The brewing crisis came to a boil when Ahmadinejad fired the clergyman in charge of the ministry of intelligence. This was the second cleric he had fired from that position in less than two years. Both had been allies of Khamenei. A few weeks earlier, Ahmadinejad pointedly sacked and embarrassed the foreign minister, another key Khamenei supporter. The hapless official learned of his own dismissal through local African media and leaders with whom he was supposedly negotiating. Khamenei showed no public reaction to the first two challenges to his authority. Even the third time, he initially sent a private letter to Ahmadinejad ordering him to reinstate the minister. When Ahmadinejad still refused, Khamenei finally decided to teach his handpicked president a lesson in power. He wrote and published a letter to the dismissed minister, ordering him to return to work. Ahmadinejad was neither copied nor even named in the missive. (For eleven days after the minister’s reinstatement, Ahmadinejad refused to go to work in protest of what he saw as an egregious interference with his power.) Websites close to Khamenei then published reports that those in “the deviationist line” had a “mole” in the ministry of intelligence and that the minister had been fired for the sin of finding and dismissing the mole! Indeed, it was alleged that the president and his allies had taken sensitive classified documents from the intelligence ministry and intended to use them against their enemies. Ahmadinejad, praised until but a few months ago as the most reliable devotee of the notion of velayat-e-faqih, refused to heed the allegedly divine commands of Khamenei.

Khamenei’s supporters have since offered a variety of theories to justify the supreme leader’s encroachment on the power of the executive (and according to the constitution, naming ministers is a clear prerogative of the president). Some have suggested that past presidents deferred to the supreme leader in choosing ministers of intelligence, defense and foreign affairs—it is Ahmadinejad who stepped over the line. A few have used a more honest “explanation,” suggesting that in Iran today the supreme leader enjoys “divine legitimacy” and speaks for God, and thus his words and wishes trump any law or tradition. One sycophantic mullah—and a Friday-prayer leader in the holy city of Meshed—declared that “all the zeros in the number of votes a person gets” mean nothing until the supreme leader “validates” the vote and appoints the man president. Another claimed that challenging Khamenei’s words is tantamount to shirk, or heresy. Yet another apologist argued that Khamenei was not elected to his post by the eighty-six-man body of experts, as stipulated by the constitution, but was “discovered” by them, clearly implying that only God, having imbued him with his saintly sagacity, can “undiscover” him. In short, the crisis is being used to jettison any vestiges of republicanism left in the constitution.

In the apparent random maze of these allegations, there is a common thread: Ahmadinejad is seen as trying to distance himself from the clergy and endear himself to the moderate middle classes of Iran. While the president’s assumption that there, in fact, exists the possibility that the democratic opposition or the wealthy and erudite will coalesce around him might be an indication he’s truly gone off the deep end, to the outside observer, the effort itself should indicate the continuing appeal of democratic ideals.

WHILE THE world is rightly rejoicing a much-belated Arab Spring (a spring that saw its first blossoms in Tehran in June 2009), in Iran, Khamenei and his allies are methodically and ruthlessly establishing the planet’s most unabashed theocratic despotism. And as many thinkers and scholars have long pointed out, the spirit and rhetoric of republican democracy is inevitably founded on respect for reason, science and the rule of law. The recent assault on the faint hints of republicanism in the Iranian constitution has been, as expected, accompanied by a frightening attack on rationalism, the social sciences and democracy as tools of “Western arrogance” intended to undermine true Islam. Just as the rise of Khomeini in 1979 bred radical Islam, the success of Khamenei in his new antidemocratic project can only reinvigorate the now-declining forces of that radicalism. Without a democratic Iran, the Arab Spring is unlikely to change the face of the region.

Most dangerously, the more isolated the regime becomes, the more intensely it needs to attain the status of at least a virtual nuclear state—one that has demonstrated the technological capacity to build a bomb should it make the political decision to do so—and use this status as a deterrent against outside pressure and domestic challenges to its hold on power. The most recent statement by the IRGC cautioning the world about the nature of the Iranian regime’s military might, touting the country’s new domestically produced and reportedly nuclear-capable warheads, is perfect evidence of that. The IAEA’s recent statement indicating it is no longer able to guarantee the peaceful nature of Iran’s nuclear program is yet another sign of Tehran’s growing capabilities. It may be that only a democratic government can genuinely solve Iran’s nuclear issue, but the road to this transition is treacherous. For, though a war of attrition between the president and the supreme leader is sure to expedite the possibility of a more open political system, it is also highly likely to beget a kind of Bonapartist resolution in which an entrenched absolutist regime led by the IRGC is the result.

Indeed, the Iranian leadership has long followed the advice of one of Shakespeare’s characters who suggested that giddy minds must be kept busy with foreign wars. The regime’s true Achilles’ heel remains the economy, and so long as it faces these domestic pressures, there will be a distinct motivation to become increasingly belligerent with the outside world and more repressive at home. Almost a million young men and women are added to the labor force each year. The Islamic Republic faces an uphill battle in its attempt to end subsidies on most basic commodities without serious social dislocation. Up until now, leaders have navigated their way out of such disruption by ensuring cash payments to the poorest strata of society. Most economists predict that the current pattern is untenable, and the false quiet of today presages a storm tomorrow. Khatami, as a self-appointed peacemaker of conflicts of late, recently attempted to once again save the regime by finding a workable compromise between Khamenei and the opposition. In a speech, he claimed that both sides have been wronged and argued that they must forgive each other. His plea has been met with cold derision from all involved.

As the economic situation worsens, Khamenei and his allies in the IRGC have the perfect opportunity to confront Ahmadinejad and wrest him from power, whether figuratively or literally. The blame game has already begun. There has been a remarkable series of revelations and claims about Ahmadinejad’s mismanagement of the economy. Government sources have declared the real unemployment rate to be above 30 percent. And the inflationary rate for basic foodstuffs is rumored to be about 25 percent. A couple of leading members of parliament have accused the government of publishing false statistics about the economy, including announced rates of inflation and economic growth. With hyperinflation on the horizon, Depression-era unemployment numbers already a reality (a high-ranking government official announced that one in three young men and women is unemployed in the country), and the democratic winds in the region continuing unabated—not to mention that Syria, the Islamic Republic’s sole regional ally, faces grave challenges—Khamenei might soon need a sacrificial lamb. And Ahmadinejad is the perfect candidate. The IRGC will no doubt be happy to oblige; the fight between a populist president and an increasingly isolated supreme leader makes the latter more and more dependent on the power and muscle of the IRGC and the gangs of street thugs and bullies it controls and uses to intimidate the disgruntled population. In the short run, then, the IRGC is in a win-win situation in this confrontation. It is only how their power will be shaped in the future that remains to be seen.

Unless Ahmadinejad has a few still-unused aces up his sleeve, it is hard to avoid the conclusion that he and his allies clearly overestimated his power and popularity. Hitherto, no one has shown any desire to defend the president. More than once, his allies threatened to bring out millions in support of his cause, but so far it has been all empty bluff and bluster. The rancorous fight between the ambitious, weakened president and the embittered, isolated Khamenei is both a symptom of a structural crisis and an added ingredient for its continuation. One can be but strategically optimistic about Iran’s future and tactically benighted about its immediate fate. 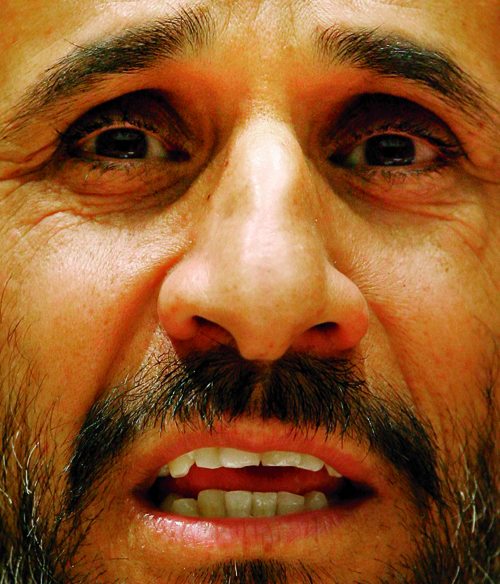