PRESIDENT OBAMA’S June 13 decision to send light weapons and ammunition to Syrian rebels reflects a fundamental reality in the dialectic of American foreign policy. Within this administration and indeed throughout official Washington, humanitarian interventionism is the inevitable default position for policy makers and political insiders. There is no intellectual counterweight emanating from either party that poses a significant challenge to this powerful idea that America must act to salve the wounds of humanity wherever suffering is intense and prospects for a democratic emergence are even remotely promising.

This reality emerges in sharp relief when one attempts to find the reasoning behind the president’s Syria decision through a process of elimination. Perhaps, one might speculate, the president decided the time finally had come to turn the tide of war decisively in favor of the antigovernment insurgents and against the regime of Syrian president Bashar al-Assad. But, no, that can’t be the driver because nobody believes Obama’s modest flow of military assistance will have a significant impact on the Syrian civil war. It would be insulting to suggest the president believes such a thing.

Perhaps, one might speculate further, Obama wanted to bolster the military position of those insurgents committed to a relatively open and pluralist nation, as opposed to the radical Islamist elements driven by jihadist passions and the dream of a theocratic nation, like Afghanistan before 9/11. But this doesn’t make sense, either. Many analysts believe the war’s jihadist groups—including Al Nusra Front, affiliated with Al Qaeda—are substantially stronger militarily than the secular rebels. It seems dubious that U.S. aid can be kept out of jihadist hands.

Perhaps there is a political desire to align government policy with public opinion. Wrong again. A Gallup poll shortly after the president’s announcement showed 54 percent of respondents opposed the president’s arms initiative, while 37 percent approved. A Pew Research Center poll released at about the same time showed that fully 70 percent of respondents opposed the idea of the United States and its allies sending arms to Syrian rebels. The Pew survey also indicated that large majorities of Americans believe the U.S. military is stretched too thin and doubt that Syria’s rebel groups would govern any better than the Assad regime.

So the decision can’t be explained by politics, nor by a desire to favor more secular rebel groups, nor by any realistic strategic aims in the region. That leaves the default explanation—that Obama turned to humanitarian interventionism because that is the foundational foreign-policy philosophy of his party and goes largely unchallenged from any serious Washington precincts. It also seems to be Obama’s own philosophy. As he said in explaining his 2011 military initiative in Libya, U.S. forbearance in the face of events there “would have been a betrayal of who we are.”

The president’s default decision on Syria raises two questions: Why did Obama feel a need to put up a pretense of trying to influence events there when in fact his actions will have little or no impact on the unfolding tragedy? And why is today’s foreign-policy discourse so bereft of any serious intellectual counterforce to the prevailing humanitarian ethos?

Partial answers to both questions can be found in the same phenomenon—the decline in nationalist sentiment within the Democratic elite. The natural counterargument to humanitarian interventionism is nationalism, the idea that America as a nation must concern itself first and foremost with its own interests and imperatives; must look after its own citizens as a top priority; and must avoid global adventures that could damage the country’s public fisc or undermine its security.

Nationalists usually ask a fundamental question when foreign adventures are proposed—whether the national interest justifies the expenditure of American blood on behalf of this or that military initiative (or this or that action that could lead to military initiatives). The fate of other peoples struggling around the globe, however heartrending, doesn’t usually figure large in nationalist considerations. The fate of America is the key.

This grates on many within the Democratic elite, who formulated a doctrine during the 1990s Balkans crisis that favored humanitarian considerations for overseas actions over nationalist considerations. The rights and well-being of the world’s people superseded for many the rights and well-being of the American populace. Indeed, as writer Robert D. Kaplan has observed, the liberal embrace of universal principles as foreign-policy guidance “leads to a pacifist strain . . . when it comes to defending our hard-core national interests, and an aggressive strain when it comes to defending human rights.”

This is pure Wilsonism. “I hope and believe,” declared Woodrow Wilson in a speech before Congress in which he admonished Americans to embrace U.S. involvement in World War I, “that I am in effect speaking for liberals and friends of humanity in every nation. . . . I would fain believe that I am speaking for the silent mass of mankind everywhere.” When the United States later entered the war, Wilson bragged that his country was not motivated by any national interest. “What we demand in this war,” he stated, “is nothing peculiar to ourselves. It is that the world be made fit and safe to live in.”

This Wilsonian humanitarianism now is the bedrock philosophy of the Democratic Party to such an extent that even President Obama, who harbors an instinctive skittishness over the risks in interventionist adventurism, feels a need to placate it with meaningless action on Syria. Although the matter was debated heatedly within the administration, the default position prevailed.

Which raises a question: Where is today’s Henry Cabot Lodge? Lodge, a senator from Massachusetts and chairman of the Senate Foreign Relations Committee when Wilson sought to get America into the League of Nations, went after Wilson and his League with a vengeance. His weapon: American nationalism. “I must think of the United States first,” he declared on the Senate floor in August 1919. “I have loved but one flag, and I cannot share that devotion and give affection to the mongrel banner invented for a league.” Lodge didn’t oppose American interventionism in principle, only when it was untethered from U.S. national interests. He saw clearly that Wilsonism in its purest form and American nationalism are antithetical.

David Rothkopf sees that too, and that’s why he rails so viciously against American nationalism. Rothkopf, CEO and editor at large of Foreign Policy magazine, personifies the Davos-culture, humanitarian-interventionist sensibility of our time, which wishes to obliterate the last vestiges of what he calls “Westphalian nation-state nonsense.” Writing in Foreign Policy, Rothkopf laments that his country is among those that “celebrate individuality to a fault.” Its “market ideology”—more Charles Darwin than Adam Smith, as he puts it—dismisses those who fall behind as “merely part of nature’s grand equation.” Having erected this caricature of a heartless nation, Rothkopf indelicately gives it a name—“frontier fuck-you-ism”—and suggests even those of his fellow countrymen who don’t embrace it in domestic affairs certainly do so abroad. The result is our “narcissistic, head-in-the-sand nation-statism,” which “is putting us at risk.”

Rothkopf is a smart guy, and he seems to perceive that this “Westphalian nation-state nonsense” he decries poses, potentially, the only serious intellectual counterweight to the humanitarian interventionism that has captured the Democratic Party. No doubt he also perceives that, while there is no longer any serious debate on the matter within his elite circles or even in today’s normal political discourse, nationalist sentiment remains robust and lively among ordinary Americans going about their daily routines and endeavors. That must be why he turns so pugilistic when discussing the matter.

That’s understandable. History tells us that when elite thinking opens a wide gap between national policy and popular sentiment, a reckoning usually is in the works. The Democrats’ default position on foreign policy may not be subject to any serious counterweight now, but that doesn’t mean one can’t emerge.

Meanwhile, over in the Republican Party, the default territory is held by neoconservatives, who harbor the same affinity for foreign adventurism but for different reasons. And, with the exception of Kentucky senator Rand Paul, even those in the GOP who don’t embrace the neocon label refrain from questioning the neocon position with any force. Thus, the Republican elite too faces a rank and file increasingly uncomfortable with its interventionist notions. That means it probably also faces an eventual political reckoning.

Indeed, Georgetown’s Paul R. Pillar, in this issue’s cover article, posits the view, which he develops with plenty of analytical rigor, that we actually are living in a global age of nationalism, in which fealty to the nation-state is driving world events to a far greater extent than many American intellectuals are willing to recognize. He sees this as a compelling political sentiment in America just as it is in other regions. And author Rajan Menon, who teaches at the City College of New York/City University of New York, sees nationalism as a significant geopolitical force in his survey, also in this issue, of the future of Asia.

So nationalism is not dead, either here or abroad, and it seems likely to reemerge in America’s future as a counterweight to that humanitarian interventionism that has so thoroughly captured the Democratic Party and political discourse in general. The question is when—and what kind of crisis in U.S. foreign adventurism will trigger it. 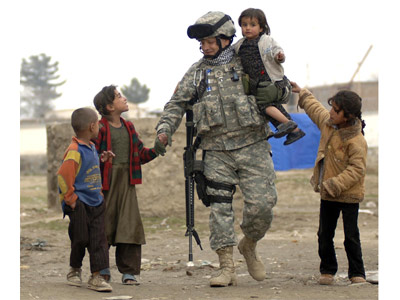 Pullquote: Why is today’s foreign-policy discourse so bereft of any serious intellectual counterforce to the prevailing humanitarian ethos?Essay Types: The Realist