The Anarchic Republic of Pakistan THERE IS perhaps no other political-military elite in the world whose aspirations for great-power regional status, whose desire to overextend and outmatch itself with meager resources, so outstrips reality as that of Pakistan. If it did not have such dire consequences for 170 million Pakistanis and nearly 2 billion people living in South Asia, this magical thinking would be amusing.

This is a country that sadly appears on every failing-state list and still wants to increase its arsenal from around 60 atomic weapons to well over 100 by buying two new nuclear reactors from China. This is a country isolated and friendless in its own region, facing unprecedented homegrown terrorism from extremists its army once trained, yet it pursues a “forward policy” in Afghanistan to ensure a pro-Pakistan government in Kabul as soon as the Americans leave.

For a state whose economy is on the skids and dependent on the IMF for massive bailouts, whose elite refuse to pay taxes, whose army drains an estimated 20 percent of the country’s annual budget, Pakistan continues to insist that peace with India is impossible for decades to come. For a country that was founded as a modern democracy for Muslims and non-Muslims alike and claims to be the bastion of moderate Islam, it has the worst discriminatory laws against minorities in the Muslim world and is being ripped apart through sectarian and extremist violence by radical groups who want to establish a new Islamic emirate in South Asia.

Pakistan’s military-intelligence establishment, or “deep state” as it is called, has lost over 2,300 soldiers battling these terrorists—the majority in the last 15 months after much U.S. cajoling to go after at least the Pakistani (if not the Afghan) Taliban. Despite these losses and considerable low morale in the armed forces, it still follows a pick-and-choose policy toward extremists, refusing to fight those who will confront India on its behalf as well as those Taliban who kill Western and Afghan soldiers in the war next-door. An army that has received nearly $12 billion in direct military aid from the United States since 2001, and has favored-nation status from NATO, still keeps the leaders of the Afghan Taliban in safe refuge. Pakistan’s civilians, politicians and intellectuals are helpless; they cannot make the deep state see sense as long as the West continues its duplicitous policies of propping up the military-intelligence establishment in opposition to popular society while demanding that the Pakistani civilian government wrest back control of the country.

Now there is a serious and deadly overlap—Pakistan’s extremists are determined to topple the political system and the deep state. The army is not oblivious to this reality, but it seems unwilling or unable to tackle the real issues at hand. “This is nothing but a creeping coup d’état by the forces of darkness, a coup that will spare no one,” wrote analyst Kamran Shafi in the Dawn newspaper this summer. “It is them against everyone else—an Islamic Emirate of Pakistan is the goal,” he added.

The deep state is failing its own people, who are in turn becoming more traumatized by the incessant violence, the lack of justice or security, and the perennial economic crisis. This only leads the civilian government to be even more inept, inconsequential and incapable of improving governance.

THE MOTHER of all insurgencies is taking place in the seven tribal agencies of Bajaur, Mohmand, Khyber, Orakzai, Kurram, and North and South Waziristan in the northwest-frontier region where the Pakistani Pashtun tribes—under the nomenclature of the Pakistani Taliban—are at war with the state. Amnesty International recently said that 4 million Pakistanis in this and adjoining regions are living under Taliban rule. Every time the army claims to have cleared one agency, the Taliban rebound in another with a vengeance.

Also operating from these northern bases are a dozen groups from Kashmir, Karachi and Punjab which were once trained by the military’s Inter-Services Intelligence (ISI) to fight in Indian Kashmir. They have now turned against their former handlers. The Pashtun Taliban have joined with their more sophisticated, better educated urban comrades to plan horrific acts of terrorism in Pakistani cities. Together they want to overthrow the state and establish an extremist Islamic system.

The Pakistani Taliban do not just kill police and soldiers in their barracks or even innocent civilians in mosques. On June 8 they launched a brazen attack on a convoy of trucks carrying NATO war materials for troops in Afghanistan in heavily populated northern Punjab—torching 50 vehicles. There is now talk of the Taliban shutting down Karachi port, where 80 percent of NATO supplies arrive. The public fear is that the army is losing control of the country as the extremists become ever stronger, ever more daring and ever more capable.

If local tribesmen even attempt collaboration with the state, deadly reprisals ensue. In the supposedly “Taliban-free” Mohmand Agency, people received U.S.-donated foodstuffs on July 8. The next day, while tribal elders gathered to discuss helping the army combat the Taliban, two suicide bombings killed over 100 people and wounded another 115.

Since 2004, the area has been hemorrhaging people. Out of a total population of 3.5 million, more than 1 million have fled the tribal agencies while another half a million left during the recent fighting only to become internally displaced refugees in nearby towns.

Amid the Pakistani Taliban, vicious Sunni sectarian groups prosper, galvanizing hatred of all minorities, Muslim and non-Muslim alike. The Ahmadi sect follows the teachings of a nineteenth-century religious reformer, promoting a peaceful variant of Islam. And yet in the 1970s, the Pakistani government declared the Ahmadis a non-Muslim minority and many Pakistanis today view them as heretics to Islam. On May 28 in Lahore, upwards of nine gunmen and suicide bombers blasted their way into two mosques and killed 90 Ahmadis, wounding another 110. The other minority groups, whether they be Shia, Christian, Hindu or Sikh, have lived in even greater fear since.

The Christian community, which makes up less than 2 percent of the population, is already a target. In July 2009, eight Christians were burned alive in the small Punjab town of Gojra, and in riots that followed an entire Christian neighborhood was scorched. The 17 militants arrested for these crimes were not brought to trial, and the police, facing local pressure, later let them go. A year later, riots erupted again in Faisalabad, Punjab, after two Christians were killed while being held in police custody. Since then, any Christians who can have been seeking political asylum abroad in droves.

An even-worse fate has befallen Shia Muslims. Prominent Shia technocrats—politicians, doctors, architects, bureaucrats and judges—have been singled out for assassination in all major cities, while in December 2009, 43 Shias were massacred by Sunni extremists in Karachi.

Thus the Pakistani Taliban have a two-pronged offensive: the first is to politically undermine the state and its organs through terror; the second is to commit sectarian violence against all those they believe are not true Muslims. This intolerance has developed deep roots in Pakistan over the past three decades, and it has now been boosted by the jihadist policies of al-Qaeda and the Pakistani Taliban. The government’s inability to deal with sectarian threats has led to some Muslim groups arming themselves and taking the law into their own hands. This only leads to further loss of control by the state.

AS ISLAMIC extremist violence spreads, the very fabric of the country is falling apart. Mapping how widespread and varied the violence is gives but a hint of the disaster facing Pakistani society. Growing poverty, inflation and unemployment have led to an unprecedented increase in suicides—sometimes of entire families. One hundred ninety-one people killed themselves in the first six months of this year; at more than one death a day, it is one of the highest rates in the world. And when 113 of those happen in the country’s richest province (Punjab), it is obvious not a single Pakistani is surviving this unscathed—no matter how seemingly privileged. Violence against women is also on the rise; 8,500 violent incidents took place last year. One thousand four hundred of those were murders. Another 680 were suicides.

Freedom of information is quickly coming to a halt. Journalists receive regular threats if they do not report the statements of extremist groups, while extremist literature, newspapers and pamphlets continue to flood the market with no attempts by the state to stop them. And now leading electronics markets in major cities have been repeatedly bombed and shop owners warned to stop selling computers and TVs. Rather than combat the threat, the government has succumbed, closing down Facebook for three weeks starting in May and announcing that major web sites like Google and Yahoo will be censored for “anti-Islamic material.” This is shuttering a vibrant society and slowly turning a country that long strived for democratic openness into a closed state held hostage by radical Islam.

Meanwhile, the lack of services is creating its own anarchy. In Karachi, with a population of 18 million, violence is so endemic and its perpetrators so diverse that it is difficult to summarize. What we do know is that beyond Islamic extremism, the city is in the grip of heavily armed mafias and criminal gangs, who kill over control of water supplies, public transport, land deals and the drug trade. Car theft is rampant. The most lucrative business is kidnapping for ransom. The independent Human Rights Commission of Pakistan reports that there were 260 targeted killings in Karachi in the first six months of this year, compared to 156 last year. Eight hundred eighty-nine murders were reported in the same period. Because the city is the melting pot of the country, much of the violence is between ethnic groups who live in virtual ghettoes and compete for the scarce resources of the city. 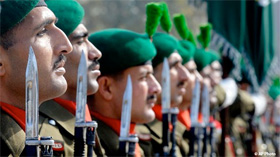 Pullquote: The [Pakistani] public fear is that the army is losing control of the country as the extremists become ever stronger, ever more daring and ever more capable.Essay Types: Essay