CARTOGRAPHICAL CONCEPTIONS of Asia obscure what, in strategic terms, is a “Greater Asia.” It stretches from eastern Iran through Central Asia and South Asia to Indonesia, and from the Aleutian Islands to Australia, encompassing the Russian Far East, China, Japan, the Korean Peninsula and Southeast Asia. It is connected by multifarious transactions, cooperative and adversarial, resulting from flows of trade and investment, energy pipelines, nationalities that spill across official borders, historical legacies that shape present perceptions, and shifting power ratios, within and among states. This is not a closed system; after all, many Greater Asian states are closely tied to the United States, a non-Asian Pacific state whose prowess enables it to shape power balances and political and military outcomes across the region. Yet America will face unprecedented changes in the distribution of power in Greater Asia’s eastern theater and disruptions in the western theater, as domestic constraints—economic and political—curtail its choices. That, in turn, will necessitate strategic reassessments by states in the region, particularly those that have relied on American protection. All this will undermine long-standing analytical frameworks and policies.

These looming changes cannot be fully understood through the prism of the grand theories devised to depict the post–Cold War world, including the three most prominent ones: the “Clash of Civilizations”; the “End of History”; and globalization. All three, underpinned by reductionism and historicism, miss the manifold, complex and contradictory forces shaping Greater Asia.

Samuel P. Huntington’s perception of persistent civilizational clash missed the reality that in Greater Asia states, not civilizations, remain the principal wellsprings of change. True, something akin to civilizational conflict is visible in Afghanistan, Myanmar, Kyrgyzstan, Iran, Sri Lanka, China, the Philippines, Pakistan and Malaysia. But, while it may threaten the cohesion of such countries, it has not integrated them into any civilizational blocs. In Asia, the effects of culture and religion are fissiparous rather than integrative and will remain so.

There is no Hindu civilization capable of mobilizing Asian loyalties and resources and aligning states’ policies to India’s benefit. Within India, Hindu nationalism—Cassandras’ cries notwithstanding—has failed to overcome the abiding appeal of secularism among the country’s founding doctrines. Though imperfect in practice, secularism has more purchase in Indian politics than ideologies based on religion and remains the signature of the Congress Party, India’s only national political organization. Partly because of its association with the North’s “Hindu heartland,” the Hindu nationalist Bharatiya Janata Party (BJP)—previously the Bharatiya Jana Sangh—has shallow roots in southern India, the locus of much of the country’s innovation and high economic growth, and has failed to capture the national imagination. Only twice (in 1977–1980 and 1999–2004) has the BJP formed a multiyear national government. Singly or through coalitions, the Congress Party has dominated India’s national politics.

India’s 170 million Muslims, nearly as numerous as their Pakistani coreligionists, represent another barrier to Huntington’s view of a Hindu civilization. It’s hard to imagine a bigger threat to India’s future than millions of Muslim citizens so fearful of ascendant Hindu chauvinism that they can overcome differences of language, regionalism and theological pluralism within their faith. But no such Hindu nationalism has gained sufficient traction in the country to raise such fears among Muslims. Hindutva—the inchoate ideology that conflates Indian and Hindu—has never attained significant influence. Gujarat State’s chief minister, Narendra Modi, a BJP luminary and aspiring prime minister, has been undermined by his association with a 2002 anti-Muslim pogrom in Gujarat. And various other militant Hindu movements—among them the Rashtriya Swayamsevak Sangh and the Shiv Sena—have never gained national followings.

Even weaker is the transnational potential of Hinduism, a capacious creed with an array of deities, doctrines and rituals that is further fractured by differences rooted in region, caste, class and language. While Hindu communities exist in Malaysia and Singapore and Hinduism’s imprint is evident in Bali and elsewhere in Southeast Asia, Asia’s non-Indian Hindus would find their prospects imperiled, not advanced, by becoming associated with a religion-based political movement led by gargantuan India. Furthermore it would be self-defeating for India to adopt a civilizational strategy at a time when it will need allies to counterbalance a rising China.

A Sinic civilizational bloc is equally implausible. Confucianism’s transnational allure will not match the emotional pull of nationalism, particularly in Japan and Vietnam, still influenced by their conflict-laden history with China. Moreover, a campaign by China to organize a Han civilizational coalition would antagonize its minorities, particularly the Tibetans and Uighurs, but also the Hui, whose rising nationalism already poses problems. China’s minority nationalities constitute less than 10 percent of China’s population, but they inhabit more than half its landmass. Progress in education and economic development has strengthened anti-Han nationalism, not weakened it through assimilation. Tibetans have been engaged in serial self-immolations (119 since 2009) and riots; bombings and demonstrations have erupted in the autonomous region of Xinjiang, the Uighurs’ homeland and site of bountiful energy deposits. Tibet and Xinjiang are remote from China’s eastern power centers. Tibet borders four countries, including China’s preeminent Asian rival, India. Xinjiang borders eight. Geography and ethnicity conspire to compound the challenge of maintaining the state’s control.

The Chinese leadership can contain restive minorities through repression and co-option, but changes in the surrounding region could make it harder. New states have risen in the Turkic Muslim regions of Central Asia once ruled by Russia; this area neighbors Xinjiang and constitutes a kindred cultural zone. Separatist Uighurs also can seek succor in an unstable Afghanistan. China’s minorities could prove even harder to handle should a prolonged economic crisis produce political upheaval in the East, weakening the government’s authority. Then minorities could become even more resentful over irritants such as Han Chinese migration and the building of Han-majority urban beachheads— massive regime policies since 1949. Unrest and violence in Tibet and Xinjiang could expand significantly.

Sinic civilization, like its Hindu analog, cannot undergird an effective foreign policy. The most receptive constituency likely would be the thirty-four million “overseas Chinese” in the Asia-Pacific, with about half residing in Indonesia, Malaysia and Thailand. But these groups are regarded with envy and often hostility in host countries because of their share of national wealth. They would be ill served by becoming adjutants to what would look like a culture-based quest for primacy by a country already viewed with trepidation. The persistent political divide between China and Taiwan illustrates the limits of cultural kinship in producing political influence. Taiwan would scarcely join a Beijing-led civilizational coalition, which would likely be directed against the United States, the country most critical to continued Taiwanese independence, or at India, China’s most powerful Asian rival. If the communities and countries culturally closest to China are poor candidates for a civilization-based strategy, Beijing would have even less success with those further removed and with a history of conflict with China, such as India, Japan and Vietnam.

An Asian Islamic bloc is the least likely, as there is no obvious candidate to serve as a hub. Pakistan and Indonesia, which have heft in size and population, come closest, but an Islam-centered Asian strategy would further unsettle a Pakistan already awash in violence stemming from disputes over who is a true Muslim, what Islam demands of its devotees and the rights of non-Sunnis (Ahmadis and Shia). As for Indonesia, its efforts to orchestrate an Islamic coalition would estrange non-Muslims in Bali, Maluku, North Sulawesi and especially Papua, where nationalism and separatist sentiment remain resilient.

FRANCIS FUKUYAMA’S “End of History” thesis—that liberal-democratic capitalism remained the sole global ideology following Soviet Communism’s demise—fares no better as a guide to Asia’s future. In Iran, Central Asia, Russia, Singapore and China, there is widespread ambivalence toward democracy. Some leaders, invoking “Asian values,” attack the materialism and hyperindividualism they see in liberal democracy and criticize its lack of regard for order, hierarchy and social obligation. Denouncing democracy promotion as a push to advance American influence, they emphasize inconsistencies that arise when pragmatic interests and democratic principles collide. Russia’s government has developed a variation on this theme—a mélange of statism, nationalism, Orthodox Christianity, social conservatism and critiques of Western human-rights norms. These sentiments resonate with many Russians, as public-opinion experts have noted, and may have greater appeal than the street protests of big-city anti-Putin liberals suggest.

The “Asian values” manifesto, designed to forge a coalition against the United States throughout much of Greater Asia, has not had much effect. Some of its proponents, such as Singapore, rely on America for their security and conduct multiple transactions with it, some of which have cultural significance. Still, the weakness of this approach does not mean the people of Greater Asia are ready to embrace democracy over authoritarian alternatives. Consider the contrast between democratic India’s checkered economic record, authoritarian China’s stunning economic successes, the galloping growth rates South Korea and Taiwan achieved when neither was democratic, Vietnam’s brisk economic growth, and Singapore’s enviable living standards and clean government. The democracies in Asia have not been most successful at instituting economic reforms. China, unencumbered by election cycles or opposition parties, has instituted reforms more rapidly than India. 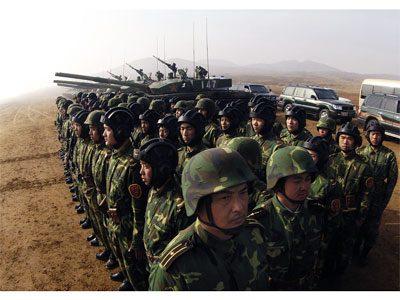 Pullquote: Greater Asia is like a big bus crammed with passengers...the bus has several steering wheels and no consensus on a common course, least of all among the drivers.Essay Types: Essay