WITH THE recent downturn in U.S.-Russian relations, observers in both Washington and Moscow have remarked upon the cyclical nature of this key bilateral relationship. As Fyodor Lukyanov, a leading Russian commentator, noted in late 2012, “If we look at the relationship since 1991, it’s the same cycle all the time, between kind words and inspiration and deep crisis. Yeltsin, Clinton, Bush, Putin, Obama, it’s the same pattern.” Indeed, the phases of high hopes and expectations in the years 1991–1994, 2000–2003 and 2009–2011—followed by deep disappointment in the intervening and subsequent years—do seem to represent a cyclical pattern.

But viewing U.S.-Russian relations in terms of cycles or patterns is misleading. It implies that the relationship is governed by immutable forces beyond the control of policy makers—like the laws of physics or the business cycle. But the problems in U.S.-Russian relations are man-made, and therefore their resolution lies in the hands of the respective political establishments in Washington and Moscow. That is not to say it would be easy to fix them, or that such a fix is likely anytime soon. In fact, the opposite seems true. However, since agency, not structure, is the key determinant, policy makers bear the responsibility for improving this state of affairs and have it within their power to do so.

To understand better the reasons for the ebbs and flows in bilateral relations, it’s important to recognize the peculiar way in which both sides assess them. Officials and nongovernmental observers in both countries measure the relationship between the two countries by looking at the “deliverables” it produces. In other words, when the two sides are forging new agreements or resolving global challenges, their relationship is seen to be improving. When they are not concluding new bilateral deals and differ on significant global issues, the relationship is perceived as deteriorating.

The “reset” period (2009–2011), so dubbed following Vice President Joe Biden’s invocation of this metaphor at the Munich Security Conference in February 2009, is a case in point. Those years saw major deliverables produced at an impressive pace. The key agreements signed in that period include: the landmark New Strategic Arms Reduction Treaty (New START); the so-called 123 agreement on civil nuclear cooperation; agreements on Afghanistan transit, including the rail-based Northern Distribution Network and an overflight arrangement that as of January 2013 allowed for more than 2,500 flights across Russian air space carrying more than 460,000 U.S. military personnel; an amendment to the Plutonium Management and Disposition Agreement, providing for the safe disposal of enough weapons-grade plutonium for seventeen thousand nuclear warheads; close cooperation in the effort to rein in Iran’s nuclear ambitions, including unprecedentedly comprehensive UN Security Council sanctions and work toward a diplomatic solution; Russia’s cancellation of its contract with Iran for the S-300 surface-to-air missile systems, which, if delivered, would have been highly destabilizing; Russian WTO membership, eighteen years after it initiated its bid, in large part due to significant progress on bilateral trade issues; and an agreement on visas that makes it easier for Americans and Russians to visit and do business in each other’s countries. Cooperation increased across a wide range of issues addressed by the nearly twenty working groups of the Bilateral Presidential Commission, which was created in mid-2009, including on counterterrorism (such as joint exercises simulating a hijacked plane over the Bering Strait), global health, energy efficiency and counternarcotics measures. Outside those institutionalized channels, deliverables also came in the form of Russian helicopters for both the Afghan National Army and for peacekeeping in Sudan; the positive outcome of the NATO-Russia Council’s summit at Lisbon in 2010; and the first joint Antarctic inspections.

Many of these deliverables were critically important for both U.S. and Russian national security. Indeed, that was probably the most productive period of cooperation between the two countries in the history of their post-Soviet relationship. But the use of deliverables as a gauge of bilateral ties betrays the underlying fragility of the relationship itself. When the two capitals are not focused on deliverables, more fundamental problems in the relationship rise to the surface.

The most corrosive of these is the reality that elements within both countries’ national-security establishments continue to view each other as adversaries, almost twenty-five years after the Cold War ended. These attitudes are most overtly manifest in the persistence of “mutually assured destruction” (MAD) as the paradigm that defines the nuclear relationship. The notion that only guaranteed retaliation prevents one side from threatening the other’s interests seems like an absurd anachronism in a world where the bipolar standoff between the United States and the Soviet Union is a distant memory. But the worst-case-scenario assumptions it creates remain a persistent part of today’s security dialogue. Take the current dispute over missile defense. If we strip away all the coded rhetoric, Russia essentially is asking for guarantees that it can effectively annihilate the United States even after Washington attempts to take out Russia’s entire nuclear arsenal. U.S. officials issue repeated reassurances to Moscow that it could still destroy the United States even if Washington tried to neutralize Russia’s hundreds of deployed strategic nuclear weapons through a “bolt from the blue” disarming first strike. The mere existence of this kind of dialogue speaks volumes about mutual suspicion of intentions.

WITHOUT DELIVERABLES, both sides turn their attention to the yawning gap between Washington’s expectations about Russia’s post-Soviet political development and Russian realities that have not conformed to those expectations. Many key U.S. partners have far worse human-rights records and not even the modicum of democratic procedure that exists in Russia today—Saudi Arabia and China being just two examples. However, due to a combination of Russia’s own international commitments made in the 1990s and American and European expectations created by the “transition” paradigm that posited a smooth shift from Soviet Communism to market democracy, Russia’s democratic shortcomings have a far greater impact on its relations with the United States. The commitments primarily stem from Russia’s membership in the Organization for Security and Co-operation in Europe, a grouping that grew out of the Helsinki accords, and the Council of Europe, a regional human-rights body. Both created additional obligations regarding, and intensified oversight of, human rights and democracy in Russia.

In the absence of major new deliverables, the U.S.-Russian rivalry in post-Soviet Eurasia also comes to the fore. Some U.S. discomfort with Russia’s relationships in its neighborhood is certainly warranted. Since 1991, Russia often has acted with a heavy hand. But it was clear by the end of the 1990s that Washington’s nightmare scenario—Russia rolling back the sovereignty of the newly independent states and forming a new anti-Western bloc—was not going to materialize. Today, the U.S. objective of “bolstering sovereignty” in Russia’s “near abroad” devolves at times into balancing games and outright paranoia about any degree of Russian influence in the region. And Washington often seems to operate on the assumption that, if nations in the region cooperate with Moscow, the result inevitably will be the imposition of decisions on Russia’s neighbors against their will. Many in Moscow believe Washington lends its support to “anti-Russian” politicians in order to limit Russian influence. In other words, Moscow sees the specter of containment when Washington thinks it is simply backing freely elected leaders.

The reset, despite all the deliverables outlined above, did not address these fundamental flaws in the relationship. In retrospect, that period was remarkable in that it demonstrated that the U.S.-Russian relationship can produce a large number of mutually beneficial agreements even without any serious reconciliation effort.

But it is important to note what brought about the uptick in deliverables in 2009–2011. The term used here and elsewhere to describe the U.S.-Russian relationship in that period—the reset—is really more accurately a description of what the Obama administration did upon taking office: it significantly changed U.S. policy toward Russia. The George W. Bush administration’s Russia policy, especially in the second term, reflected a lack of interest in bilateral cooperation on the international-security issues central to the relationship, particularly arms control. During that period, the United States also tried to influence Russian policies by linking unrelated issues. For example, after the August 2008 war in Georgia, the administration pulled the 123 agreement out of the congressional review process. Also, the Bush administration, or elements within it, pursued policies seemingly designed to antagonize Russia gratuitously. The geopolitical gamesmanship following the “color revolutions” in Georgia and Ukraine that culminated in the NATO Bucharest Summit Declaration is probably the most significant case in point. That document, a product of direct negotiations among heads of state, declared unequivocally that Ukraine and Georgia “will become” NATO members. It’s easy to see how Moscow read that as reflecting NATO’s intent to impose membership on Russia’s neighbors, regardless of their preparedness for membership or their populations’ support for it.

Upon taking office, the Obama administration promptly reversed these trends. The new president’s “Prague agenda” of nuclear nonproliferation and arms control, as well as his determination to pursue a multilateral solution to the Iranian nuclear problem, generated significantly more engagement among senior decision makers of the two countries. The Obama team also eschewed linkages of unrelated issues, which were judged to have been counterproductive based on Bush’s track record. In the case of the linkage between Georgia and the 123 agreement noted above, the outcome was no movement on Russia’s actions in Georgia and no U.S.-Russian civilian nuclear cooperation. So the administration resolved that it would not let disagreements over one set of issues preclude cooperation on other issues. But senior officials also made clear they would not bargain away unrelated issues merely for the sake of cooperation with Russia. Obama continued to articulate America’s interest in Russia’s democratic development, and he supported Russian civil society even as his government worked with Russian officials on key international-security issues. The administration also, headlines to the contrary notwithstanding, did not let engagement with Russia affect relations with U.S. allies or other partners in Europe and Eurasia. 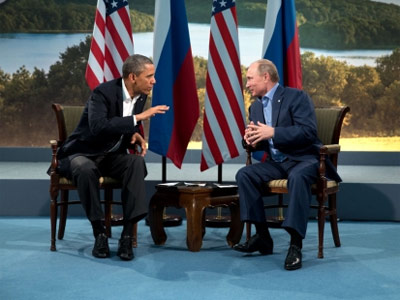