Then there are the unprecedented tests awaiting China’s leaders on the global stage. The nation’s economic interests are taking China’s government and state-owned companies into politically riskier countries. Meanwhile, a revolution in oil production and drilling techniques is attenuating U.S. dependence on oil from the Middle East. In fact, the United States has reduced its imports from OPEC countries by more than 20 percent just in the past three years and could become the world’s largest oil producer by 2020 and energy self-sufficient by 2035. China, on the other hand, is becoming more dependent on imports from countries like Saudi Arabia, Iran, Iraq, Libya, Sudan and Venezuela. Beijing has so far managed to maintain a policy of “noninterference” in the affairs of other countries, but as Washington becomes less willing to engage in the Middle East, China will find itself forced by its thirst for energy to take up the slack, involving Beijing in conflicts it has little experience managing.

Complicating matters further, although China has investment partners, it has no powerful allies—that is, governments that share Beijing’s political values and have the capacity to make a meaningful contribution to China’s security challenges. Even Russia, China’s frequent partner in UN Security Council obstruction, is unlikely to deepen its military ties with Beijing. The two sides continue to compete for influence in the Central Asian states that lie between them, and deep distrust of the other’s intentions remains the dominant sentiment in both militaries. Cooperating to thwart U.S. plans is easy. Working to change the international status quo is much more difficult. Nor can China count on an increase in its soft power to extend its influence. Mandarin Chinese is unlikely to replace English as the language of global popular culture, and China lacks the ideological appeal that once drew a large segment of the developing world toward the Soviet Union.

In a world where governments can’t afford to go it alone to protect their interests, China will struggle to build durable partnerships that extend its power.

WASHINGTON HAS settled on a smart approach to the unpredictability of China’s future, one that combines direct engagement of China’s leaders with a hedging strategy that deepens U.S. political, trade, investment and security ties with many of China’s neighbors. This is the aim of the “rebalancing” to Asia, a plan which explicitly recognizes the U.S. commitment to play a comprehensive long-term role in a region that can drive global growth over the next generation, but which will also face a number of developing security challenges without the institutional framework—no Asian Union, no Asian NATO—to effectively manage them. East Asia, in particular, is home to China, the emerging powerhouse, South Korea, a dynamic, developed country, and Japan, still a leader among industrialized nations. Yet, it is also the arena in which China’s rivalries with Japan, India and a number of Southeast Asian nations will play out—and where the North Korean wild card will continue to generate uncertainty and risk.

The rebalancing will continue the process of shifting a significant percentage of U.S. naval assets toward Asia, but a central component of this strategy is completion of the Trans-Pacific Partnership (TPP), an enormous trade deal involving more than a dozen Pacific Rim countries. Crucially, Japan’s new government, led by Prime Minister Shinzo Abe, has overcome traditional Japanese resistance to multinational agreements that pry open sensitive economic sectors to begin to negotiate membership. The U.S.-South Korean free-trade agreement entered into force last year.

Some in China see the TPP as an attempt to contain China’s expansion, and there is little chance that Beijing will push for early membership since the agreement would open areas of its economy that are not yet strong enough to withstand foreign competition. Even if President Xi does lead China toward the TPP faster than expected, the complexities of the multilateral negotiating process ensure that China won’t be able to join for some time to come. There is nothing in the TPP, however, that prevents members from forging trade and investment agreements with China or any other nonmember, allowing the United States to use it as a hedge against China’s growing regional power while leaving the door open for deeper engagement in the future. That’s the right balance.

Though the Obama administration has the right strategy, it has not given it the priority it deserves and is far too easily distracted by other issues, particularly in the Middle East. Washington can hardly afford to ignore developments in Syria, Egypt and other hot spots. The future of the euro zone will have far-reaching effects on the U.S. economy. Developments in Latin America are vitally important for U.S. security and prosperity. Yet, work on the rebalancing has barely begun, and opportunities to engage China directly have not received the energy and care they deserve.

America and China are the two largest economies, two leading trading nations and two biggest polluters. America is the world’s largest debtor nation, China the largest creditor. It is impossible to rebalance the global economy, slow climate change, meet emerging security threats, and promote peace and prosperity in Asia without as much cooperation as possible between the leading established and emerging powers. This work is in the interests of both countries and both governments.

Presidents Barack Obama and Xi Jinping have a lot to talk about. The future of the largest bilateral trade relationship in history, the potential for security cooperation for mutual benefit, the future of the Korean Peninsula, containment of conflicts in cyberspace, opportunities for joint development of energy-efficient technologies as a means to stoke economic growth and combat climate change, and a hundred other subjects should fill the early agenda. And make no mistake: it is the presidents themselves who should lead this effort to give it the urgent attention it deserves.

It is easy enough to list the ways in which U.S. and Chinese interests differ. China’s leaders will not accept international responsibilities that compromise their ability to maintain stability at home. They will continue to allow the Chinese currency to appreciate at a pace designed to protect China’s development, not one intended to help Washington balance its books. They will not accept criticism of their human-rights policies or of their approach to Taiwan or Tibet.

For their part, U.S. leaders will continue to press China to accept more responsibility for helping to manage security threats that weigh on both the U.S. and Chinese economies. They will continue to insist that China protect intellectual-property rights, abide by trade and investment rules, and work to resolve territorial disputes with its neighbors that might flare out of control. And U.S. officials will continue to insist that China grant its citizens greater freedoms, even if they know that Beijing will resist.

These sources of disagreement are obvious, but they should not prevent the two governments from improving their relations wherever possible. Failure to make progress in one area should not slow work on another. In today’s world, much will depend on the willingness and ability of America and China to work together wherever they can—for their own benefit and for the world’s. 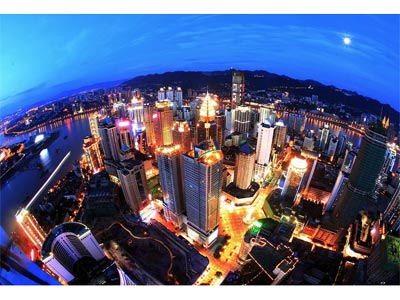