A Chinese road crew works in Tajikistan.PRESIDENT OBAMA’S late 2011 announcement of his administration’s pivot to Asia marked a sea change in America’s geopolitical posture away from Europe and the Middle East to Asia and the Pacific Rim. Reflecting the growing strategic repercussions of China’s rise, the move presages a new era of great-power politics as the United States and China compete in Pacific waters. But is the United States looking in the right place?

A number of American strategists, Robert D. Kaplan among them, have written that a potential U.S.-Chinese cold war will be less onerous than the struggle with the Soviet Union because it will require only a naval element instead of permanent land forces stationed in allied countries to rein in a continental menace. This may be true with regard to the South China Sea, for example, or the Malacca Strait. But it misses the significance of the vast landmass of Central Asia, where China is consolidating its position into what appears to be an inadvertent empire. As General Liu Yazhou of China’s People’s Liberation Army once put it, Central Asia is “the thickest piece of cake given to the modern Chinese by the heavens.”

For most of its unified history, China has been an economically focused land power. In geopolitical terms today, China’s rise is manifest particularly on land in Eurasia, far from the might of the U.S. Pacific Fleet and Washington’s rimland allies—and far also from the influence of other Asian powers such as India. Thus, Western policy makers should be dusting off the old works of Sir Halford Mackinder, who argued that Central Asia is the most pivotal geographic zone on the planet, rather than those of Alfred Thayer Mahan, the great U.S. strategist of sea power. Greater attention needs to be paid to China’s growing presence in Central Asia if the United States is to understand properly China’s geopolitical and strategic rise.

Indeed, to the extent that China is able to challenge America’s naval position in the Pacific, it will be because it has consolidated its land position in Central Asia and feels more secure on that flank to confront the United States at sea. As Kaplan has written, “Merely by going to sea in the manner that it is, China demonstrates its favorable position on land in the heart of Asia.”

Looking at the arc of Chinese history, China has never been a naval power. Aside from the fifteenth-century explorer Zheng He’s naval expeditions, Chinese empires have traditionally focused on their land power. And even Zheng He, for all his skills as a naval adventurer, was eventually shored by the Haijin edict that marked China’s retreat from the sea. The focus for Chinese imperial dynasties was maintaining the integrity of their massive state.

This fixation with territorial authority is something that persists to this day with the current Chinese Communist Party’s preoccupation with domestic economic growth. This is mostly a survival mechanism to prove the party’s capacity for effective governance and therefore justify its continued dominance. But it also has had the effect of somewhat warping Chinese foreign policy to serve domestic interests.

Nowhere is this clearer than in Central Asia, where China’s steadily developing policy toward the region has been focused on securing natural resources. This has further developed recently into a strategy to create a more prosperous neighborhood with which China’s restive westernmost province, Xinjiang, can trade. Far from the center (everything in Xinjiang operates two hours later than Beijing, though the official time is the same as in Beijing), rich in natural resources but largely empty and burdened with minority tensions that periodically spill into violence, Xinjiang long has been a concern to decision makers in Beijing’s governing complex of Zhongnanhai.

These concerns surged anew in July 2009 when rioting in the provincial capital of Urumqi led to more than two hundred deaths. Sparked by protests in the city against reports of Uighur workers in Guangdong Province being abused, the trouble quickly escalated into rioting in which mobs of Uighurs marched around the city beating hapless Han to death. The next day angry Han staged counter-riots directed at the Uighurs as well as at the Han authorities’ inability to protect them or resolve the province’s long-standing problems. Chinese president Hu Jintao quickly departed a G-8 summit in Italy to take charge of the situation.

In the wake of the violence, Beijing decided it was time for a new approach. Senior leaders in Urumqi’s security establishment were fired, and in April 2010 the long-time local party boss Wang Lequan was eased out of his position. Replacing him was Zhang Chunxian, the former governor of Hunan Province, who had received plaudits for his work in bringing economic development to that province. The capstone of this revitalized strategy toward Xinjiang was a May 2010 work conference that produced a number of key decisions related to the province. Richer provinces were given responsibility for parts of Xinjiang; national energy companies exploiting Xinjiang’s rich hydrocarbon wealth were ordered to leave more money in the province in the form of taxes; and “special economic zones” were established in Kashgar (in southern Xinjiang Province) and Khorgos (a land crossing with Kazakhstan). Emphasizing external trade for provincial development, decision makers upgraded the annual Urumqi Foreign Economic Relations and Trade Fair to the far grander China-Eurasia Expo.

But a landlocked province such as Xinjiang can be developed only if its immediate periphery is stable and prosperous enough to trade with it. Bordering Pakistan, Afghanistan, Tajikistan, Kyrgyzstan, Kazakhstan, Russia and Mongolia, Xinjiang is in the middle of a rough neighborhood. This means China has a keen interest in economic and security developments in Central Asia—stretching from the five post-Soviet Central Asian states to Afghanistan.

THIS CONCERN is reflected in a combination of security, economic and cultural efforts China has instituted across the region. Interestingly, these efforts don’t seem to be a product of a complete and considered strategy. But, taken together, they show a picture more comprehensive than is often appreciated. It isn’t clear that even China grasps the incidental impact of its regional activity in reshaping Central Asia or how it is perceived by regional states, as Chinese actors are simply so focused on developing Xinjiang and extracting what they want from Central Asia. With Russia’s influence in the region at a historically low ebb and the widespread perception across Central Asia that the United States will strategically abandon the region once most combat troops have withdrawn from Afghanistan, Beijing has carved out an inadvertent empire. Lacking a clear strategy and attempting to keep a low profile (a characteristic Chinese approach), China has become the most consequential actor in Central Asia.

Hallmarks of this approach are heavy investments in natural resources; infrastructure development; the establishment of Confucius Institutes, nonprofit institutions sponsored by the Chinese government that promote Chinese language and culture; security exercises; and the establishment of a multilateral regional organization. China also is bolstering cross-border traders who are the economic lifeblood of the old Silk Road. Sitting atop it all is the Shanghai Cooperation Organization (SCO), which offers an umbrella for China to demonstrate that its regional activities are undertaken with the acquiescence of neighboring powers.

The driver is economics, seen most clearly in China’s heavy purchasing of large mineral and hydrocarbon sites across the region. In Kazakhstan, the China National Petroleum Corporation (CNPC) has gone into partnership with the local, state-owned enterprise (SOE) KazMunaiGaz to secure 4 percent of China’s oil imports from Kazakhstan. Turkmenistan currently accounts for almost a third of China’s imported natural gas—mostly coming through the speedily built China-Central Asia pipeline, which in 2011 brought some 15.5 billion cubic meters (BCM) of gas to China. CNPC aims to send 24.1 BCM this year and eventually get the flow up to 65 BCM. Further, CNPC secured the rights to develop an oil field in Amu Darya in northern Afghanistan, upriver to a project it already is exploiting in Turkmenistan. According to Kabul analysts, this field, a small one for a company as large as CNPC, is a kind of toe in the water for the Chinese SOE to prepare for future contracts in the hydrocarbon-rich area.

It is not only oil and gas that Chinese firms see in Central Asia. State-owned mining firms Jiangxi Copper and the China Metallurgical Group Corporation (MCC) partnered to invest near $4 billion to exploit the Mes Aynak copper mine southeast of Kabul. And while Chinese firms have been less visible on recent mining tenders in Afghanistan, they doubtless noted the U.S. Geological Survey’s estimate of nearly a trillion dollars worth of minerals in the country. Furthermore, Chinese mining firms have won concessions to mine for gold in Kyrgyzstan and Tajikistan.

But while this natural wealth will help feed China’s insatiable demand for resources, it won’t necessarily help develop Xinjiang. That will require the development of infrastructure across Central Asia. Crippled by aging Soviet infrastructure, the region is a blank canvas for outside developers. China is not the only player around. South Korea has a notable presence in Uzbekistan, while Turkish and French firms dominate the Turkmenistan market. But it is notable to see Chinese firms developing roads leading in and out of Xinjiang. The road from Kashgar to Osh in Kyrgyzstan through the Irkeshtam Pass was built by the China Bridge and Road Company. Chinese workers in distinctive green military greatcoats with shiny buttons could be found earlier this year directing trucks of dirt to complete the road’s final stretches. Other roads can be found in Tajikistan with crews of Chinese repairing parts from Dushanbe toward the Afghan border. Dual-language Russian-Chinese signs mark the workers’ presence. More notable in Tajikistan is the only toll road in the country, going north from Dushanbe to Khujand, built by a Chinese firm and broken up by a shoddily designed Iranian tunnel at the Shahriston Pass. This soon will be replaced by a Chinese-built tunnel. 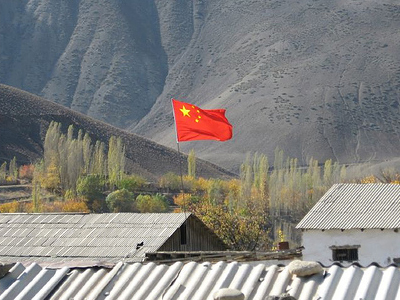