THE U.S. National Intelligence Council forecasts that China will become the world’s largest economy (measured by purchasing-power parity) in 2022. Jane’s predicts that by 2015 People’s Liberation Army (PLA) funding will double to $238 billion, surpassing that of NATO’s eight largest militaries after the United States combined. The International Institute for Strategic Studies says that China’s defense spending might surpass America’s as early as 2025. Even if these projections prove exaggerated, economic, technical and industrial activity of an amazing scope and intensity is already affording China potent military capabilities. This is especially the case when such capabilities are applied—most likely through peacetime deterrence, or a limited skirmish with a neighbor such as Vietnam—to the “near seas” (the Yellow, East China and South China Seas), currently a major Chinese strategic focus.

Allowing Beijing to use force, or even the threat of force, to alter the regional status quo would have a number of pernicious effects. It would undermine the functioning of the most vibrant portion of the global commons—sea and air mediums that all nations rely on for trade and prosperity, but that none own. It would undermine important international norms and encourage the application of force to more of the world’s many persistent disputes. Finally, it would threaten to destabilize a region haunted by history that has prospered during nearly seven decades of U.S. forces helping to preserve peace. No other nation has the capability and lack of territorial claims necessary to play this still-vital role.

A number of strategists appear to believe that America faces the threat of conflict with China in the future, but that it can be avoided through accommodation or prepared for over a protracted period. In fact, a different scenario is more likely: even as the two Pacific powers are sufficiently interdependent to avoid direct hostilities—and share significant interests on which they may cooperate increasingly—China is already beginning to pose its greatest challenge to U.S. influence and interests in the Asia-Pacific.

AMERICAN PSYCHOLOGIST Abraham Maslow’s hierarchy of needs depicts a fundamental reality that is directly applicable to China’s strategic priorities and efforts: basic needs must be fulfilled before higher ambitions can be pursued. From the origins of the Chinese Communist Party (CCP) and its PLA, the party has prioritized its own leadership authority and continuity—deemed essential for China’s physical integrity, stability and modernization—above all else. Before 1949, the CCP devoted itself to achieving political control over a Chinese state; no particular geographic element could trump that prerequisite.

To ensure its continued authority, the CCP relies on an extensive, elite party-state structure. The CCP boasts eighty million members, roughly equivalent to Germany’s population. Consider the task the Organization Department faces simply in maintaining its dossiers and presiding over its assignment. This governmental structure extends first over China’s core homeland territory, which for centuries has been dominated by an overwhelming Han majority. Chinese bureaucratic governance of this area in some form or another is perhaps unmatched by any other civilization in its duration and cultural assimilative capacity; any modern Chinese government must preserve stability here to maintain both national functions and its own ethnocultural and political legitimacy. At the country’s outer limits are borderlands with significant racial, linguistic and religious minorities. Vast in area, rich in resources and traditionally associated with imperial China under various arrangements sometimes more nebulous and contested than is the case today, these areas are integral parts of the Chinese state but their history can generate instability. Ensuring Beijing’s control therein has entailed the expenditure of significant resources since 1949, initially in the form of “sticks”—military, paramilitary and domestic-security activities—and more recently supplemented with major “carrots” of economic development and preferential policies. While exact figures remain elusive, and metrics are fiercely contested by foreign analysts, it is widely reported that China’s domestic-security budget today exceeds its military budget.

During the Cold War, China’s land borders were hotly contested, and Beijing suffered disputes with nearly all of its fourteen continental neighbors. It has since reached settlements with all but two: India and Bhutan. Such settlements included major concessions on Beijing’s part, particularly with Russia. Here China acted because of imperial treaty obligations, and because its leaders judged that an environment conducive to national development necessitated stable relations with its vast land neighbor. Indeed, pacifying the vast majority of its land borders offers China the prospect of becoming the first great continental state since the Persian and Roman Empires to make a successful transition from land power to sea power—though the most realistic outcome is for China to become a continental-maritime hybrid.

Rather than its land borders, it is China’s immediate maritime periphery that is most contested today. The issue of cross-Strait relations aside, China has not reached comprehensive agreements with any of its eight maritime neighbors. The near seas contain the vast majority of China’s outstanding claims, all of its island and maritime disputes, and significant resources that Chinese strategists believe can replace depleting continental reserves. These are of paramount importance to a China that feels acutely wronged by history, has largely addressed its more basic security needs and craves further development. Beijing is therefore focusing its latest military capabilities on the near seas and their immediate approaches. The PLA faces enduring weaknesses in real-time coordination and data fusion, but fiber optics, high-powered line-of-sight communications, missiles and sea mines offer workarounds for operations in the near seas.

Beyond the near seas, it remains much harder for China to fight major militaries. The further from China one looks, the fewer forces it can deploy and support, the less capable they are, and—in a worst-case scenario—the more susceptible they are to disruption and destruction. Beijing lacks the robust network of overseas allies, bases, logistics and defenses that America has developed over decades to mitigate such problems. Reducing this disparity even incrementally would require spending, time and policy changes on a scale that Beijing may well prove unwilling or unable to muster.

To understand China’s military development clearly, then, it is necessary to view it through the lens of distance.China’s ability to deploy military force and project power resembles gradually dissipating waves. Close to home, they are cresting dramatically, threatening to overtop nearby seawalls. Yet virtually the only waves China is making far away are the wakes of its ships protecting merchant vessels from pirates in the Gulf of Aden and engaging in diplomacy beyond.

CHINA IS ACHIEVING rapid but uneven military development. Its capabilities are divided among PLA services limited in real-time coordination ability. To further its near-seas interests, China is attempting to undermine the efficacy of, and decrease the likelihood of involvement by, U.S., allied and friendly military forces there. By developing abilities to hold foreign military platforms at risk, Beijing hopes to deter them from intervening in areas of sensitivity to China in the first place, and to persuade Taipei, Tokyo, Manila, Hanoi and other regional actors that Washington’s assistance will be neither reliable nor forthcoming. The PLA thus systematically targets limitations in foreign military platforms stemming from laws of physics: for example, the fact that missile attack tends to be easier and cheaper than missile defense. China is on the verge of achieving major breakthroughs in multiaxis cruise-missile strikes, antiship ballistic missiles (ASBM), antisatellite weapons and navigation satellites. Such achievements, coupled with determination to address near-seas disputes, promise to enhance China’s “keep out” capabilities and undermine regional stability.

China’s DF-21D ASBM has reached initial operational capability and has already been deployed in small numbers. While it is only one of manifold advanced weapons systems that China has developed and deployed, the ASBM is illustrative of Beijing’s ability to utilize its defense industrial base to develop a novel major system to respond to an emergent strategic need—a capability that only a handful of nations possess. China’s ASBM development is an example of “architectural innovation” (linking existing design concepts in new ways), which is potentially disruptive and unpredictable. The ASBM stands out from this already-potent antiaccess/area-denial effort because it draws on over half a century of Chinese experience with ballistic missiles. It may be fired from mobile, highly concealable platforms, and it has the range to strike targets hundreds of kilometers from China’s shores. It also exemplifies the vulnerabilities and risks inherent in Beijing’s current approach.

For all their disruptive aspects, however, China’s ASBMs and associated systems did not emerge from a vacuum. For over three decades, Chinese leaders and strategists have been thinking of using land-based missiles to hit threatening targets at sea. Beginning in the late 1970s, Chinese experts scrutinized America’s Pershing IItheater ballistic missile, and appear to have incorporated, or at least emulated, some of its key technologies. China’s space program has furthered relevant capabilities. And China’s Second Artillery Force, which assumed conventional missions for the first time in 1993, has capitalized on leadership support for missile development and controls land-based ballistic missiles, including the ASBM.

China’s ASBM development dates at least to the 1995–1996 Taiwan Strait crisis, which underscored Chinese feelings of helplessness against U.S. naval power. But it was perhaps the physical destruction and damage to sovereignty caused by the United States’ accidental bombing of Beijing’s embassy in Belgrade in May 1999 that most strongly catalyzed China’s efforts to develop the ASBM and other “keep out” weapons systems, along with the supporting command, control, communications, computers, intelligence, surveillance and reconnaissance (C4ISR) infrastructure. The bombing reinforced the visionary thinking of China’s paramount leader of the time, Jiang Zemin, concerning the future of warfare and prompted other leaders’ support. Accordingly, that same month China began funding megaprojects for the development of “assassin’s mace” weapons, systems that promised disproportionate effectiveness vis-à-vis a top military power such as the United States despite China’s overall technological inferiority. 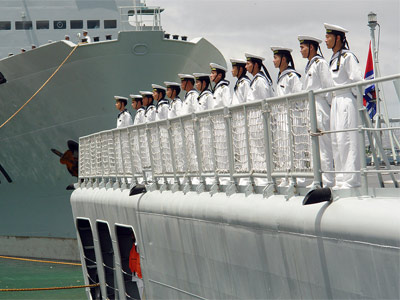