In Defense of Kissinger IN HIS BOOK Diplomacy, Henry Kissinger concludes that the United States “faces the challenge of reaching its goals in stages, each of which is an amalgam of American values and geopolitical necessities.”1 The recent debates about U.S. military options in Libya and Syria reflect the enduring tension between these intertwined, at times competing components of our external relations. No U.S. statesman can ignore this dilemma, and none will find it easy to strike exactly the right balance between the two, especially in times of crisis. All would seek to simultaneously pursue the promotion of the national interest and the protection of human rights. Kissinger, famous for advocating an American foreign policy based on the national interest, has long stressed that values and power are properly understood as mutually supporting. As he argued in a 1973 speech, since “Americans have always held the view that America stood for something above and beyond its material achievements,” a “purely pragmatic policy” would confuse allies and eventually forfeit domestic support. Yet “when policy becomes excessively moralistic it may turn quixotic or dangerous,” giving way to “ineffectual posturing or adventuristic crusades.”2 The key to a sustainable foreign policy, in his view, is the avoidance of either extreme: “A country that demands moral perfection of itself as a test of its foreign policy will achieve neither perfection nor security.”3

This ever-present fusion of American values and national interests was evident in the spring of 1971, as a crisis erupted in South Asia during Kissinger’s tenure as Richard Nixon’s national-security adviser. When the British Raj ended in 1947, a partition of the subcontinent led to the creation of India and Pakistan as separate, estranged sovereign states. Pakistan, envisioned as a homeland for South Asian Muslims, emerged with an unusual bifurcated structure comprising two noncontiguous majority-Muslim areas: “West Pakistan” and “East Pakistan.” While united by a shared faith, they were divided by language, ethnicity and one thousand miles of Indian territory.

Over the course of a fraught sequence of events from 1970 to 1972, a party advocating East Pakistani autonomy won a national parliamentary majority, and Pakistan’s two wings split. Amid natural disaster (a cyclone of historic proportions struck the East on the eve of the vote, killing up to half a million people and devastating fields and livestock), constitutional crisis, a sweeping crackdown by West Pakistani forces attempting to hold the East, mass refugee migrations, guerilla conflict and an Indian-Pakistani war, East Pakistan achieved independence as the new state of Bangladesh. By most estimates, the victims of the Bangladeshi independence struggle, which included communal massacres unleashed during the crackdown, numbered in the hundreds of thousands.

In his new book, The Blood Telegram: Nixon, Kissinger, and a Forgotten Genocide, Princeton professor Gary Bass, who has written previous books on humanitarian intervention and war-crimes tribunals, portrays the American president and his national-security adviser as the heartless villains of these events. While Bass makes a cursory acknowledgement of the two men’s geopolitical accomplishments, he derides the thinking that informed their actions as the product of a “familiar Cold War chessboard.” His own implicit framework is a deeply heartfelt and contrary view to Kissinger’s, one that places human-rights concerns at the pinnacle of U.S. foreign policy, at least in this crisis.

But how persuasive is Bass’s history? Instead of producing a definitive account, he offers an ahistorical and tendentious rendition that, more often than not, lacks a broader context. He reduces a complex series of overlapping South Asian upheavals, Cold War alliances and diplomatic initiatives to “a reminder of what the world can easily look like without any concern for the pain of distant strangers.”4 He faults the United States for not taking a firmer, more public stand on Pakistan’s domestic repression while offering only vague assurances that this U.S. pressure would have brought about an actual improvement in conditions. Moreover, he trivializes the possibility that his human rights–dominated policy preferences could have had profoundly damaging strategic consequences for the United States. Ironically, in his previous book Freedom’s Battle, Bass sympathizes with precisely the sort of cautionary impulses that animated Kissinger:

Even if a president or prime minister has credible information about atrocities . . . there must still be a cold realpolitik calculation about the costs of intervening. . . . If a humanitarian intervention would lead to a broader international crisis, or plunge the country—or the world—into a massive war, then most cabinets will decide that it is just not worth it. . . . Believing in human rights does not make one suicidal.

In fact, he goes even further, allowing that the “point of a balance of power”—Kissinger’s principal preoccupation in 1971, as throughout his career as a statesman—“is a profound moral goal: it keeps the peace.”5 But in The Blood Telegram, he implies that Nixon and Kissinger should have realized that they could have had it both ways with no risk—achieved their strategic breakthrough with China, with all of its attendant geopolitical benefits, and concurrently put human rights in East Pakistan at the top of their policy agenda. If only life were that simple: as Kissinger observes, “The analyst runs no risk. If his conclusions prove wrong, he can write another treatise. The statesman is permitted only one guess; his mistakes are irretrievable.”6

Thus, at a time of acute crisis, Kissinger judged that if Washington had mounted an all-out private and public human-rights campaign against then president Agha Mohammad Yahya Khan and the Pakistan government, which was correctly convinced that the future of the state was at stake, such a campaign would not have fundamentally altered Islamabad’s policy toward East Pakistan, and the White House’s China initiative could well have collapsed. However, as will be demonstrated at length later in this essay, that hardly meant that he ignored the plight of the Bengali Hindus. Kissinger, both while in office and in his subsequent writings, rejected the proposition that circumstances inevitably force a crude either/or choice between national interests and democratic values, and during this crisis no other nation except India did as much as the United States to directly address the human-rights tragedy in East Pakistan.

One wishes that the chasm between academic and policy-maker perspectives might have produced a certain modesty in Bass’s treatment of these events. Unfortunately, it doesn’t. Instead The Blood Telegram offers a strident, almost willfully biased attack on the personal motives of policy makers whom Bass condemns—from the comfortable perspective of forty years of hindsight and an American victory in the Cold War—for falling short of bringing about all desirable goals simultaneously. In Bass’s theory, Nixon and Kissinger, motivated by a mixture of “racial animus toward Indians,” indifference to human rights and an obsessive focus on Cold War geopolitics, ignored opportunities to save lives, ensured that “the United States was allied with the killers” and incurred “responsibility for a significant complicity in the slaughter of the Bengalis.”7 To reach his indictment of Nixon and Kissinger, Bass pairs a myopic account of the Nixon-Kissinger opening to China and its long-term objectives with a highly selective rendition of U.S. policy toward the breakup of Pakistan.

IT IS IMPORTANT to stress what Nixon and Kissinger were trying to accomplish in U.S.-Chinese relations beginning in the fall of 1970: no less than a fundamental restructuring of the global balance of power and world order in America’s favor. By establishing a strategic understanding with Beijing based on China’s genuine worry that the relentless Soviet military buildup in the Far East could presage an attack on China, they hoped to strengthen America’s global position; meet Beijing’s test that “only an America that was strong in Asia could be taken seriously by the Chinese”8; incentivize Moscow to adopt more reasonable policies toward the United States, including in Europe and on arms control; bring an honorable end to the Vietnam War (a conflict in which half a million Americans were at war at the time of Nixon’s inauguration, but which public and elite opinion increasingly rejected); and reduce tensions throughout Asia. All these crucial objectives—in which success could fairly count as both a strategic and a moral achievement—required a fundamental reorientation of U.S.-Chinese relations. As Kissinger observes in White House Years, “The hostility between China and the Soviet Union served our purposes best if we maintained closer relations with each side than they did with each other. The rest could be left to the dynamic of events.”9

Nixon and Kissinger’s decision in October 1970 (before the Pakistani crisis) to reach out to China through the Pakistanis is casually dismissed by Bass as “one of many options” and potentially the worst. He suggests France and, curiously, totalitarian Romania as plausible and more ethical alternatives.10 Yet the United States explored all three, and Beijing unambiguously chose Pakistan. The first explicit indication by China that a personal envoy of Nixon would be welcome in Beijing came in December 1970 by way of the Pakistani channel, with Chinese premier Zhou Enlai stressing, “The United States knows that Pakistan is a great friend of China and therefore we attach importance to the message.”11 On April 27, 1971, after American replies through both Romania and Pakistan, Beijing followed up through Islamabad and invited “direct discussions between high-level responsible persons of the two countries,” suggesting that the proper arrangements could “be made through the good offices of President Yahya Khan.”12 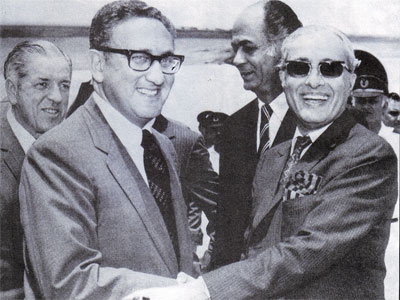