BARACK OBAMA encountered an unprecedented welcome when he visited Israel in March. He was greeted at the airport not just by the usual dignitaries but also by a hot new weapon—Israel’s Iron Dome missile-defense system against short-range rockets. A battery was stationed only a few footsteps from Air Force One, so the president could walk over and congratulate his hosts on their successful use of the antimissile weapon during Israel’s Operation Pillar of Defense in November 2012.

The Israel Defense Forces (IDF) launched Operation Pillar of Defense on November 14 in response to increasing rocket attacks from the Gaza Strip as well as other actions by militant Palestinians. The seven-day operation involved Israeli air strikes against Hamas targets in Gaza, but there was no ground invasion such as the one launched in 2008–2009, called Operation Cast Lead. The IDF had four Iron Dome batteries in operation prior to Pillar of Defense and deployed a more advanced fifth battery during the operation. According to the IDF, the system, developed by Israel with joint U.S. and Israeli funding over the past decade or so, provided a sense of security to many Israelis by preventing injury, loss of life and property damage. Reports indicate that some Israelis even ignored air-raid sirens, remaining exposed in the hopes of photographing an Iron Dome interception.

Iron Dome’s scorecard will need closer scrutiny as more technical and verified evidence becomes available, but there is ample justification for praise and expectations of continued operational success. According to the IDF, some 1,500 rockets were fired on Israel during the course of Operation Pillar of Defense. Reports indicate about a third of these rockets (five hundred or so) targeted population centers; of those, 84 percent (over four hundred) were successfully intercepted by Iron Dome (though some technical experts have suggested that the actual success rate was probably significantly lower). Whatever the actual number of intercepts, enthusiasts in both the United States and Israel have viewed this as a breakthrough in the long-debated issue of missile defense. Some have argued that Iron Dome shows the way toward achieving Ronald Reagan’s transformative 1980s vision of strategic defense, a world where ballistic missiles are “impotent and obsolete.”

Moreover, American experts and political leaders have argued for years that a new, global missile age is emerging, in which a widening array of more numerous and capable short-range rockets, cruise missiles, and intermediate- and long-range ballistic missiles will pose stark challenges for even the most advanced militaries. Israel faces ongoing attacks from relatively unsophisticated and inaccurate rockets today; tomorrow it may face Syrian Scuds (currently being used against rebel groups within the country) or a range of Iranian ballistic missiles. Armed conventionally or not, China, Pakistan, North Korea and, more discreetly, a few other states are developing missiles and marketing them internationally. Despite multilateral efforts to control the spread of missiles—including the Missile Technology Control Regime, the Proliferation Security Initiative and the Hague Code of Conduct against Ballistic Missile Proliferation—few expect this Pandora’s box to be shut.

Iron Dome is certainly one response to this new missile age, but much of the recent commentary on the subject overestimates the importance of recent Israeli successes. Iron Dome does represent a significant new capability that may have a positive effect on regional-security dynamics in the Middle East and perhaps beyond. Such quick-response programs developed in the United States and elsewhere can contribute to the defense of key population centers and critical infrastructure against limited attacks, and that in turn can bolster psychological resilience. Furthermore, the U.S.-Israeli effort may pave the way for greater missile-defense collaboration among like-minded nations facing similar threats.

But many thorny strategic and operational issues remain. Despite its utility in meeting Israel’s unique security challenges, Iron Dome is not a game changer, nor does it validate—at least not yet—Reagan’s vision of a global strategic-defense capability. Despite a growing (but incomplete) consensus on the need for some level of missile defense, the vision of “impotent and obsolete” ballistic missiles remains firmly out of reach for the foreseeable future.

Whatever its ultimate strategic significance, the Iron Dome technology has served to reinvigorate the American debate on the utility of missile defense. Until recently, the relatively quiet and scholarly tone surrounding U.S. missile policy has contrasted sharply with the public cries and critiques that characterized what we have labeled the “three waves” of emotional debate regarding missile defense over the past four decades. These include the debates in the 1960s over deployment of what became the limited Safeguard system; Reagan’s space-based concept of the 1980s; and George W. Bush’s plan for a ground-based system purportedly designed to protect the United States and parts of Europe from an Iranian attack. Ever since the Obama administration’s introduction of the European Phased Adaptive Approach (EPAA) in 2009, there have been at most ritual acknowledgements of the “requirement” for missile defense—as in the 2010 New Strategic Arms Reduction Treaty preamble and elsewhere. Further, in the United States and elsewhere there has been only relatively low-level expert debate, even in the face of a National Academy of Sciences report that posited significant problems with current programs.

This essay will assess Iron Dome’s potential impact on U.S. and international efforts to deploy multitiered national, regional and global missile-defense systems. We will look at the antimissile system’s history and construct a preliminary baseline evaluation of its performance last fall. Finally, we will consider the strategic implications of Iron Dome and how it or similar systems might contribute to U.S. and Israeli missile-defense efforts.

ISRAELI EFFORTS to develop a missile shield go back three decades and are intertwined with the Jewish state’s close collaboration with the United States. The two countries signed a memorandum of understanding in 1986 to develop missile defense and to facilitate Israeli participation in Reagan’s Strategic Defense Initiative (SDI). Missile defense became even more salient for Israeli leaders after Iraq fired conventionally armed Scud missiles at Israel during the Gulf War of 1991. In that episode, hastily deployed Patriot missiles helped limit civilian terror and, while their operational effects were significantly oversold in the initial reports, may have thwarted some Scuds as well. Since then, Israel and the United States have cooperated on several missile-defense programs, including joint technology development, industrial cooperation, and a program of testing and exercises in addition to shared funding, which continues to this day. Further, a sophisticated U.S. radar system in the Negev desert presently represents the only permanent U.S. ground presence in Israel.

Israel’s current missile-defense goal is to construct a layered defense against ballistic missiles, cruise missiles, rockets and other air threats. Hostile or potentially hostile states surrounding Israel have emphasized rockets and missiles in their force planning over traditional war-fighting platforms and capabilities. The air forces of hostile neighbors in particular are in many cases increasingly obsolete, due in part to Western technology-denial efforts. In both the 2006 and 2008–2009 conflicts, Israel’s enemies attempted to rain rockets on Israel, forcing the IDF to initiate complicated, costly and politically problematic ground operations. Israel’s aim was to destroy missiles and launchers used against the country and to take out safe havens available for enemy missile operations.

Far more than the United States, Israel sees its adversaries’ air and missile capabilities (including conventionally armed ballistic missiles) as part of a continuous spectrum of threats to its population and forces. The basic Israeli concept is to deploy active and passive defenses as well as offensive capabilities against known and perceived threats, as was recently seen when Israel attacked targets in Syria to prevent the transfer of Iranian Fateh-110 missiles to Hezbollah. Moreover, some analysts believe that Israeli intelligence agencies will undertake phase-zero (i.e., precombat) operations against rocket and missile manufacturers, their potential launch sites and associated personnel. Active defense, as understood in Israel, involves a multitiered matrix of systems that to date are in a variety of stages of development, deployment and readiness.

Iron Dome, representing the lowest-tier system, is intended to intercept relatively unsophisticated rockets. It was designed by Rafael Advanced Defense Systems Ltd., a private Israeli defense firm with very close ties to the IDF that builds high-tech defense systems for air, land, sea and space. It uses the explosive-tipped Tamir interceptor to destroy rockets at a range of four to seventy kilometers. Iron Dome relies on a widely publicized capability to almost instantly discriminate between rockets targeted against populated areas and those that will drop in uninhabited areas; thus, it seeks to intercept only the threatening rockets. According to Israeli missile expert Uzi Rubin, former head of the Israel Missile Defense Organization, this ability to discriminate contributed to an estimated exchange ratio of one interceptor fired for every three rockets fired at Israel during Operation Pillar of Defense. But perhaps its greatest technological success is its ability to detect, track, aim and explode ordinance in a very limited time window, which is particularly difficult within the short distances that characterize Israeli combat space.

An Iron Dome battery includes an ELM-2084 S-Band phased-array radar, fire-control center and typically three launchers capable of carrying twenty Tamir interceptors. The Tamir is three meters long and uses a proximity-fused explosive warhead to destroy rockets in midair. Israeli media have reported that shrapnel resulting from Iron Dome has damaged property, but there has been no in-depth public analysis of the danger posed to civilians by interception-generated shrapnel. Each battery costs approximately $50 million, while interceptors cost approximately $50,000 each. Statements from Israeli officials indicate that Israel may need up to thirteen batteries to provide full coverage to threatened areas. 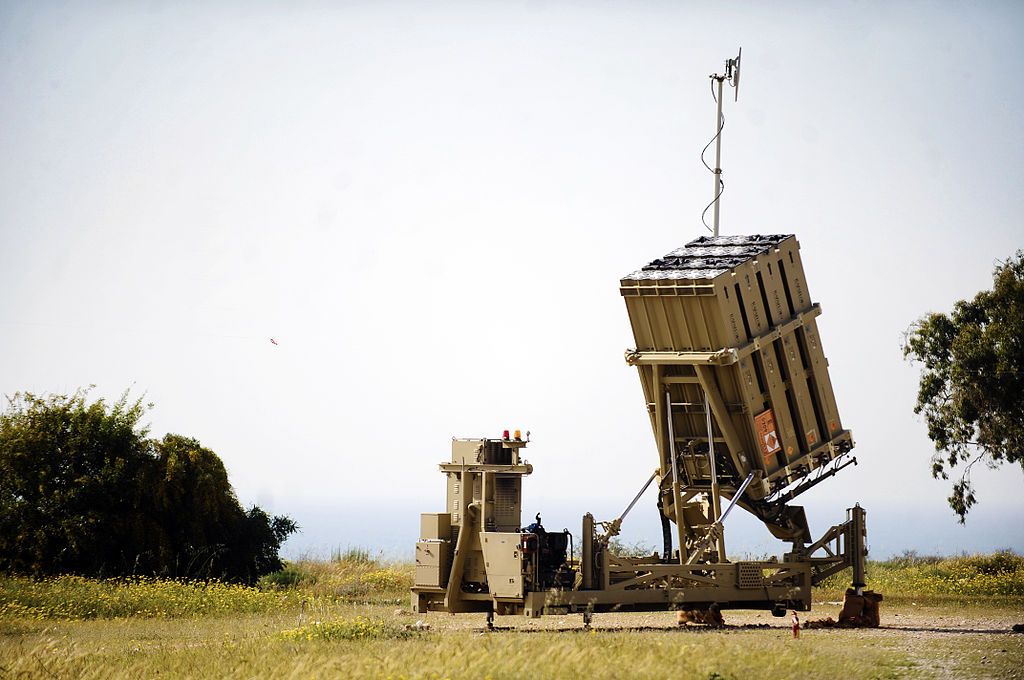