FIFTY YEARS ago, drawn to the perceived dynamism of fresh, young military leaders, scholars and policy analysts became enamored of the potential role of the military in political, economic and social modernization. The “man on horseback,” as S. E. Finer described it, was seen as best positioned to effect the transition from developing to modern societies. The military, it was believed, could draw on the institutional cohesion and its monopoly of coercive power to marshal the resources and will necessary to push societies forward. Egypt was studied as a prime example.

Things did not quite turn out as the academics expected. After overthrowing the monarchy and seizing power in 1952, the so-called Free Officers in Egypt constricted the political space and monopolized power, driving Islamists underground and marginalizing old-time liberal political elements. Their sweeping modernization programs nearly bankrupted Egypt. Ultimately, the monopoly of power achieved by Egypt’s revolutionists, led by Gamal Abdel Nasser, primarily was used to maintain the military’s dominant position and ensure that its interests were protected and advanced.

To be sure, Nasser had grand—indeed, grandiose—dreams to revamp Egyptian society. In the name of agricultural reform, he broke up large landholdings and parceled out land to Egypt’s fellahin, or peasants. Though a socially progressive move, this initiative undercut agricultural economies of scale and helped transform Egypt into a major importer of wheat and other basic foodstuffs. In the name of reversing the evils of capitalism, the government became the initiator and owner of large-scale manufacturing enterprises, which ensured mass employment but also drained the national budget as huge losses ensued. Nationalized financial entities experienced a similar fate. In the name of promoting pan-Arab secular nationalism, Nasser threatened conservative Arab neighbors, ultimately involving Egypt in a messy civil war in Yemen that severely weakened Egypt’s military capabilities in the years before the 1967 war with Israel. By the late 1970s, a decade after Nasser’s death and more than twenty-five years into the Egyptian revolution, the best that could be said about the military-dominated Egypt was that national pride had been restored and all Egyptians suffered equally.

IN MANY respects, the next forty years under Anwar Sadat and Hosni Mubarak represented an effort to correct some of the missteps that occurred after the 1952 revolution. Sadat scaled down the rhetoric against Arab monarchies; switched Cold War allegiances from the Soviet Union to the United States; made war and then peace with Israel; tried to open the economy to private-sector activity; and experimented with a government-led multiparty system. Despite all these initiatives designed to correct the course of the Egyptian revolution, Sadat’s crackdown on the Muslim Brotherhood and other opposition elements ultimately led to his assassination at the hands of Islamist radicals within the military.

Mubarak solidified the peace treaty with Israel, but he did so at the cost of ending Egypt’s leadership role in the long-standing Arab confrontation with Israel. Mubarak also moved Egypt decisively into the arms of the United States. He used the $1.3 billion in annual U.S. military assistance to rebuild the Egyptian armed forces, tying Egypt to American arms, doctrine and training. He used the $800 million of annual U.S. economic assistance to reconstruct the country’s failed infrastructure. Indeed, when Mubarak became president in 1981, water, wastewater, electricity and telecommunications capabilities were in crisis. Within twenty years, all of this critical infrastructure had been rebuilt and modernized. And Mubarak also oversaw a dramatic opening of the economy, shepherding the system through a tough but successful IMF-directed macroeconomic reform program in the 1990s and then appointing a reform cabinet ten years ago with a mandate to expand the private sector.

Despite this impressive record of change and adaptation, Mubarak failed to undo the three most egregious mistakes of the Nasserist past. First, continuing the military’s long-standing antipathy toward and distrust of the Muslim Brotherhood, Mubarak kept in place emergency laws that defined the authoritarian character of the political system. While a semblance of free speech was tolerated—provided such speech did not touch the presidential family—politics were stifled. Political parties and the parliament were a joke, and civil society became an arm of the state rather than an outlet for expression and volunteerism. By the mid-2000s, significant political ferment was evident, catalyzed by rigged elections, heavy-handed police crackdowns and, perhaps most strikingly, the possibility of the hereditary succession of Mubarak’s son Gamal to the presidency.

Second, Mubarak failed to address social problems generated by unequally distributed economic growth. Privatizations turned the well connected into massively wealthy individuals whose conspicuous consumption knew no limits. Luxury cars filled the streets of Cairo, and Egypt’s Red Sea and Mediterranean coastlines were overbuilt with luxury, gated compounds of massive houses and pools. Meanwhile, a large portion of Egyptians still suffered from hunger, poverty and unemployment. If a mantra of the Nasser years was “at least we all suffered equally,” Mubarak turned the gap between rich and poor into a very wide chasm.

Third, Mubarak allowed, and probably encouraged, the military to take on the character of a parastatal business conglomerate that enriched the officer corps while, paradoxically, leading to a significant decline in military professionalism. In addition to running a large number of military industries, the military produced civilian consumer goods and established agriculture and infrastructure businesses. Remarkably, the extent of the military’s presence in the economy is unknown—its businesses are reported to be worth anywhere from 10 to 30 percent of Egypt’s GDP—because the military is exempt from public reporting and oversight.

THE 2011 Tahrir uprising initially constituted a rebellion against the first two of Mubarak’s failings—that is, the persistence of authoritarian rule and the growing economic inequalities. Authoritarianism had taken a toll even on the storied Egyptian patience, and masses of people proved ready to stay in the streets in the face of a possible regime crackdown. But the targets were Mubarak, his hated interior minister, Habib el-Adly, and senior aides. The military was not singled out. The Tahrir crowds also seethed at the perceived corruption of Mubarak personally and the business community. Many businessmen fled immediately, following the money they had sent offshore over the years. Those too slow to realize the extent of the animosity against them were jailed, tried and convicted, usually in the space of just a few weeks. The perceived corrupt ministers and businessmen were the targets—again, not the military.

Only in recent months has the revolution turned its focus to the military itself, in large part because of the clumsiness, heavy-handedness and tone deafness of the senior military officers who constituted themselves as the Supreme Council of the Armed Forces (SCAF), effectively the rulers of Egypt since Mubarak’s ouster. At Tahrir, the military astutely positioned itself as the champion of the revolution—refusing to move against the demonstrators and forcing Mubarak first to appoint a vice president, then to forego another term and finally to leave office. But after more than a year of exercising direct political power, the military has revealed its self-centered interests—preserving its corporate role as the praetorian guard of the political system and ensuring that its economic prerogatives remain unchallenged.

As the Egyptian military sees it, the SCAF has exerted considerable effort to adapt itself to a volatile and uncertain period of political instability while maintaining three self-defining critical elements: its embodiment of the 1952 revolution and the essential character of the state and its institutions; its exclusive role in determining national-security threats and the responses of the state; and its economic equities and interests, including exclusive control over the military budget. As a new civilian political leadership assumes power, led by President Mohamed Morsi and underpinned by an Islamist-majority parliament, the central question is whether Islamists and the military will engage in a winner-take-all battle for control of Egypt. That may prove to be the only pathway to a more transparent and inclusive democracy.

UNTIL THE 2011 Tahrir uprising, the extent of the Egyptian military’s praetorian role had diminished gradually since the founding of the modern republic in 1952. Initially, the military, as the champion of the new regime, played a dominant role in the daily governance of the country. But as the military gradually professionalized and expanded its role into the civilian economy, its direct role in the political space diminished. This is not to say it was not powerful; it remained one of the preeminent institutions in Egypt, along with the office of the president. But the military’s influence shifted horizontally with its economic activities and high conscription rates, as opposed to the top-down control exercised by the executive branch.

All of Egypt’s past presidents—Naguib, Nasser, Sadat and Mubarak—were former military officers, and they relied on this military legacy to bolster their legitimacy. At the same time, the extent of the military’s role in daily governance was defined vis-à-vis the sitting president, the only position in Egypt to which that military was truly accountable. Therefore, the different circumstances and leadership styles of the Nasser, Sadat and Mubarak presidencies directly influenced the historical progression of the Egyptian military toward a semiprofessionalized force with unique profit-seeking economic motives. 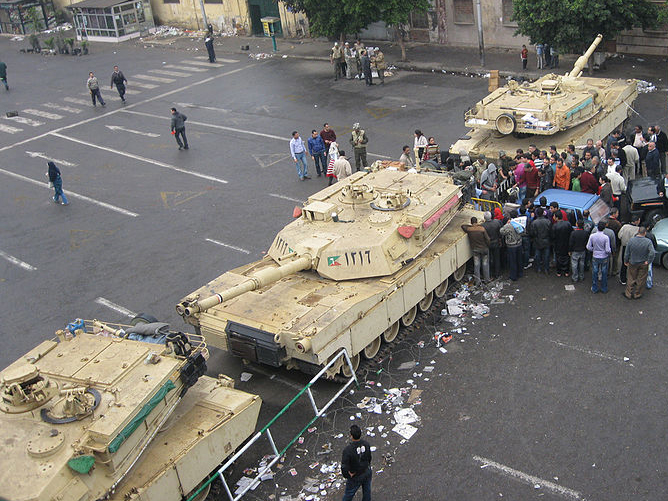 Pullquote: All of Egypt’s past presidents—Naguib, Nasser, Sadat and Mubarak—were former military officers, and they relied on this military legacy to bolster their legitimacy.Essay Types: Essay