THIS NOVEMBER 10, at precisely 9:05 a.m., for the seventy-fifth time in the history of the Turkish Republic, the nation will grind to a halt. In Istanbul, for sixty seconds sirens will drone, ferryboat horns will blare in the Golden Horn and traffic will freeze. Throughout the country, millions of ordinary Turks will stand still and mute to mark the death anniversary of their nation’s founding father. It is an impressive moment, and deservedly so. Mustafa Kemal, known to history as Kemal Ataturk (“Father of the Turks”), was an indomitable blend of soldier, diplomat, politician, intellectual and nation builder. One of the twentieth century’s most remarkable leaders, he was a man of iron will and incredible vision.

A war hero even as the Ottoman Empire he served crumbled around him, Ataturk was instrumental in defeating an invading British army at Gallipoli. At the end of World War I, when the victorious Allies occupied Istanbul and began to partition Ottoman territory, he took to the Anatolian heartland, forged a new citizen army, routed Greek forces that had seized Smyrna (now Izmir) and much adjoining Turkish territory, and then drove the Allied occupation forces out of Istanbul. But that was only the beginning. As president of his own newly minted, custom-designed Turkish Republic, with inspired eloquence and brute force, he dragged his fellow countrymen, many of them literally kicking and screaming, into the twentieth century. The Turkish language was modernized and systematized. The Latin alphabet replaced an archaic Arabic script. Massive industrial, education and infrastructure initiatives were launched and a new sense of Turkish identity—part authentic, part invented in rewritten history textbooks—replaced the old Ottoman way of thinking. In most respects, this was a great plus for the vast majority of poor urban and rural Turks. Under the Ottoman Empire, even in the glory days when it ruled large chunks of Europe, Asia and Africa, and was mistress of the Mediterranean, most ordinary Turks were part of the impoverished peasant masses. Commerce, finance and other professions were monopolized by a small, educated elite, many—in some cases, most—of them non-Muslim Greeks, Armenians and Jews.

The end of the empire changed all that. At times it was not a pretty picture; transforming the truncated remains of the multiethnic Ottoman Empire into a cohesive, racially rooted nation-state was achieved at great human cost and more than a little tampering with historical truth. While Ataturk had condemned the extermination of Armenians during World War I by his Young Turk predecessors, calling it a “shameful act,” he presided over a brutal but less horrific forced mass transfer of populations in which Anatolian Greeks—who, like the Armenians, had lived there for centuries before the arrival of the first nomadic Turkic invaders—were driven from their homes. The same fate, it is worth noting, awaited a smaller number of ethnic Turks living in Greek territory.

The only substantial minority that remained in modern Turkey were the Kurds, fellow Muslims but with their own language and customs, who are still a source of considerable friction today. Even they were subjected to a clumsy attempt at what might be called bureaucratic assimilation. The republic invented a new name for them: until a few years ago, they were officially classified as “mountain Turks,” denied a legitimate identity of their own.

A charismatic speaker and popular hero, Ataturk stumped the republic, defining a new sense of “Turkishness” and denouncing anything and everything he considered divisive or reactionary—from fez and veil to traditional Ottoman music and religious orders. Like Peter the Great in Russia two centuries before, he was determined to overcome centuries of backwardness and decline, by brute force if necessary—and it often was. Also like Peter the Great, he had seen the greater world outside his homeland, and he liked what he saw. Once firmly in power in the mid-1920s, he would declare:

I have no religion, and at times I wish all religions at the bottom of the sea. He is a weak ruler who needs religion to uphold his government; it is as if he would catch his people in a trap. My people are going to learn the principles of democracy, the dictates of truth and the teachings of science. Superstition must go.

Only it didn’t. Today, many informed observers feel that Ataturk’s achievement is at risk, threatened by a rising Islamist tide led by Prime Minister Recep Tayyip Erdogan, an unashamed—and historically uninformed—admirer of an idealized version of the Ottoman-Islamic past that exists mainly in his own imagination. It is both significant and ironic that the mass anti-Erdogan protests that swept Turkey this June were initially triggered by his arbitrary decision to destroy Gezi Park, one of Istanbul’s few remaining green areas, to replace it with a “replica” of Ottoman-era military barracks and a shopping mall. Other plans included building an enormous new mosque in adjoining Taksim Square, site of the Monument of the Republic.

Why this nostalgia for a romanticized, not to say imaginary, Ottoman-Islamic past? Perhaps it begins with a deep sense of grievance on the part of Turkish Islamists, shared by their brethren throughout the Middle East—the belief that a golden age of Islamic dominance was destroyed by the forces of Western Christianity and Western technology. Whatever is driving this nostalgia for a romanticized past of Islamic vibrancy and power, it has become a compelling force in modern Turkish politics. The late Samuel P. Huntington of Harvard, a leading political scientist of our time, called Turkey a “torn country”—a nation belonging culturally to a particular civilization but whose leaders wish to redefine it as belonging to another. Hence, any effort to understand the dynamics of Turkish politics today must begin by probing the rise to power and remarkable national stewardship of Kemal Ataturk, as well as the leadership vacuum that ensued upon his death.

HE WAS one of many bright, young Ottoman officers of his generation who had been posted as military attachés in Europe before World War I. These young men often came home dazzled by Western society and technology, with a newfound contempt for traditional Ottoman culture and religion and with an indiscriminate zeal for all things Western and modern. At the dawn of the twentieth century, this often meant embracing fashionably “enlightened” free thinking, anticlericalism, and the rather naive belief that science and rational materialism could solve all of society’s ills if only the right people (i.e., themselves) could take charge from their elders.

In 1908, they did, pressuring the reactionary Sultan Abdul Hamid II to hold parliamentary elections and embrace constitutional government. When he tried to renege a year later, Young Turk officers and their troops deposed him, replacing him with Sultan Mehmed V, an elderly nonentity who served as a ceremonial figurehead. But rather than arresting the imperial decay, the Young Turks actually accelerated it, suffering a string of humiliating defeats in the first Balkan War, losing most of what was then European Turkey. The humiliation only ended when the Christian victors—Serbia, Greece, Montenegro and Bulgaria—turned on each other in the second Balkan War and the Turks managed to reclaim some of their lost territory. Total disaster followed after the Young Turks plunged their creaky old empire into World War I on the side of the Central powers, proclaiming a jihad against the ultimately victorious Allies.

Unlike Enver Pasha and the other members of the Young Turk junta, Kemal Ataturk put no stock in jihads. While he would sometimes invoke the name of Allah to rally the masses during the early days of the republican struggle following World War I, his mission was modernizing and Westernizing Turkey.

While a new class of privileged, Westernized Turks rose to the top of republican society and replaced most of the old minority-dominated commercial and professional elites, millions of poor city dwellers and the vast majority of the rural peasantry remained poverty stricken, uneducated and, for better or worse, true to their old customs and Muslim faith in a quiet, low-key way. The shallow tide of Western modernity swept over them but did not carry them with it. If Ataturk—who played as hard as he worked and was a notoriously heavy drinker—had not died early, he might have completed his modernizing mission by sheer force of character. But his passing in 1938 at the relatively young age of fifty-seven left a void no successor could fill. His loyal wartime aide, Ismet Inonu—a brave soldier and a staunch patriot, but a leader of limited vision—succeeded him, but Ataturk’s initial reforms froze in place.

When he died on the morning of November 10, 1938, in his small, modest bedroom in Istanbul’s vast old Dolmabahce Palace, all the clocks in the building were stopped. They remain so to this day. Like the static moment of mourning each year commemorating Ataturk’s death, the stopped clocks in the Dolmabahce Palace serve as an unintentional reminder of what that premature death meant to Turkey: the beginning of a long era of suspended animation, of social and political inertia bordering on stasis. 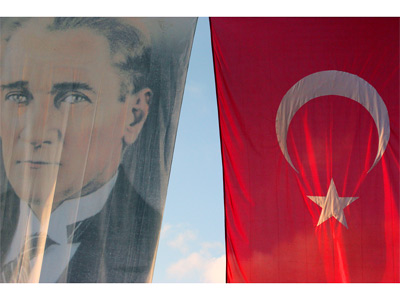 Pullquote: Like Peter the Great in Russia two centuries before, Ataturk was determined to overcome centuries of backwardness and decline, by brute force if necessary—and it often was.Essay Types: Essay