EUROPE’S DEBT crisis is threatening a political order that has been built up over the course of more than a half century. It is still entirely possible—indeed likely—that the European single currency will not survive the crisis. Angela Merkel, the German chancellor, has predicted that if the euro collapses, the European Union will crumble with it. The destruction of the EU would, in turn, remove the organization around which postwar European politics has been constructed.

Even if both the EU and the single currency survive, the current crisis is likely to extract an economic and political price that makes a mockery of many of the original hopes invested in the European Union. The founding fathers of the EU—men such as Jean Monnet and Robert Schuman—built their project around a brilliant and simple proposition. The purpose of the European project when it got going in the 1950s was explicitly political. The idea was to move Europe beyond the terrible wars that had disfigured the Continent during the first half of the twentieth century. But, while the goal was political, the means were economic. The founding fathers aimed to build a new Europe by initially concentrating on small, practical steps that brought tangible economic benefits. The idea was that economic cooperation would create shared prosperity and foster the habit of cooperation. The old national rivalries would be replaced by a win-win logic built around economic integration. As Europeans got used to working together and saw the benefits, further and bolder steps could be taken toward the “ever closer union” spoken of in the 1957 Treaty of Rome.

For more than fifty years, this vision worked beautifully. Europe prospered and grew—and hugely expanded its powers. By 2007, the year before the financial crisis hit, the European Union encompassed twenty-seven members. The simple coal-and-steel community of the 1950s had been transformed into a European Union with a single market, a single currency, common borders, and a common foreign and security policy.

Then came the global financial crisis. A sharp economic downturn in Europe exposed important weaknesses within the Union. Above all, it became clear that many countries had been running up unsustainable debts. In the new economic climate, Greece, Portugal and Ireland proved unable to fund themselves through the markets and had to apply for bailouts from the rest of the European Union. The borrowing costs of Italy and Spain soared, raising the prospect that they too might have to apply for financial help. Given the size of the Italian and Spanish economies and the level of their debts, bailouts for Italy and Spain might simply be unaffordable for the rest of Europe.

The debt crisis within the European Union is a lot more than a transient economic difficulty. In fact, it directly threatens the underlying logic of the European project. In good times, building Europe was all about creating a win-win dynamic based on sharing the fruits of prosperity. But in bad economic times, this positive logic has gone into reverse. Rather than sharing the gains of prosperity, Europeans are now arguing about who should bear the losses associated with recession and the debt crisis. Win-win logic has been replaced by zero-sum logic in which one country’s gain is another’s loss.

The political consequences of this have been dire. A European project created to bring nations together is now driving them apart. There is real bitterness in Germany at the idea that hardworking German taxpayers are having to subsidize the bankrupt economies of southern Europe. Semiracist stereotypes about lazy Greeks and law-breaking Italians are now common currency in the German press. These insults are being repaid with interest (unlike Greek bonds). In much of southern Europe, there is an explicit sense that the domineering German is back. Wartime images that the European Union was meant to have consigned safely to history are now bandied about again. Angela Merkel has been portrayed in Nazi uniform in cartoons in the Greek papers, and Nazi-era references are also rife in Italy and Spain.

TO UNDERSTAND how all this is likely to develop, it is important to make an accurate diagnosis of the origins of the crisis. Part of the problem is that the much-vaunted “European social model” is costly—and becoming more so as the population ages. The increase in debt and the fall in tax revenues, caused by the financial crisis and the resulting loss of investor confidence, exposed many dormant weaknesses of European welfare states.

But what might have been a series of national crises has become a European-wide crisis because of the existence of the European single currency. In retrospect, the decision to create the euro—made in the early 1990s and brought to fruition in 2001—was a fateful one.

The euro was swiftly and correctly recognized as the most dramatic single step yet taken toward European unity. As with the foundation of the original European project in the 1950s, the motive was primarily political. The fall of the Berlin Wall and the reunification of Germany had altered the balance of power within Western Europe—and revived British and French fears of German power. Initially, the leaders of both Britain and France, Margaret Thatcher and Francois Mitterrand, sought to block German unification. When it became clear that this wasn’t possible, the French threw their weight behind the idea of a European single currency (an idea Thatcher strongly opposed). Both the French and German leaders at the time—strongly backed by Jacques Delors, the powerful president of the European Commission—argued that the solution to the new “German problem” was to bind Germany even more tightly into Europe, thus negating any prospect that a powerful reunified Germany could become troublesome on the Continent. The means to do this was the creation of the European single currency.

Today, now that the euro is in deep trouble, there are many in Germany who argue that their country was essentially forced to give up its beloved Deutsche mark as the “price for unity.” But this is a misreading of history. In fact, some of the most articulate and impassioned advocates of the European single-currency project were German statesmen such as Chancellor Helmut Kohl and Joschka Fischer, Germany’s foreign minister and author of the famous 2000 Humboldt speech extolling political union in Europe.

Even as the European single currency was being dreamed up and launched, skeptical economists warned that the European Union was not an “optimal currency area.” They argued that levels of productivity and indebtedness within Europe differed too widely. As a result, they maintained, relatively unproductive countries, deprived of the chance to devalue or inflate their debts away, might find themselves in an economic trap. More broadly, many Euroskeptics noted that there had never been an example of a successful and durable currency union that was not backed up by a political union—otherwise known as a nation.

The response to this Euroskeptic critique was threefold. First, many pro-euro economists argued that the very creation of the euro would foster economic convergence—creating an optimal currency area. Second, on the political front, some argued that a common currency could work without a political union on the basis of the rules and regulations of the Maastricht Treaty, drafted and signed in the Netherlands in the early 1990s. Third, some committed European federalists argued that political union would prove irresistible in due course. The mere existence of a single currency, they averred, would foster the expansive federal-budget growth and fiscal transfers within the EU that would be necessary to make the single currency work over the long term. This was how the European project had always worked in the past—with one step toward unity provoking the next. As Javier Solana, the EU’s foreign-policy chief, once colorfully put it in conversation with me: “Our philosophy in Europe is, ‘Jump in the pool, there is always water there.’”

It is tempting to respond that, in the current crisis, Europe has discovered that somebody forgot to fill up the pool. In reality, the Euroskeptic analysis of the flaws of the European single-currency project has proved to be much more accurate than the predictions of those who created the euro.

The single currency has not, in fact, fostered the economic convergence needed to make it work well. On the contrary, as Germany acted to restrain wages and public spending in the first years of the new century, countries in southern Europe went on a spending splurge: the minimum wage doubled in Greece over the course of a decade; Spain experienced a wild housing boom; and Italy’s national debt shot back up toward 120 percent of GDP. The result was that, by the time the economic and financial crisis hit in late 2008, the supercompetitive German economy was booming—while many of the economies of southern Europe were structurally uncompetitive.

The political assumptions behind the creation of the European single currency have also failed to be realized. The rules and regulations meant to ensure the smooth operation of the euro were swiftly violated. In particular, the Stability and Growth Pact, designed to prevent countries from running excessive budget deficits by threatening them with automatic fines, was essentially junked in 2003, when it became clear that France, Germany, Italy and Portugal all faced fines. Rather than the euro leading to deeper political union, it became apparent that European leaders were unable and unwilling to live with even the minimal common budgetary rules they had created. 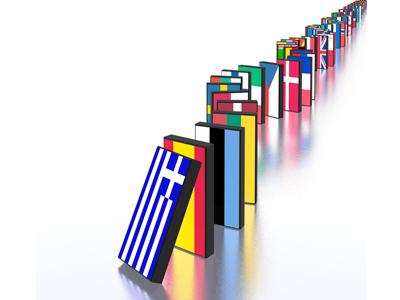 Pullquote: In domestic politics across Europe, leaders are experiencing a backlash against the European project and the further sacrifices of national sovereignty it is demanding.Essay Types: Essay