This new understanding of revolutions partly reflected the simple fact that the French Revolution was indeed a very different sort of event from its predecessors. Instead of its principal political changes coming to an end quickly, culminating in a document such as a declaration of independence, a process of explosive radicalism continued to build, leading to the deadly Reign of Terror of 1793–1794. But the new ways of thinking themselves provided a spur to radicalization, by giving the political actors of the day a way to see “revolutions” as exceptional historical moments in which ordinary practices and principles could be suspended. The leading figure of the Terror, Robespierre, developed an entire political theory on this basis. In a legislative report he wrote in the winter of 1793–1794, he distinguished between ordinary “constitutional” government, whose role was to govern a republic, and “revolutionary” government, whose role was to found the republic. In the latter, he argued, the state needed far greater leeway, both to protect its citizens and to ensure that institutions would be given a durable form. “The Revolution,” he thundered, “is the war of liberty against its enemies.” Several of Robespierre’s allies openly urged him to become a “dictator,” a title still then associated with the ancient Roman military office of the name, and which they viewed favorably. In theory, the dictatorship would end once the republic had been durably founded, and the revolution completed, but given the vastness of the radicals’ ambitions, it was not clear when this goal would be reached. “Revolution” was becoming not just a process, but also a utopian one that might extend into the future, indefinitely.

This new concept of revolution as what G. W. F. Hegel would call a “world-historical” event helped to justify the French revolutionaries’ most outlandish projects. These included a new calendar, which started with the birth of the French Republic; the attempt to replace Christianity either with state-sponsored atheism or Robespierre’s deistic “Cult of the Supreme Being”; plans for universal education and charity; and, dangerously, the transformation of a war against other European powers into a crusade for universal human liberation. Robespierre and his allies went so far as to characterize “revolutions” as millennial projects that could literally change human nature. “The French people seem to be about two thousand years ahead of the rest of the human race,” he mused in the spring of 1794. “One is tempted to regard them as a separate species.”

IT IS HARD to exaggerate the hold that this French model of revolution exerted over imaginations throughout the world in the nineteenth and twentieth centuries. In country after country, generations of would-be revolutionaries plotted to take power and instigate upheavals of similar or even greater ambition. Starting in the mid-nineteenth century, the model was potently combined with socialist visions of history as a story of class struggle, but the idea of revolution itself as an ongoing, consciously directed process remained much the same. In Russia, China, Southeast Asia, Latin America and the Middle East, self-proclaimed “revolutionary” regimes took power with goals of nothing less than transforming human beings into something new and better. In Terrorism and Communism, written at the height of the Russian Civil War, Leon Trotsky (a great admirer of the French Revolutionary Terror) expressed sentiments very close to those of Saint-Just and Robespierre:

We were never concerned with . . . prattle about the “sacredness of human life.” We were revolutionaries in opposition, and have remained revolutionaries in power. To make the individual sacred we must destroy the social order which crucifies him. And this problem can only be solved by blood and iron.

Mao Zedong, who repeatedly spoke of revolution as a long and arduous road, called its ultimate goal the changing of society and the establishment of a new sort of human freedom (he also famously remarked that “a revolution is not a dinner party”).

Of course, in country after country these later revolutions produced even greater chaos and bloodshed than in France. In Russia and China and Southeast Asia, the number of victims stretched into the millions. And finally, after the Russian Civil War, Stalin’s terror, the Gulag, the Chinese Cultural Revolution and the Cambodian holocaust, the myth of a redemptive, world-transforming revolution lost its allure, as one moment of dreadful disillusionment followed another. By the late twentieth century, when the self-proclaimed revolutionary regimes of the Soviet bloc began to crumble, the dissidents who stepped into the breach generally refused the label of “revolution” altogether. As the Polish Solidarity leader Jacek Kuron informed French readers in a remarkable newspaper column in the summer of 1989—as the Poles were ousting the Communists and the French were marking the bicentennial of 1789—the age of revolution was over, and a good thing too. Germans self-consciously refer to the events of 1989–1990 not as a “revolution,” but as die Wende—“the change.”

In some cases, the exhaustion that has followed upon bloody utopian experiments has itself created the conditions under which moderate democratic regimes could eventually take root. In France, for instance, the events of 1789 marked the start of nearly nine decades of astonishing political turmoil. Monarchies, republics and empires succeeded each other so rapidly that, according to one popular joke, libraries began storing copies of the constitution in the “periodicals” section. But finally, after the fall of Napoleon III during the Franco-Prussian War, and one final outburst of radical utopianism in the doomed Paris Commune of 1871, a relatively stable, moderate republic was established, and it lasted until the Nazi occupation of 1940. François Furet, one of twentieth-century France’s great historians, labeled the entire long period from the late eighteenth century to the late nineteenth as “the French Revolution.” In his view, it only came safely “into port” with the Third Republic in the 1870s. But it is hard to argue that the turmoil and bloodshed was necessary to achieve this relatively limited goal. And, of course, in many other countries—Russia and China, most obviously—similarly long periods of revolutionary disruption have so far failed to produce similarly benign outcomes.

THIS LONG PROCESS of disillusionment helps explain why, today, revolutions are expected to be so quick and neat. If revolutionary movements no longer come bearing utopian hopes of redemption, then there is less need for them to extend indefinitely into the future. And indeed, most of the revolutions that have taken place since 1990, such as the “color revolutions” in the Soviet bloc and the revolutions of the Arab Spring, have aimed at relatively modest goals, in comparison with their French or Russian or Chinese predecessors: representative democracy, stability, the rule of law, human rights. The great exceptions to this rule, of course, are the Islamists, who hope to impose their vision of godly order on human societies. The Iranian Revolution was in this sense the last of the great line of utopian revolutions that began in the eighteenth century. Francis Fukuyama has been widely mocked for his 1989 National Interest article “The End of History?” and his prediction that free-market democracy would become universal throughout the world. But with the exception of the Islamic world, free-market democracy has indeed overwhelmingly become the preferred political model in most countries. As Fukuyama himself put it: “At the end of history it is not necessary that all societies become successful liberal societies, merely that they end their ideological pretensions of representing different and higher forms of human society.” At the heart of these earlier ideological pretensions was the idea that the means to these “higher forms” was a French-style revolution.

Of course, even where free-market democracy has become the preferred model, reality has often failed quite dismally to comply. Back at the time when Fukuyama wrote, nearly all observers woefully underestimated the sheer difficulty of instituting such systems in countries plagued by poverty and ethnic and religious differences, and lacking experience in the rule of law or the toleration of opposition. The goal of a revolution may be entirely clear: for example, to transform your country into something resembling Finland. But how can that goal be reached?

This is a question that continues to bedevil political scientists. But the experience of Europe, first after the end of World War II, and then after the collapse of Communism, suggests at least one absolutely crucial condition: a proper structure of incentives for the population in question. After the defeat of 1945, as recent historical work has stressed, the population of West Germany did not magically lose all attraction to Nazism. But the West Germans knew the victorious Allies would not tolerate any serious attempts to revive Hitler’s regime. And at the same time, they quickly learned that moves toward democracy would reap them substantial rewards in the form of Marshall Plan aid and inclusion in the new Western military alliance. Likewise, after 1989 the people of Poland had relatively little to draw on in the way of democratic tradition. But they understood that free-market democracy would bring the massive rewards of closer connections to Western Europe—culminating in European Union membership—and the protection of NATO. In both these countries, the incentives to build free-market democracy proved more than sufficient to overcome the natural tendency of factions within a state to grab what they can for themselves, and to do whatever possible to keep their enemies out of power. In each country, it was generally recognized that there was far more to gain from establishing democratic, free-market institutions. 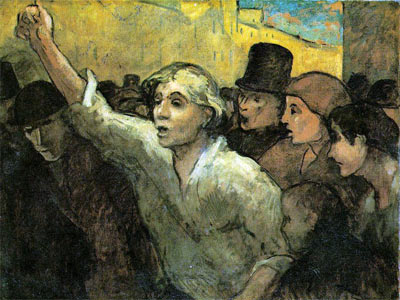