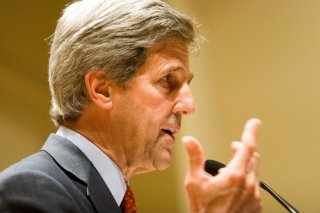 Is Senator John Kerry an isolationist? Writing in the Washington Post, Robert Kagan of the Carnegie Endowment for International Peace suggested that Senator Kerry might be the agent of an isolationist backlash against the unilateralism of President George W. Bush. "Some Europeans have been quietly worrying" about that prospect, reported Kagan. "After hearing Kerry's speech" at last month's Democratic National Convention, "they may worry a bit more."

Senator Kerry's address certainly lent itself to such interpretations. In Boston and on the stump since then, he has maintained that the United States, "throughout all of our history," has lived up to a "standard," namely that the Republic "never goes to war because we want to, we only go to war because we have to." Alluding to Iraq, he has vowed to return to that standard if elected president.

Leave aside the Democratic contender's dubious reading of U.S. history. Kerry now faces a quandary of his own making. President Bush didn't go against the wishes of the electorate when he ordered the invasion of Iraq; he took the nation to war with strong public support and the formal approval of Congress. To lay claim to foreign-policy leadership, Kerry somehow needs to absolve voters - voters whose favor he needs to win the White House - of supporting Operation Iraqi Freedom and the larger Bush Doctrine.

The isolationists of the 1930s faced a similar quandary. Like Kerry today, they insisted that the United States should go to war only for reasons of self-interest, narrowly construed. Since America faced no obvious threat in the 1930s, its proper policy was to insulate itself as best it could from foreign political entanglements.

The trouble for isolationists was that their argument applied equally to the United States of 1914-17, which had entered World War I on a wave of public support. Thus the challenge for them was to explain why the American electorate had supported entry into world war against its obvious - to isolationists - interest in non-entanglement. In short, they crafted a version of U.S. history compatible with isolationist principles.

Senator George Norris and Senator William Borah accused British propaganda of duping America into war on false moral pretenses. When that argument went nowhere, the Wilson Administration fell under scrutiny. But the Senate erupted when Senator Gerald Nye accused President Woodrow Wilson and his Secretary of State, Robert Lansing, of having "falsified," or lied about their knowledge of secret pacts among the Allies.

The ensuing furor almost put an end to Senator Nye's inquiry into the causes of World War I. It did end the assault on the reputation of the former president. Senator Carter Wilson, to name one example among many, allowed that "any man who would asperse the integrity and veracity of Woodrow Wilson is a coward" and that the charges leveled against Wilson were "not only malicious but positively mendacious."

The isolationists finally gained traction with what the historian Charles Beard called "the devil theory of war," namely the notion that political phenomena, including war, were ultimately traceable to economic causes. A mainstay of isolationist thought, the devil theory found receptive audiences both among liberal and radical isolationists resentful of Eastern economic elites and among a populace hit hard by the Great Depression.

For the conspiratorially-minded, munitions makers were the archfiends. Unlike "War Hawks," the "Slave Power," and other factions that had openly prodded the Republic into past wars, the sinister interests depicted by isolationists operated in secret, placing self-interest above patriotism. An influential 1934 article in Fortune magazine accused arms firms of using their political influence to prolong wars and disturb world peace for private gain.

While the Fortune article focused almost exclusively on European firms such as Krupp and Vickers-Armstrong, it generated an outcry at home that found voice in muckraking tomes such as F. C. Hanighen's "Merchants of Death." Alarmed at the influence of munitions makers and at mounting tensions in East Asia, pacifist and veterans' groups pressured Senator Nye to introduce a resolution calling on the Senate Foreign Relations Committee to investigate the arms industry.

Taking the profit motive out of war was the chief concern of these groups and of the Nye Committee created at their behest. After two years of hearings, the committee found, for instance, that firms such as the Electric Boat Company had conspired to dominate the world market for submarine construction. Its report proclaimed that it was "against the peace of the world for selfishly interested organizations to be left free to goad and frighten nations into military activity."

The Nye Committee didn't stop at finding fault. It proposed constitutional amendments to "permit the commandeering of plants, goods, and industrial equipment for public use in war, without the determination of 'fair compensation' in the present way," and empower Congress to levy surtaxes on war profits as lawmakers saw fit. Indeed, the munitions industry would face de facto nationalization.

The committee thus gave sustenance to isolationist claims that Americans had been beguiled into war in 1917 against their own interests.

This history lesson shows just how inapt the comparison between John Kerry and the 1930s' isolationists really is. There are some superficial similarities. Senator Kerry has accused President Bush of misleading America into war, toyed with the notion that U.S. contractors - Halliburton, anyone? - were the impetus behind the decision to invade Iraq, and sketched a highly restrictive doctrine for future military operations.

So Senator Kerry has flirted with a modern equivalent to Charles Beard's "devil theory." Still, the differences between his vision of American foreign policy and that of Nye & Co. are even starker. Kerry's forceful advocacy of multilateralism and his calls to rebuild America's military alliances would've discomfited true isolationists, as would the increasingly hawkish tone of his campaign pronouncements.

John Kerry is arguably erratic on foreign and defense policy. You can quibble with him for espousing an ahistorical and overly narrow view of the national interest. But he's no isolationist.