In my vision of peace, there are two free peoples living side by side in this small land, with good neighborly relations and mutual respect, each with its flag, anthem and government. . . . If we get a guarantee of demilitarization, and if the Palestinians recognize Israel as the Jewish state, we are ready to agree to a real peace agreement, a demilitarized Palestinian state side by side with the Jewish state. SEEMINGLY, IT was a historic moment. The prime minister of Israel and leader of the Likud Party publicly embraced the two-state solution. A short while into his second term in office, ten days after the newly inaugurated president of the United States promised in Cairo to “personally pursue this outcome,” Netanyahu declared an about-face, shifting from the traditional course he and his political camp had once pursued.

Thus, more than ninety years after the Balfour Declaration of November 1917, it appeared the successors of the founders of Zionism were moving toward a historic compromise to resolve the conflict embedded in that intentionally vague statement. It is the conflict between “the establishment in Palestine of a national home for the Jewish people” and “nothing shall be done which may prejudice the civil and religious rights of existing non-Jewish communities in Palestine.”

Now it appeared that this dispute, which for decades had split Israeli society into rival political camps, could be resolved. Forty-two years after the occupation of the West Bank and the Gaza Strip, formerly held by Jordan and Egypt, a right-wing prime minister declared his willingness to return these territories to the people living in them, as well as his consent for the establishment of a new, independent state of Palestine.

But almost immediately, other voices emerged questioning whether this solution—dividing the land into two independent, coexisting states—was still feasible; whether the “window of opportunity” that might have been available in the past had already closed for good; whether the Israeli settlement enterprise in the West Bank had reached a point of no return, creating a new situation that did not allow for any partition; and whether the division of political powers within Israeli society had changed, making the dramatic move impossible. As Robert Serry, UN special coordinator for the Middle East peace process, put it:

If the parties do not grasp the current opportunity, they should realize the implication is not merely slowing progress toward a two-state solution. Instead, we could be moving down the path toward a one-state reality, which would also move us further away from regional peace.

This article focuses on the Israeli side of this equation in part because the Palestinian leadership, as far back as 1988, made a strategic decision favoring the two-state solution, presented in the Algiers declaration of the Palestinian National Council. The Arab League, for its part, voted in favor of a peace initiative that would recognize the state of Israel and set the terms for a comprehensive Middle East settlement. Meanwhile, various bodies of the international community reasserted partition of the land as their formal policy. But Israel, which signed the Oslo accords nearly two decades ago, has been moving in a different direction. And Netanyahu’s stirring words of June 2009 now ring hollow.

Israel never overtly spurned a two-state solution involving land partition and a Palestinian state. But it never acknowledged that West Bank developments had rendered such a solution impossible. Facing a default reality in which a one-state solution seemed the only option, Israel chose a third way—the continuation of the status quo. This unspoken strategic decision has dictated its polices and tactics for the past decade, simultaneously safeguarding political negotiations as a framework for the future and tightening Israel’s control over the West Bank. In essence, a “peace process” that allegedly is meant to bring the occupation to an end and achieve a two-state solution has become a mechanism to perpetuate the conflict and preserve the status quo.

This reality and its implications are best understood through a brief survey of the history that brought the Israelis and Palestinians to this impasse. The story is one of courage, sincere efforts, internal conflicts on both sides, persistent maneuvering and elements of folly.

IN AUGUST 1993, the foreign ministers of Israel and the Palestine Liberation Organization (PLO), Shimon Peres and Mahmoud Abbas, signed a declaration of principles. In September of that year, Israeli prime minister Yitzhak Rabin and PLO chairman Yasir Arafat exchanged the “letters of recognition,” which led to an impressive signing ceremony on the White House lawn. Words about historical compromise, reconciliation and peace filled the air. The world perceived a true, deep change sweeping the Middle East, with both sides resolved to divide the land into two states.

Nevertheless, the negotiating partners’ starting points remained far apart. The Palestinians considered engaging in a process based on the acceptance of the 1967 borders to be a major compromise in itself. They believed their willingness to settle for territory representing 22 percent of mandatory Palestine was already an immense compromise foreclosing much further concession. Israel, in contrast, considered these borders the starting point for talks and never intended to withdraw fully from the occupied territory.

We would like this to be an entity which is less than a state, and which will independently run the lives of Palestinians under its authority. The borders of the State of Israel, during the permanent solution, will be beyond the lines which existed before the Six Day War. We will not return to the 4 June 1967 lines.

Rabin further referred to different areas of the West Bank that Israel would insist on keeping, including regions that no Palestinian negotiator could give up.

Because of these differences, the Oslo accords were originally labeled an interim agreement “for a transitional period not exceeding five years,” meant to lay the foundations for “a permanent settlement based on Security Council Resolutions 242 (1967) and 338 (1973).” Yet, even though the final objective intentionally remained vague, the agreement itself listed detailed timetables for the implementation of interim phases, including, most remarkably, an Israeli withdrawal from the cities of Gaza and Jericho in three months. Already in this sensitive initial phase, cracks appeared. “No dates are sacred,” said Rabin in December 1993, as the deadline for withdrawal was being postponed.

Nevertheless, despite the evident differences between both sides and the difficulties that were clear from the beginning, two-state-solution supporters believed the dynamics of the process would generate their own power, which would force the parties to take brave steps and reach an ultimate resolution. Whatever actual force these developments could have set in motion, the effort suffered a fatal blow on November 4, 1995, when an opponent of the agreement killed the prime minister.

SIX MONTHS later, Israel conducted elections between two candidates for prime minister—Shimon Peres, perceived as a progenitor of the Oslo plan, and Benjamin Netanyahu, a fierce opponent of the process throughout his time as head of the parliamentary opposition. Netanyahu won narrowly.

His election marked a new era in Israel’s attitude toward the negotiations. Prior to Rabin’s assassination, one could reasonably argue that the main motivation of the government was to conclude an agreement. But Netanyahu did everything possible to safeguard the negotiations as a framework while concurrently evading their declared objective. All of his successors as prime minister followed this pattern.

Netanyahu himself testified to this scheme and his way of handling it in a private conversation in 2001, when he was out of office. Unaware that he was being recorded, he bragged about the manipulative tactics he had used in his first tenure as prime minister to undermine the Oslo accords. He explained that he had insisted the Clinton administration provide him with a written commitment that Israel alone would be able to determine the borders of the “defined military sites” that would remain under its control. He went on to say that by defining the entire Jordan Valley as a military location, he “actually stopped the Oslo Accord.” He was right. Without this large area, the Palestinians wouldn’t have a viable state.

Indeed, under Netanyahu’s first tenure as prime minister, which ended in 1999, little progress was made in implementing the agreed-upon phases or moving toward a final-status agreement. When the five years allocated for the transitional period passed, no Palestinian state seemed near.

During his first term, Netanyahu came under attack from both sides. Those opposed to dividing the land were furious that he didn’t spurn the peace process overtly. Supporters of the accords, meanwhile, protested against his foot-dragging in implementing the agreement’s provisions. All condemned Netanyahu’s indecision. But these critics failed to perceive that Israel’s new status quo approach was actually a choice—and, indeed, a policy.

No one publicly embraced this decision, and yet it seemed to generate its own momentum as various players quietly understood that it served their purposes. A report published by the International Crisis Group, tellingly titled “The Emperor Has No Clothes: Palestinians and the End of the Peace Process,” lists benefits to the various partners in the so-called peace process, including the entities known collectively as the “quartet” (the UN, United States, European Union and Russia). The Europeans, said the report, wanted influence in the Middle East, and by funding the Palestinian Authority (PA) they found they could get a seat at some prestigious diplomatic tables. Russia and the UN harbored similar desires for diplomatic advancement. 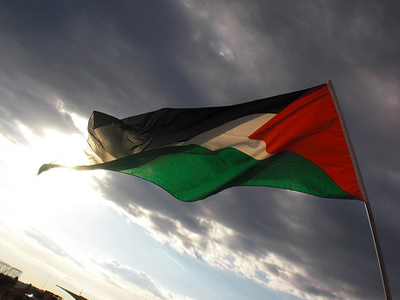