IN APRIL, India launched a long-range missile capable of carrying a nuclear bomb deep into the Indian Ocean. The successful Agni missile test fulfilled India’s fifty-year quest to achieve the means of dispatching a nuclear weapon to Beijing. Just about fifty years ago, in October 1962, India fought a brief war against China in the Himalaya Mountains. India lost that war—and vowed it would acquire the capacity to deter Chinese aggression.

The Sino-Indian war also posed a crisis for America’s young president, John F. Kennedy, who had entered office determined to build a strong U.S. relationship with India. But his attention that fateful autumn was diverted to a more ominous crisis—the one involving Soviet efforts to place nuclear missiles in Cuba—that unleashed a dangerous nuclear face-off with the Soviet Union. Thus, Kennedy confronted two simultaneous crises, one far overshadowed by the other at the time and also later in history.

But Kennedy’s handling of the 1962 war—in the midst of a far graver national challenge—offers lessons today for those interested in the ongoing diplomatic conundrum posed by India and its mutually hostile neighbor, Pakistan.

When Kennedy became president in January 1961, the United States and India were estranged democracies. Throughout the 1950s, President Dwight Eisenhower had tilted his administration’s subcontinent diplomacy toward Pakistan’s military dictatorship and away from India. After all, Pakistan offered its territory as a secret base for America’s U-2 spy planes, which were used effectively to penetrate Soviet airspace and collect valuable intelligence on Washington’s Cold War adversary.

India’s neutralist government in New Delhi never would have contemplated such an arrangement. So Ike cut his deal with Pakistan, which included the sale of F-104 jets and Patton tanks, both superior to India’s weapons. Needless to say, this didn’t endear the American government to New Delhi.

In the 1960 presidential campaign, Kennedy promised a departure from Eisenhower’s foreign policy—more vigorous and less accepting of Western colonialism. Though an ardent cold warrior, Kennedy also recognized that the winds of change were whipping around the world, ending the era of colonial empires. He had been an early critic of France’s colonial war in Algeria, for example, and he understood that many of the new postcolonial states would resist pressures to join one bloc or another in the Cold War.

Further, as a senator Kennedy had sponsored legislation to increase food aid to India. And so it wasn’t surprising that as president he sought to woo India and its leader, Jawaharlal Nehru, into a closer relationship with Washington that didn’t require any formal anticommunist commitment from India. He sent his friend John Kenneth Galbraith to New Delhi as U.S. ambassador.

Yet Kennedy also wanted to maintain a tight alliance with Pakistan. Like presidents before and after, he tried to befriend both nations. He invited Pakistan’s president Mohammad Ayub Khan to visit the United States twice during his thousand days in office. In July 1961, Ayub was feted in New York with a ticker-tape parade on Fifth Avenue and in Washington with a full state visit including a state dinner at Mount Vernon, the only time that the first president’s mansion has hosted a state dinner. A year later, in September 1962, Kennedy hosted Ayub again at the family home in Newport, Rhode Island, and his farm in Middleburg, Virginia. Ayub gave Jacqueline Kennedy a horse. The Kennedy team hailed Pakistan as a reliable ally against communism and a model for development in the Third World.

But it was the India relationship that most preoccupied Kennedy as he contemplated U.S. relations with South Asia. Galbraith’s appointment put a Kennedy man and a firm advocate of his New Frontier at the center stage of U.S.-Indian relations. No president since has sent such a close friend and high-powered representative to New Delhi as ambassador.

Galbraith frequently wrote Kennedy long letters from India in which he commented not only on India and South Asia but also on global developments, domestic issues, economics and especially the growing conflict in South Vietnam, where he was an early and prescient critic of U.S. involvement. His letters and diary, which have been published, offer penetrating insights into this period.

Kennedy never traveled to India during his presidency, but Jacqueline Kennedy visited both India and Pakistan in March 1962. The charismatic and photogenic first lady was a big hit. Nehru was so entranced that he kept a photo of Mrs. Kennedy in his private study for the rest of his life. The Peace Corps, created by Kennedy early in his tenure, also drew the United States and India closer together, as did other factors such as enhanced American economic assistance and the candid dialogue between top leaders. Nehru visited the White House in November 1961 at the age of seventy-one, accompanied by his daughter Indira (though that visit was undercut a bit by the fact that Nehru seemed old, tired and disengaged).

BY FAR the most important development in the relationship emerged with the Chinese invasion of India in October 1962. Like much of India’s borders, the boundary between China and India was set by the British in the nineteenth century. The small kingdom of Tibet was given a border drawn to the Raj’s advantage. The western portion of the border was known as the Johnson line, dividing Kashmir from China. The eastern one was the McMahon line, dividing Assam in eastern India from China. Both lines were named after British diplomats. When China invaded Tibet in October 1950, it therefore inherited a border it did not regard as legitimate or fair. Negotiations between Beijing and New Delhi in the 1950s proved futile. But China opened negotiations with Pakistan on their shared border in Kashmir, and the result was the cession of a large part of northern Kashmir to China and an agreed border between Islamabad and Beijing.

Nehru championed Communist China’s right to take over China’s permanent seat at the United Nations Security Council, which was still held by the Nationalist Party government in Taiwan. He sharply criticized America’s refusal to recognize the People’s Republic of China and portrayed China and India as kindred spirits, two great Asian countries that had been exploited by Western imperialism but now were free and independent.

So it was a crushing blow to Nehru and India in October 1962 when China surprised them and invaded to seize control of territories it claimed along the 3,225-kilometer border. The Chinese forces, superior in leadership and weapons, routed the Indian Army, which retreated in confusion from the Himalayas. The situation was most precarious in India’s easternmost regions, which were linked to the rest of the country only by a narrow land connection north of what was then East Pakistan. After maintaining its neutrality in the Cold War for fifteen years, India found itself the victim of a Chinese invasion it was powerless to halt. Nehru was devastated. He reluctantly turned to the United States and Britain, asking for immediate supplies for the Indian Army. In his panic, he also requested the deployment of American bombers to repulse the Chinese advance. America unexpectedly found itself arming both Pakistan and India, with no assurance they would not use the weapons against each other.

It is clear from Galbraith’s diary that Washington was surprised by the Chinese invasion. But, with the U.S. bureaucracy fixated on the life-and-death duel over Cuba, Galbraith was given almost no instructions from the White House or State Department during the key period of the Indo-Chinese crisis. Thus, he became the main decision maker on the American side, a role he relished. As he wrote, “Washington continues totally occupied with Cuba. For a week, I have had a considerable war on my hands without a single telegram, letter, telephone call or other communication of guidance.” To add another element of drama, the crisis also coincided with the move of the ambassador and his family into a new residence, Roosevelt House, where the staff could find no dishes and Galbraith was without a room suitable for small, intimate discussions.

Working closely with his British counterpart, as U.S. diplomats typically do in South Asia, Galbraith fashioned a response that backed India and delivered much-needed military assistance to the Indians. Once a request for aid was formally transmitted, the first American shipments of military support arrived by air four days later. British support came as well.

Chinese intentions were impossible to decipher. After their initial victories, they paused for several weeks. Then they attacked again with devastating results, driving the Indians back in the East. Had they pressed on in the most vulnerable sector, they could have cut off Assam and eastern India and linked up with East Pakistan. Even Calcutta was at risk. Nehru asked for more aid—a dozen squadrons of American fighters and two squadrons of bombers—to redress the imbalance. In his desperation, he sought direct American military intervention, at least in the air. This would have meant war with China.

There ensued many anxious moments in New Delhi, Washington and London until China unilaterally announced a cease-fire on November 19, 1962. Kennedy never had to answer the request for air power. The war was over; India was humiliated; Nehru was devastated. But U.S.-Indian relations were better than ever before. America’s approval ratings among Indians soared from 7 percent at the start of the war to 62 percent at the end. 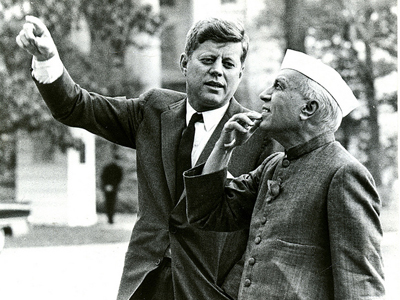 Pullquote: It is virtually impossible to have good relations with both India and Pakistan. We may want them to stop being rivals, but they can’t escape their history and geography.Essay Types: Essay