THE OFFICE of the assistant to the president for national-security affairs in the West Wing of the White House is a spacious, well-lit corner room in a building where space is at a premium. It contains not only the national-security adviser’s large desk but also a table for lunch discussions and other small meetings as well as a couch and easy chairs for more relaxed discussions. In April 2007, this commodious setting was the scene of a remarkable meeting. Stephen Hadley, the national-security adviser at the time, welcomed Meir Dagan, head of Israel’s Mossad intelligence service, who came with a special briefing for his American host. Dagan revealed a secret nuclear reactor in the final stages of construction in the Syrian desert, developed with the help of North Korea. Knowledge of this project constituted a stunning intelligence coup for Israel.

Later that year, on September 6, 2007, the Israeli Air Force destroyed Syria’s nuclear facility at Al Kibar along the Euphrates River. The mission emerged from more than two decades of comprehensive intelligence collection and analysis by American and Israeli intelligence services targeting Syria’s development of weapons of mass destruction. It was a dramatic demonstration of intelligence success—all the more so given the ongoing civil war that has devastated Syria since 2011. The world does not need to worry about a Syrian nuclear reactor under threat of capture by Islamic radicals. Israel took that concern off the table.

But the incident also demonstrated that once a policy-intelligence feedback loop becomes dysfunctional, as happened to the George W. Bush administration after it exaggerated and distorted intelligence estimates to justify the Iraq War, there are serious policy implications. Israel wanted America to take out the reactor, but Bush was constrained by an intelligence community unwilling to cooperate with another major military operation based primarily on intelligence data.

THE STORY begins in the early 1980s, when the Syrian government began developing weapons of mass destruction. Despite achieving strategic surprise in the Yom Kippur War and foiling Israel’s ambitions to remake Lebanon into an ally in the 1982 Lebanon war, Damascus recognized that it was no match for Israel in a conventional war. The Israel Defense Forces (IDF) marched to the outskirts of Damascus in 1973 and nine years later evicted the Syrians from Beirut and southern Lebanon. Thus, President Hafez al-Assad sought to develop chemical weapons to create a balance of terror between Israel and Syria that would deter Israel from threatening Damascus or trying to oust his regime in any future conflict.

Assad turned to Syria’s preeminent scientific-research establishment to begin developing weapons of mass destruction to threaten Israel’s cities. By the mid-1980s the Centre d’Etude et de Recherche Scientifique (CERS) in Damascus was able to develop a reliable chemical weapon using the nerve agent sarin. Sarin, discovered by four German scientists just before World War II and named as an acronym of their last names, is estimated to be more than five hundred times as toxic as cyanide. CERS scientists were able to produce the nerve agent in significant quantities and achieve a high level of purity to make it lethal.

The Syrians then mated the chemical weapon with a reliable delivery system, the Soviet-built Scud missile, also a weapon of German design. The Russians essentially copied the German V-2 missile after the Second World War and in the 1970s began exporting the system to their Arab allies. Mating a chemical warhead to a missile is not a simple technical challenge, but the Syrians succeeded in doing so in the mid-1980s and successfully carried out tests with the system. Syria also developed chemical bombs that could be dropped by aircraft. Syria was not alone in developing sarin weapons; Iraq did so as well and actually used them extensively, along with other chemicals, on the battlefields of the Iran-Iraq war.

In January 1988, the Sunday Times of London reported on its front page that Israeli officials had informed the paper that Syria had successfully developed the chemical warheads for its Scud missiles and that Israel was considering a preemptive attack to destroy the manufacturing plants. Syria denied that it was making chemical weapons. In the end, Israel chose not to initiate a preemptive strike, probably because the Syrians had developed a sufficient number of manufacturing plants, finished warheads and missiles that an attack likely would fail to eliminate the danger and might provoke a Syrian strike on Tel Aviv.

Syria continued to refine its chemical weapons during the 1990s even as it pursued peace negotiations with the Israelis. In addition to sarin warheads, it also developed the even more toxic nerve agent VX and expanded the number of its missile delivery systems with assistance from North Korea. The American and Israeli intelligence communities monitored the improvement of the Syrian arsenal. In January 2000, the Syrian-Israeli peace process led to a summit in Shepherdstown, West Virginia, that came tantalizingly close to a peace agreement. But it fell just short of culmination. The draft agreement made no mention of Syria’s WMD. Two months later, a final effort to arrange a peace agreement failed at a summit between Assad and President Bill Clinton in Geneva. In June 2000, Assad died and was succeeded by his son Bashar.

Before the elder Assad’s death, he entered into discussions with North Korea on a highly secret program to build a nuclear reactor in western Syria with Pyongyang’s assistance. According to former CIA director Michael Hayden, cooperation between Syria and North Korea on nuclear issues began in the late 1990s, perhaps in 1997. A subsequent review of imagery indicates that construction at Al Kibar began in 2002. According to Hayden, the CIA saw the construction as suspicious but did not recognize it as a nuclear reactor until “a report from a foreign partner initially identified the structure at Al-Kibar as a nuclear reactor similar to one in North Korea.”

THE ISRAELIS tentatively identified the reactor for what it was in late 2006. According to Israeli and German press reports, the Mossad obtained access to the laptop computer of a Syrian government official while he was visiting London in 2006. The laptop contained construction plans, letters and hundreds of photographs of the reactor at various stages in its development since 2002. Most importantly, the photographs of the interior of the site demonstrated it was a nuclear reactor. It is unclear if the Israelis had British cooperation in gaining access to the computer.

The CIA then employed classic “multidisciplinary, blue-collar analysis,” as Hayden put it, to bring together “virtually every form of intelligence—imagery, signals, human source, you name it . . . so that they were never completely dependent on any single channel” of source material. He highlighted the “quality of tradecraft, in terms of collection and analysis, and the value of collaboration . . . with foreign services.”

A six-minute CIA video, released after the reactor’s destruction, indicates the agency analysis demonstrated that the Al Kibar facility was a gas-cooled, graphite-moderated nuclear reactor intended to produce plutonium for nuclear weapons. Al Kibar was a North Korean design, similar to that country’s reactor at Yongbyon. Only North Korea had built reactors of this design in the previous thirty-five years. The CIA reached its conclusions by using satellite imagery, ground photographs of the interior of the facility and a computer-produced graphic image of the reactor. It also photographed North Korean personnel in Syria involved in the construction.

The CIA video concluded that the construction was complete by April 2007, after which the reactor could have gone operational at any time with sufficient fuel. Hayden noted that the American analysts reviewed potential alternative explanations for the facility, but “the arguments simply didn’t add up.” He stressed that the “foreign partnerships . . . were critical to the final outcome” of the analysis. They were “akin to working together on a complex equation over a long period. Each tries to solve a variable that in turn helps a partner solve another, and so on until we’ve cracked the case. That’s what good intelligence is all about.”

The Israelis supplemented their data with soil and plant samples acquired by an IDF commando mission in August 2007. Soldiers from the Sayeret Matkal, the IDF’s elite commando unit, were covertly flown in by CH-53 helicopters to the Al Kibar region to acquire the samples.

This intelligence collection, and the detection of the Syrian nuclear reactor, represented an unqualified intelligence success. American and Israeli covert operations had successfully tracked Syria’s efforts to develop weapons of mass destruction over two decades. But the interaction between intelligence and policy was more complicated, especially on the American side.

Some press accounts of the reactor episode in Israel and elsewhere emphasize a possible Iranian role in the project. Israeli accounts suggest the Syrian project was funded in part or in full by Tehran, and one says Iran provided $2 billion for the project.

But the CIA’s video and Hayden’s public comments don’t mention Iran, and President Bush’s account of his discussions with Prime Minister Ehud Olmert makes no mention of any Iranian role. Nor did Vice President Dick Cheney’s subsequent accounts suggest involvement by Iran. No Israeli government source has claimed an Iranian role in the Syria project, either, and Israeli government officials normally are not hesitant to discuss Iranian nuclear developments. A senior Israeli intelligence officer directly involved in the operation told me that the evidence does not confirm an Iranian role in or even knowledge of the reactor, although it is always difficult to be definitive about funding sources for secret projects. 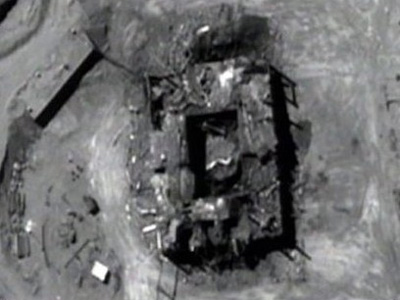