AMERICANS WILL enter voting booths in November fixated on a sputtering domestic economy, but they will exit having elected the single most influential player on the world stage. That reflects a paradox of American power: a generally inward-looking electorate selects a leader with only scant attention to his foreign policies or international experience, and yet that person’s actions undoubtedly will shape the course of global events. And into the center of that paradox walks the enigma that is Mitt Romney.

Given his limited foreign-policy experience and counterpuncher’s strategy of defining himself primarily as what his opponent is not, it’s difficult to know just what Romney’s worldview is. His image as a moderate former Republican governor from the Northeast with a successful background in international business suggests a likely comfort level with the liberal-internationalist or moderate realist traditions of the Republican Party.

Yet as a candidate courting his party’s conservative base, Romney has issued foreign-policy pronouncements with a harder line. He says his administration would align closely with Israel, view Russia as the United States’ primary geostrategic foe and label China as a currency manipulator. The population of terrorist suspects at the Guantánamo Bay military prison might double, and “enhanced interrogation techniques” such as waterboarding could return to the counterterrorism toolbox. A Romney administration purportedly would increase defense spending and bolster rather than shrink the size of the U.S. military. There would be no diplomacy with Iran, which would be enjoined to abandon its nuclear-weapons ambitions or else. U.S. military forces would remain in Afghanistan until the Taliban is defeated decisively.

How Romney would balance such an aggressive foreign-affairs and national-security agenda with his pledge to cut taxes across the board and address a towering debt crisis remains an open question.

In truth, the prism of a presidential-election campaign offers a notoriously unreliable view of America’s role in the world. Through this lens, the lands beyond our shores appear in broad strokes that lack detail and color. There is only black and white, friend and foe, and the president of the United States appears to have the power to magically realign the international landscape. Such a distorted viewfinder is not only imperfect for navigating the shoals of geopolitics but also a poor predictor of any president’s ultimate path.

And yet, if the aperture is widened to include historical context and personal biography, a rigorous campaign may at least suggest the lodestar that a president will follow in charting an unpredictable course. The choice of a candidate provides insights as to which foreign-policy school of thought is ascendant within the party. The background of the candidate and his key foreign-policy and national-security advisers provides further pieces of the puzzle.

In emerging as the Republican nominee for president, Mitt Romney vanquished primary opponents representing venerable strains of GOP thinking. Representative Ron Paul, the libertarian from Texas, was the strongest voice for a more isolationist foreign policy. Former senator Rick Santorum of Pennsylvania gave the most authentic voice to the populist nationalism of the Tea Party movement. Former House Speaker Newt Gingrich most closely aligned with the neoconservatives who were ascendant in George W. Bush’s first term with their staunch support for the Israeli Right and disdain for talking with distasteful adversaries. Gingrich blasted the Obama administration for being “wrong on Iran, wrong on the Muslim Brotherhood [and] wrong on Hezbollah.” Former governor Jon Huntsman of Utah, former ambassador to China, stood in for the realist or liberal-internationalist wing of the party that dominated the George H. W. Bush administration.

Romney must reconcile these competing camps and weave their various policies and rhetorical positions into a coherent foreign-policy narrative. His task is complicated because the old Republican orthodoxy of staunch anticommunism and a strong defense was upended at the Cold War’s end, and George W. Bush’s Iraq invasion still generates controversy and dissention within the party. Beyond that, there are the added challenges of the country’s deep partisan divide and political dysfunction, as well as a shifting global landscape.

Georgetown University’s Charles Kupchan notes that “the old Cold War consensus has disappeared,” which has put the Republican Party in “a period of great turmoil in terms of its foreign policy.” Kupchan, author of No One’s World: The West, the Rising Rest, and the Coming Global Turn, adds that the country finds itself searching for a proper role “in a world that is changing more fundamentally than at any time since the 1800s.” Thus, the Republican Party is being pulled not only between liberal internationalists and neoconservatives but also by rank-and-file Republicans who identify with the Tea Party and favor a more restrained American role in the world. “After a decade of war, the Great Recession and the growth of a towering deficit, that view resonates with a large number of weary Republican voters,” Kupchan said in an interview. “Meanwhile, we as a country are becoming as polarized on matters of foreign policy as we are on domestic issues, and that hasn’t happened since before World War II.”

TO UNDERSTAND the foreign-policy narrative Mitt Romney is attempting to articulate, it’s important to grasp the threads of foreign-policy thought that he and the campaign are drawing on. In his 2001 book Special Providence: American Foreign Policy and How It Changed the World, historian Walter Russell Mead traced those threads back to their historical antecedents to show that today’s arguments have a venerable history.

Republican realists and liberal internationalists, most notably represented by former stalwarts Henry Kissinger, James Baker, Brent Scowcroft and Colin Powell, harken back to Alexander Hamilton, champion of a strong and internationally engaged federal government. Neoisolationists and libertarians such as Patrick Buchanan and Ron Paul, wary of international entanglements, trace their philosophy to Thomas Jefferson’s belief in small government, states’ rights and the avoidance of “entangling alliances.” Neoconservatives share the idealism of President Woodrow Wilson’s values-based foreign policy and his belief that America has a special calling to fight on behalf of liberty and democracy, though they evince little of Wilson’s deference to international institutions. The Tea Party movement follows in the tradition of Andrew Jackson, the populist champion of “American exceptionalism” who believed in limited government and personified a nationalistic “don’t tread on me” pugnacity.

While the Republican worldview is an amalgam of these philosophies, at different periods in the nation’s history events have conspired to advance some of them over others, at times dramatically reshaping the party’s dominant narrative.

After the horrific carnage of World War I, for instance, Senator Henry Cabot Lodge was so furious at President Woodrow Wilson that he led the fight to block America’s entry into the League of Nations, a precursor of the United Nations. The next year, Republican presidential nominee Warren G. Harding was elected on the rallying cry of a “return to normalcy,” which meant domestic issues and homeland defense over Wilson’s democratic evangelism. By the 1930s, with Franklin D. Roosevelt in the White House and the GOP in the opposition, “normalcy” for Republicans meant support for the Neutrality Act of 1935, designed to keep the United States out of war in Europe.

The 1952 presidential election of Republican Dwight D. Eisenhower, with the Cold War in full swing, elevated the realists and internationalists, setting the Republican Party back on the path of American engagement and global leadership. A bipartisan Cold War consensus had emerged in support of an outsized American role in countering communism around the world. Nearly all of the post–World War II building blocks designed to undergird the “American Century” passed with bipartisan congressional support—creation of the United Nations and NATO; establishment of the World Bank and International Monetary Fund; and passage of the Marshall Plan for the rebuilding of Europe.

President Richard Nixon’s administration was another high-water line for the realists, revealed in his ideologically flexible outreach to Communist China. Nixon’s top foreign-policy hand, Henry Kissinger, first national-security adviser and then secretary of state, was an über-realist who believed in a carefully maintained balance of power among global powers. That view held that it was in the United States’ interest to gain legitimacy by leading through the architecture of multilateral institutions, alliances and treaties that the nation so painstakingly constructed after World War II. Given the obvious advantages that accrued to the United States under that system, the realists naturally embraced a status quo worldview that prized stability.

But Democrats, traumatized by the Vietnam War and energized by the antiwar movement, entered into their own isolationist phase during the 1970s, characterized by presidential candidate George McGovern’s “Come Home, America” platform in 1972 and President Jimmy Carter’s defense cutbacks and threats to pull U.S. troops out of South Korea. But after the humiliation of the Iranian hostage crisis and the Soviet invasion of Afghanistan, the pendulum of politics began to swing in a new direction that would rewrite the Republican narrative.

AFTER A decade of trauma—defeat in Vietnam, Watergate, the Arab oil embargo, hyperinflation, Soviet expansionism and the Iranian hostage crisis—Ronald Reagan’s 1980 election heralded another inflection point for Republican foreign policy. Reagan’s administration included a number of senior officials comfortable in the realist wing of the party, including Secretary of State George Shultz and Secretary of Defense Caspar Weinberger. 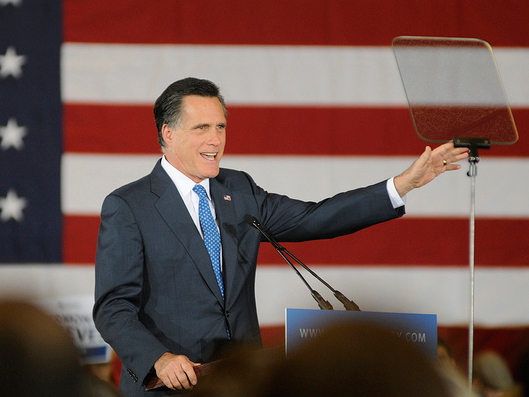 Pullquote: To understand the foreign-policy narrative Mitt Romney is attempting to articulate, it’s important to grasp the threads of foreign-policy thought that he and the campaign are drawing on.Essay Types: Essay