SHOULD SYRIAN president Bashar al-Assad fall, Syria’s problems will have only just begun. With the dictator gone, crime, score settling and a violent contest for power likely will ensue, keeping the streets unsafe and the people afraid. Iran, foreign jihadists and Syria’s neighbors may meddle to protect their interests or stir up trouble. Assad kept Syria’s rival communities in check through force, but his reign created underlying schisms. Now, the civil war has generated new ones. It also has turned the country’s economy, always struggling, into a disaster area. So far the splintered Syrian opposition has shown no skill in reassuring Syria’s minorities, and any new government’s initial legitimacy is likely to be weak.

Unlike other Arab Spring conflicts that have resulted in regime capitulation (Tunisia, Egypt and Yemen) or regime decapitation (Libya), the long and bloody Syrian conflict is likely to generate a failed state requiring the kind of large-scale reconstruction efforts seen in Iraq and Afghanistan. Inevitably, some will call for America to step in to establish order. The United States has a long and rather ugly record in trying to help countries in Syria’s position. True, in Iraq and Afghanistan the United States has gained hard experience in the dos and (mostly) don’ts of state building. But the lessons from these and other state-building efforts suggest success requires considerable resources, excellent coordination within the government, long-term follow-through and serious planning for the postconflict period even as the war is being waged. None of these is likely to be present for any U.S. effort in a post-Assad Syria, given the current political and operational environment.

We argue here that the United States and its allies are unlikely to overcome Syria’s myriad problems and establish a peaceful, stable and democratic Syria. The likely lack of resources, poor governmental coordination and the sheer scale of Syria’s problems probably would spell failure for any ambitious efforts. Moreover, regime-change initiatives could backfire and complicate postregime plans.

Thus, going in small may be the best we can manage. The results also would be small, but being present in some capacity would offer the United States more credibility in supporting regional democracy, greater legitimacy to weigh in on key regional issues and a better strategic position to counter potential threats to U.S. interests. Still, Washington should prepare not only for a limited state-building mission but also for the possible failure of state building in Syria.

This article has four sections. First, we detail the problems Syria is likely to face should Assad fall. Next, we review the potentialrole of outsiders such as the United States in ameliorating these difficulties. Third, we discuss actual U.S. and allied capabilities and their likely problems and limits. Finally, we offer recommendations for a limited engagement in Syria and assess the probable impact of such an engagement.

ASSAD HAS ruled Syria by brute force: he hollowed out the country’s institutions, making a mockery of political parties, the judiciary, the media and other core parts of a functioning state. Now the civil war has destroyed cities and turned Syrian against Syrian. It follows that bringing peace to Syria involves more than toppling Assad; any new regime must also rebuild the state and mend the nation.

The current antiregime violence could morph into chaos or a new power struggle among the anti-Assad victors. The Syrian opposition is famously disunited. Despite having its back against the wall in the anti-Assad struggle, and foreign encouragement to unify, the opposition remains divided by region, ethnicity and political ambitions. No Nelson Mandela of South Africa or Daw Aung San Suu Kyi of Myanmar unites the rebels. Once Assad goes, these groups may come together through a democratic process, but it is far more likely that any near-term elections would be dubious affairs and that at least some of those fighting Assad would turn their guns on each other.

Assad’s divide-and-rule methods and favoritism toward key groups will make continued strife even more likely. Favored minorities, particularly the Alawites but also the Christians and Druze, will want to keep what they have. Poorer, disempowered Sunni Muslims, who are doing the bulk of the fighting (and dying) and comprise the largest community in Syria, will want more power and wealth. Score settling against regime servants is likely to commence almost immediately. Just as the Assad regime has mobilized the Alawites in militias to murder other communities, opposition forces will want payback. If a new government reflects the will of the majority of Syrians, it may openly discriminate against Alawites and other minorities and exclude those Sunnis, small in number but powerful, who cooperated with Assad.

In Iraq after Saddam Hussein fell, crime—even more than political violence—led to national collapse. Similarly, in Syria armed gangs masquerading as freedom fighters capture wealthy and middle-class citizens, demanding ransom or bribes before freeing them. One Aleppo resident told the New York Times, “Chaos, lawlessness, fear, it is just so chaotic, and with all the thugs in the streets, you never know who might kidnap you and ask for a ransom.” Such problems may grow exponentially as Syria’s police, tainted by their association with Assad, will likely prove incapable of enforcing order and preventing massive looting or other crime.

Recent figures from the Quilliam Foundation estimate that the Syrian war also has attracted several hundred foreign jihadists, whose ideology is akin to that of Al Qaeda. Some (no one knows how many) owe their loyalty to Al Qaeda leader Ayman al-Zawahiri or to Al Qaeda of Iraq. These fighters want an Islamic state in the parts of Syria they control, and they will try to sway or coerce Syrians into joining their group. As former CIA official and terrorism analyst Bruce Riedel points out, “Look at Iraq, where we decimated them time and again. They’re still there.” Syria may go from importing terrorists to exporting them, with Al Qaeda and other groups using territory they control to launch attacks on neighboring states and perhaps even Western targets outside the region. Already, Assad partisans and their enemies conduct attacks in Lebanon against one another, and this violence may grow as parties jockey for power in Syria. Compounding these fears, the Washington Post reports that Syria has at least several hundred tons of chemical weapons dispersed across roughly fifty towns and cities. Israel fears they might fall into the hands of Hezbollah, and the world fears Al Qaeda and other jihadist groups might acquire them.

Foreign states likely will continue to meddle in Syria. Saudi Arabia and Turkey not only want Assad out but also want their favored Syrian groups to replace him. Meanwhile, Iran will want to retain at least a toehold of influence even if Assad falls and will support Alawite rejectionists and others willing to do Tehran’s bidding. Some states will fear instability while others will see it as an opportunity. Large refugee populations may fear returning home or not have homes to return to, adding to the concerns of neighboring states bearing the brunt of the ongoing refugee flow.

The war’s devastation, the surge in crime, the risk of political violence and the overall civic uncertainty will make Syria’s economy a basket case. All this will worsen the country’s political problems. Even before the violence, Syria ranked 151st in GDP per capita. It clearly has fallen even further. Foreign investment, always scarce, will be scarcer.

Many of these post-Assad problems have become more likely because of present regime-change efforts. Numerous sanctions have helped speed Syria’s economic implosion. They have devastated Syria’s middle class and rendered the black market as vital as the legitimate economy. It took nearly a decade following the Iraq invasion to rebuild that economy, and it required tremendous U.S. investments, even with Iraq’s massive oil resources. Layers of sanctions are also difficult to roll back quickly. In Libya, it took months after Muammar el-Qaddafi’s fall for the UN, EU and United States to unfreeze assets from Libyan banks and Qaddafi’s former inner circle.

Arms flooding into Syria also will confound stabilization efforts. In 2011, before the fighting began, Syria had a strong military, effective police, and a cowed and unarmed population. After Assad falls, the security forces will be weak and devastated, while popular groups will be well armed and emboldened. It is uncertain if weapons will stay in the hands that received them or even remain in Syria. A poorly secured cache of weaponry in Libya, including man-portable surface-to-air missiles, made its way out of the country to Al Qaeda in the Islamic Maghreb, according to news reports.

IN THEORY, outsiders could help Syria maintain the security of its borders, assist with internal security, provide economic aid, encourage democratization, and otherwise assist Syria in its efforts to go from war, chaos and tyranny to peace, stability and democracy.

Syria’s borders are porous, and they may grow more so if the Syrian army deteriorates further. Refugees flow out while fighters, arms and terrorists flow in. Even before the latest conflict, smuggling was common between Syria and Lebanon and between Syria and Iraq. In Iraq after Saddam Hussein, jihadists entered from Syria, Saudi Arabia and beyond, while Iran sent in hundreds of paramilitary and intelligence personnel. All made a bad situation worse. By policing borders, foreign forces could reduce the scale of neighboring states’ meddling, making it harder for them to send arms and paramilitary forces to Syria. Jihadists could be stopped at the border and arrested or perhaps deterred from entering Syria at all. 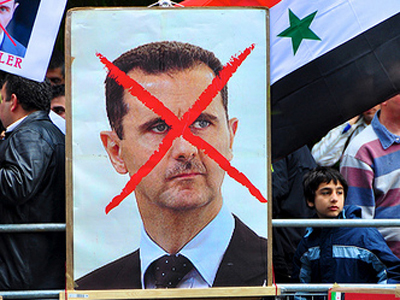