IN THE genteel world of international financial diplomacy characterized by staid summits and staged photo ops, martial metaphors are out of place. So in October, when Brazilian Finance Minister Guido Mantega warned of an impending “currency war,” he duly shocked the financial world. The United States, Britain, Switzerland and Japan, Mantega complained, were all simultaneously attempting to push down their currencies in an effort to export their way out of their economic doldrums. Their policies were in obvious conflict, since not every country can weaken its exchange rate against the others. This was a zero-sum game that could only come to grief.

Moreover, these policies came at the expense of emerging markets, which would see their exchange rates rise and thus the price of their exports increase to uncompetitive levels as a result of the tsunami of capital now flooding into their markets as investors tried to find better returns than those offered by the West. Developing nations would be forced to meet fire with fire. Their governments would be compelled to slap on controls to prevent financial capital from flowing in. They would impose taxes on foreigners seeking to buy their stocks, bonds and other securities. Their central banks would have no choice but to intervene in the foreign-exchange market to prevent their currencies from rising.

Then in November, when the U.S. Federal Reserve decided to launch a second round of quantitative easing, purchasing Treasury bonds with the goal of supporting employment growth and stamping out deflation, this drumbeat of criticism came to focus almost entirely on the United States. The Fed purchasing $600 billion of U.S. Treasury securities, investors concluded, would mean still lower Treasury yields and a weaker dollar. There would be even-larger financial flows to emerging markets, and it would be harder for a struggling Europe and Japan to increase their exports.

Officials in Europe and Asia joined Mantega, criticizing Washington for attempting to solve its problems at the expense of other countries. German Minister of Finance Wolfgang Schauble, in the sort of pointed language one rarely hears among allies, characterized U.S. policy as “clueless.” When President Barack Obama arrived in South Korea in mid-November for the G-20 summit hoping to triumphantly conclude a yearlong negotiation over currencies and trade, he found himself isolated not only from emerging markets but also from his supposed European friends.

U.S. policy makers, for their part, maintained that the Fed was simply pursuing its dual mandate of stable inflation and full employment. If that pursuit implied a weaker dollar, then so be it, but manipulating the currency, they assured everyone within earshot, was not their intent. They saw the responses of emerging markets, led by China, as only frustrating a necessary currency adjustment. Responding to accusations that the United States had engaged in competitive devaluation of the dollar, Treasury Secretary Timothy Geithner in turn accused emerging markets of “competitive nonappreciation”—of refusing to increase the value of their currencies in order to keep their goods cheap in foreign markets.

At this point, what had started as a war of words showed signs of escalating. That Congress will retaliate with “exchange dumping” tariffs on Chinese exports (increasing duties on the low-priced products “dumped” on the American market) is a real possibility—in which case China will respond in kind. The result would be an economic and financial war of attrition that no one can win. Among the likely casualties: free trade and investment. It is not too much to say that globalization hangs in the balance.

HOW HAVE we gotten into this fine mess, one might ask. Just as the origins of the Second World War cannot be understood in isolation from the First World War and the Treaty of Versailles signed at its conclusion, the current international currency war cannot be understood in isolation from the monetary conflicts and agreements that preceded it. Our story begins not in the seat of royal power outside Paris, however, but in the leafy resort town of Bretton Woods, New Hampshire. There in 1944, while World War II still raged, forty-four nations met to shape the postwar monetary world. They saw the uncoordinated currency devaluations that started with Great Britain’s abandonment of the gold standard in 1931 and economic nationalism (proliferation of tariffs, quotas and exchange controls) more generally as having fanned the tensions that exploded into World War II. In the future, they agreed, similar problems had to be avoided at all costs.

To this end, they decided to create a system of pegged exchange rates in which every country declared a par value for its currency against the dollar or gold. They created the International Monetary Fund to monitor the compliance of countries with their currency commitments. While private purchases and sales of currencies for trade-related purposes were to be freely permitted, financial transactions would be controlled to prevent financial instability like that which had brought down the global monetary and financial system in the 1930s.

The assembled worthies congratulated themselves on their achievement. Because they had successfully suppressed destabilizing capital flows, they reassured themselves, exchange rates would settle down. This in turn would provide a stable basis for rebuilding the world’s trade, including that of the United States.

The Bretton Woods agreement did, however, have one significant weakness. It included no way of compelling a country running chronic export surpluses to revalue its currency. The British delegation, led by the renowned economist John Maynard Keynes, had advocated the adoption of such a mechanism. Specifically, Keynes suggested that the IMF should be empowered to tax the international reserves of a chronic surplus country that failed to adjust its policies.

But the United States, emerging from the war in a position of economic strength, understood that its balance of payments would be strong for some time, making it the likely target of such measures. American officials therefore vetoed Keynes’s proposal. The irony, of course, is that this decision came back to haunt America six decades later, once China assumed the role of chronic surplus country and there was no legitimate international sanction to compel it to adjust its currency.

BRETTON WOODS was always doomed to fail eventually. For a quarter of a century after World War II, the system served the world well, but it had inherent flaws. The country at its center, the United States, starting from a position of strength, could afford to adopt a posture of benign neglect toward its exchange rate. It could leave to other countries the decision of how much their currencies would be worth in terms of dollars. Europe and Japan chose to peg at low levels that enhanced the competitiveness of their exports. Emerging from World War II with lower incomes and therefore lower labor costs than the United States, they pursued policies of export-led growth. And successful these policies were: competitive currencies translating into competitive manufacturing sectors enabled Europe and Japan to export their way to higher wages.

On this basis, the war-torn economies gradually closed the gap in incomes and manufacturing productivity vis-à-vis the United States. And as they did so, America moved from a position of external strength to one of weakness, financing its balance-of-payments deficits with dollars that foreign central banks and governments happily accepted, interested as they were in augmenting their buffer stocks of international reserves. With the European and Japanese economies expanding strongly and the United States comfortably living beyond its means, this was a happy situation all around.

By the late 1960s, however, the system constructed at Bretton Woods was coming under strain. With the Old World back on its feet, European critics of prevailing dollar-centric arrangements increasingly complained about the “exorbitant privilege” enjoyed by a United States permitted to maintain artificially high consumption standards at foreign expense. The flowery language was that of then–French President Charles de Gaulle and his finance minister, Valéry Giscard d’Estaing, but the sentiment was widely shared.

America’s policies did nothing to reassure the country’s foreign critics; instead, conditions in the United States grew increasingly inflationary as Washington pursued an ambitious social agenda and simultaneously got bogged down in a costly Vietnam War. The Nixon administration grew frustrated over the inability of the United States to adjust the value of the dollar so as to enhance the competitiveness of U.S. exports—something that was impossible so long as other countries unilaterally pegged to the greenback. Financial markets meanwhile found more ways around the measures taken by policy makers to limit capital flows. This in turn made it more difficult to stem the imbalances building up in the system.

PRESSURE ON the dollar-centric Bretton Woods structure grew increasingly intense. Following the failure of a series of half measures designed to combat U.S. inflation as well as stave off foreign investors’ lack of confidence both in the dollar and in Washington’s ability to pay back those dollars in gold, in early 1973 it all came crashing down. The dollar, the yen and the major European currencies have been floating ever since.

In contrast, developing countries from Latin America to East Asia continued to peg to the dollar or, less commonly, to other advanced-country currencies. To be sure, it took them a while to figure out how to adapt other policies so that their currency pegs would stick. Until they did, they stumbled from one financial crisis and forced devaluation to another. The overarching lesson these nations had to learn: making a currency peg hold requires subordinating monetary, fiscal and financial policies to that overarching goal. 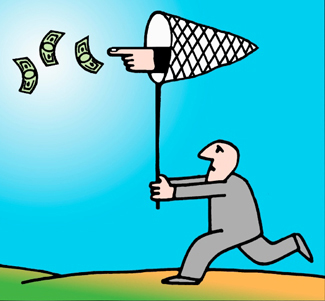