Second, sustained economic growth based on productivity gains is only one part of the solution as China ages. The other is to ensure that across-the-board household incomes increase at least as rapidly as overall GDP growth. In other words, there needs to be a massive transfer of assets and opportunity from the state-owned sector toward the private sector in order to raise significantly household wealth and income. This also would help the economy transition toward more domestic consumption, a necessary development for sustained growth.

Significantly increasing household income and total factor productivity (TFP), meaning getting more output from capital and labor, will require a winding back of SOE wealth and opportunity—and, by implication, the role of the Communist Party in the Chinese economy.

For example, land reforms in the early 1980s allowed plot holders to produce whatever they wanted after meeting minimum quotas and selling surplus produce at market prices. This led to the rise of “township and village enterprises,” a spontaneous and unplanned explosion of community-led small industry. Although these were technically owned by local governments, they were run by private households that were allowed to keep most of the profits. Importantly, household incomes during this decade of Chinese rural entrepreneurialism rose at rates that corresponded with GDP growth. This period actually witnessed the effective retreat of the state in economic activity, and four-fifths of the poverty elimination that has occurred since 1980 was achieved during this first decade.

But then the state reclaimed much greater dominance over the economy in the aftermath of the countrywide protests in 1989, which led to the Tiananmen Square violence. The regime realized it faced a peril in becoming irrelevant to rising new elites, and the Communist Party thus decided it must remain the dominant dispenser of career, business, professional and even social opportunity. Thus did it tie the future of various elites to that of the party. The SOEs were returned to a dominant role in the economy, as evidenced by the nature of the current Chinese economy.

The problem is that the vast majority of Chinese SOEs don’t perform well in comparison with private firms. That’s because they are fed on easy diets of cheap and below-market credit rates as well as tax and subsidy privileges, and they are shielded from having to compete with domestic and international private firms. Thus, they thrive in a corporate culture and economic setting in which commercial success often is based more on political connection and maneuvering than on economic efficiency and innovation. Studies show that even China’s largest and most efficient SOEs perform two to three times worse than domestic private Chinese firms on measures such as profitability, return on assets, return on equity, return on sales and TFP. Remember that these are the same SOEs that receive three-quarters of the country’s on-the-books bank loans, otherwise referred to as formal finance. In contrast, domestic private firms are frequently forced to borrow from the “shadow” banking sector at rates that are at least four or five times higher than for formal loans.

To drastically raise both household incomes and TFP—and to avoid potential social catastrophe as the country ages—Beijing will need to oversee the massive and rapid transfer of national wealth from the state-corporate sector to the private and household sector. Options include a major SOE privatization drive, although such policies will be pointless if well-connected families are allowed to snap up shares in SOEs, as occurred during the 1990s and earlier this decade.

Forcing state-owned banks to lend on merit rather than on policy and political considerations will allow millions of private firms to prosper based on business acumen (at the expense of less efficient SOEs). That in turn will help ensure that families operating in this fair economic environment can acquire enough wealth over time to look after themselves when family members reach retirement age.

However sound these reforms may be in economic and social terms, the country’s current elites aren’t likely to welcome them, given that SOE dominance and the Communist Party’s command over privilege and largesse distribution are seen as essential to regime survival and the standing of the elites. It’s important to note that the three most senior positions within an SOE (chairman, president and party secretary) are all directly appointed by the Communist Party’s Central Organization Department. Further, there is an identifiable “princeling”—one of the two dominant factions within the CCP—in at least one of the top three positions in all but one of the largest seventy SOEs. It is also questionable whether provincial and local officials who depend on SOEs for power, relevance and revenue will agree to any genuine privatization policies.

Finally, China’s looming inability to handle its aging demographics is reflected in the historical reality that, unlike China, all advanced economies grew rich before they grew old. Large advances in productivity and innovation, prerequisites of ongoing economic growth, are extremely difficult to achieve in poor and aging societies—particularly in countries that lack sound rule-of-law principles, intellectual-property rights and allocation of capital based on merit rather than political connection. Across all economies, productivity and innovation (alongside adequate and effective investment in human capital such as education) tend to come primarily from workers in their thirties and forties. Thus, even if China were to increase its retirement age from sixty to sixty-five or higher, productivity and innovation gains would be relatively slight.

MODERN CHINA is a rich and strong state overseeing a weak country and poor people. This means that the resources available to Communist Party members are fueling China’s rise as a formidable strategic player with impressive capabilities. But as China grows, so too does its domestic vulnerability, confirmed by worsening governmental corruption and domestic discontent that is growing more rapidly than the economy.

From the Communist Party’s point of view, it has no good options vis-à-vis the country’s aging future. Meaningful economic reforms that would enhance the capacity of Chinese households to provide for themselves in retirement would severely dilute the economic relevance of the CCP. They also could cause an immediate and dramatic decline in output during the transition, with unpredictable consequences for regime security. But failure to pursue such economic reforms will endanger the sustainability of overall economic growth, worsen the national capacity to meet the challenges of an aging society and increase the already-serious domestic vulnerabilities faced by China’s rulers. Either approach will increase the “existential anxiety” of the regime, a term used by my colleague Linda Jakobson of the Lowy Institute in Sydney.

China also faces difficult fiscal decisions. Currently, it devotes a large share of government finances to enhancing Chinese national power and influence through double-digit spending increases for its military, the People’s Liberation Army (PLA), and its paramilitary, the People’s Armed Police (PAP). Although the economic and social problems emanating from the country’s aging crisis will not be pressing for at least a decade, major decisions affecting the country’s ability to meet that crisis will need to be made by the next generation of leaders. Whatever decisions are made, the impact on the CCP’s fiscal and other commitments will be profound.

For example, the average sixty-five-year-old in urban China currently depends on the state for around 60 percent of his income, with about 27 percent coming from family transfers and the rest from labor income. In rural China, home for more than half of those sixty-five years and over, the state only provides about 5 percent of their income, with 45 percent coming from labor and 50 percent from family transfers. As retirees approach seventy years and over in both urban and rural China, the share of income from labor declines steeply as they become physically less able to work. Yet, the state picks up a declining share of the income needs in both urban and rural China, with family transfers and savings making up the difference. The reality is that the state will need to increase significantly its burden of providing income for retirees (especially in rural China) as the population ages and the capacity of children to bear the financial burden of their aging parents is strained.

China will also have to raise welfare spending appreciably to avoid social catastrophe. Currently, state and local governments spend around $96 billion on public health, including insurance programs, an increase from about $30 billion in 2007. Even so, more than half of all medical costs are individually borne by citizens in urban areas; in rural settings it is more than 75 percent. In a 2011 budget of around $887 billion, at least $205 billion was spent on the PLA and PAP. The true figure for the latter was probably closer to $300 billion. As China ages, an increasing amount of resources presently devoted to enhancing national power and prestige will need to be diverted toward improving the lot of its own people.

China’s demographic and economic challenges can be seen in an intriguing statistical projection comparing China with the United States in one significant area. In 2025, China’s population will be about 3.2 times that of the United States. By 2050, it is projected to fall to only about 2.2 times the size of the U.S. population. This profound population decline, in real terms and in relation to other great powers, confronts China with serious economic, political, cultural and social threats. The question is whether the country can successfully counter those threats and fulfill its current ambitions for economic growth, social stability, and expanding regional and global influence. The odds may not be great that China will manage to remain on its current course and dominate what many analysts see as the coming Asian century. 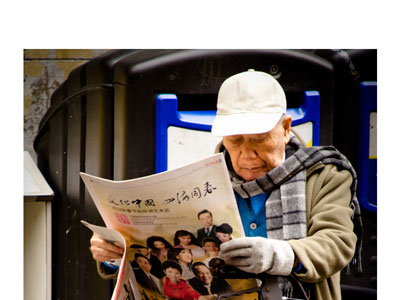