THE DECLARATION of Independence is a little odd. It claims not only that all people are created equal but also that they have a self-evident, God-given right to the pursuit of happiness. If it is indeed self-evident, why did no one even mention it until 1776? God did not guarantee anyone the right to pursue happiness in the sermons of Plymouth Colony Governor William Bradford or the great Puritan ministers Cotton Mather and Jonathan Edwards, and it is impossible to imagine any of those stern preachers arguing its merits. Just read the gruesome text of Edwards’s sermon “Sinners in the Hands of an Angry God,” and you’ll agree. The challenge there is to avoid the everlasting torments of hell; Edwards certainly does not think that you’ll escape them by spending your days on earth chasing after happiness.

Implausible as the declaration is, however, at least in this respect, the members of the Continental Congress accepted and signed it. Then the Continental army fought its way to victory, turning independence from assertion into reality. Now that the Americans were free of Britain, what would be the relationship between this right to pursue happiness and the God who had given it to them? On the whole, it was positive. In the decades after the Revolution, growing numbers of Americans attended revivals, joined churches, founded new denominations and blended godly fervor with the pursuit of their worldly goals.

No one made them go to church; the First Amendment guaranteed religious liberty, forestalling the creation of a national religion. Even states that still had established churches in 1783, including Massachusetts, Connecticut and New Hampshire, soon got rid of them. Lyman Beecher, a famous Connecticut preacher, was horrified when his state disestablished the Protestant Congregational Church in 1818, fearing that religion would go into a decline: “It was as dark a day as I ever saw.” Later he completely changed his mind, as the advantages of having religion free from state interference became clear: “They say ministers have lost their influence; the fact is, they have gained.” And why was that? “By voluntary efforts, societies, missions, and revivals, they exert a deeper influence than ever they could by queues, and shoe-buckles, and cocked hats, and gold-headed canes.”

Beecher realized, in other words, that religion was no longer contaminated by being linked to a social elite or to politicians. It could not lean on government and had to pull its own weight, but it no longer risked being compromised by the grimy side of politics. In our own time, the historian R. Laurence Moore made the same point in an elegant book, Selling God (1994), in which he argued that religion quickly became subject to the forces of market competition. Just as in the economy, where each American entrepreneur had to offer a commodity or product that others wanted if he hoped to survive, so in the religious “marketplace” each denomination now had to attract members and persuade them to pay voluntarily for their ministers’ upkeep. There was as much of a free market in religion as there was in grain, cotton or shoes.

The system worked incredibly well, but it did lead to a shift in power from “producers” to “consumers.” Ministers knew that their livelihoods depended on their ability to offer what their congregations wanted. It is striking to see how, under these conditions, their theology began to change, becoming steadily less menacing and more comforting with the passing decades. The God they offered really did seem to be more interested in the pursuit of happiness than in fire and brimstone.

This theological change, to be sure, did not come overnight. Lyman Beecher himself, for all his understanding of how the Church might benefit from disestablishment, remained an uncompromising Calvinist. When his daughter Catharine’s fiancé, Alexander Fisher, drowned in a shipwreck in 1823, he wrote her a letter saying that not only was the young man dead, but that his soul was condemned to everlasting torment. By our standards, it is just about as heartless and insensitive a letter as a parent could possibly send to his bereaved child. But within a single generation, the harshest elements of Calvinism started to disappear. Catharine, her sister Harriet Beecher Stowe and their brother Henry Ward Beecher dropped the nasty doctrine and preached a far-more-comforting, sentimental, domestic brand of Christianity. Catharine went on to become a pioneer in education. Harriet’s book Uncle Tom’s Cabin (1852) was among the nineteenth century’s most popular and influential works, while Henry, with a well-endowed pulpit in Brooklyn, became the most famous preacher of his day. Each of them had more to say about love and charity than about the threat of damnation.

The decline of hell and of Calvinist predestination were accompanied by a new interest in Jesus. Before 1800, Jesus had been important mainly as the second person of the Trinity, whose sacrificial death and resurrection atoned for the sins of mankind. After about 1830, Americans began to write biographies of Jesus and to depict the events of his life as equally important as those of his death and resurrection. These biographies, moreover, showed him to be a friendly, comforting, domestic sort of fellow, a working carpenter with his bag of tools and a kind word for every neighbor. Right on schedule, in 1855, the poet Joseph Scriven wrote the hymn “What a Friend We Have in Jesus.” Authors like Elizabeth Stuart Phelps also began publishing fiction about heaven (her book The Gates Ajar was a best seller in 1868) that made paradise sound just like middle-class Victorian life but with all the bad parts left out. Everyone was happy there, and she gave no indication that anyone might be sent to The Other Place.

AS RELIGION partnered with happiness in America, enfranchising the vast majority of the population and losing many of its sharp edges, something quite different was happening in Britain. From decade to decade, attendance at Anglican services was shrinking. Growing numbers of Britons, especially in the new industrial cities, lost interest in religion altogether. Periodic revivals checked and temporarily reversed the decline, but they could not alter the long-term trend.

Historians have speculated about this Anglo-American contrast, which persisted throughout the nineteenth century and into the twentieth. Most of them agree that the disestablishment of churches in America promoted religious health, whereas the continuation of an established church in Britain contributed to religious anemia. Anyone who became dissatisfied with the government was likely to fall out with the Church of England as well, it being a branch of the state. Where Americans dissatisfied with the political status quo could often draw strength from their religious communities, Britons were more likely to see government and church as, jointly, the source of their troubles. British clergy, exempted from the market environment that challenged their American counterparts to preach brightly and energetically, dozed and mumbled their way through the Book of Common Prayer.

The religious novels of Anthony Trollope, beginning with The Warden (1855) and Barchester Towers (1857), offer an evocative and entertaining portrait of Anglican life in the middle years of the nineteenth century. They depict a clergy deeply preoccupied with politics, with property, and with the scramble for advancement and rich benefices. Archdeacon Theophilus Grantly, a central figure in the series, always has one eye on the composition of the government. He fights like a tiger, not to spread the Gospel, but to protect church property and privileges. His father-in-law, Septimus Harding, is less venal and much more lovable, but also depends on a corrupt and decadent system for his livelihood. Harding would not last a moment in the competitive world of American ministers and evangelists. These novels describe magnificently the Church’s simultaneous complacency, beauty and vulnerability to attack.

Certainly it was still powerful. It exacted tithes from everyone, whether they were Anglicans or not, and levied “recusancy” fines on people who stayed away from church. It could still inaugurate prosecutions for blasphemy and heresy into the mid-nineteenth century. The bishops sat in the House of Lords and were politically influential figures, while the Church itself was immensely wealthy, one of the nation’s biggest landowners. Until 1829 only Anglicans could attend the universities of Oxford and Cambridge, only Anglicans could be judges and magistrates, and only Anglicans could sit in Parliament.

In other respects, however, the Church of England was weak. For one thing, it had long permitted “occasional conformity,” allowing Baptists, Quakers, Congregationalists, Presbyterians, Methodists and other non-Anglican Protestants to be regarded as Anglicans if they were willing to attend Holy Communion in an Anglican church just once each year. The Tory party had tried to put a stop to the practice in 1711 with the Occasional Conformity Act, but the Whigs found clever nonconformists too useful to do without and repealed the act when they were back in power a few years later. Moreover, a state church has an obvious incentive to keep as many people inside as possible, whatever their views.

Even on doctrine the Church of England had no strong and clear stance. Its version of a written constitution, the Thirty-Nine Articles, was deliberately vague on the most controversial issues of the Reformation: the real presence of Christ’s body and blood at Holy Communion; apostolic succession (the passing down of divine authority since St. Peter); the number and nature of sacraments; the invocation of saints; and the relationship between faith and good works in obtaining God’s favor. It could not even agree on whether it was really a Protestant church. Anglicans each week continued to declare in the creed that they belonged to “one holy, catholic and apostolic church.” A prominent Church of England priest, John Henry Newman, created a scandal in 1841 by arguing that the Thirty-Nine Articles could be read in such a way as to establish the essential compatibility of Anglicanism and Catholicism. 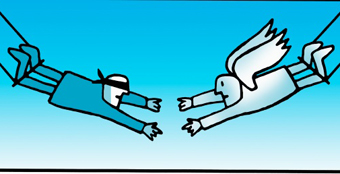