AS THE debate over America’s Afghan troop withdrawal grinds on, it’s time to consider the lesson of Richard Nixon, whose Watergate abasement obscures the reality that he has more to teach us on such matters than is generally recognized. The country could use some of Nixon’s strategic acumen these days.

This is reflected in the foreign-policy discourse unfolding in response to the Obama administration’s plans to speed up its exit from Afghanistan. It’s essentially a binary debate, simplistic in its terms. Neither President Obama nor his critics look good in this face-off.

The discussion is focused on the simple question of how many troops should be brought home from that troubled land—and when. Obama, seeing little hope of a traditional military victory, wants them out as quickly as he can get them home smoothly and without serious harm to them in the process. His critics argue that this represents a military capitulation, foregoing a victory that would be achievable if the president had sufficient fortitude.

In such narrow terms, Obama has an edge in political and policy logic. But the problem is that he hasn’t spelled out how he plans to execute the withdrawal in a purposeful fashion or how the exit would fit into a broader strategic framework.

True, the country is war-weary. Its volunteer troops are stretched beyond their psychological limit. The public fisc is a mess, in part because of war costs. Strains in the U.S.-Pakistani relationship have reached dangerous proportions. The civilizational tensions between Islam and the West have been heightened by America’s continued presence on Islamic soil. And there’s no reason to believe that Al Qaeda, which precipitated the war with its 9/11 attacks on America, now figures appreciably in the outcome of this war one way or the other.

Thus, Obama is wise to deflect opponents who can’t accept that these realities negate prospects of the victory they foresee if the U.S. military effort were sufficiently robust and long lasting. As neoconservative commentator Gary Schmitt wrote in the Weekly Standard, “In short, the insurgent cancer was going into remission but the White House, irrationally, wants to stop treatment.” But for Schmitt and his allies, there never seems to be any discernible turn of events that could end the treatment. Since the aim is to defeat and subdue Afghanistan’s Taliban—and since the Taliban is an indigenous element of Afghan society that is never going away—the neocon approach leads inexorably to endless war.

That’s why Obama’s exit strategy, along the lines of his carefully calibrated military exit from Iraq, is necessary.

But where’s the strategic context for such a policy? How can America reduce its Afghan footprint while continuing to exercise influence in the area through deft diplomacy backed up by offshore military capability? What nations could help us do that? What new developments are brewing in the region that could be exploited in the effort to maintain stability?

Perhaps such questions are weighing heavily on Obama as he proceeds with his exit strategy, but there’s little evidence of it. Here’s where we should consider the story of Richard Nixon and the Vietnam nightmare he inherited in 1969. His subsequent actions not only got his country out of a poisonous quagmire (and without defeat; that came later) but also transformed the geopolitical landscape of Asia in ways that stabilized the region for decades.

Upon entering the White House, Nixon made a stark calculation: the Vietnam War was not winnable at an acceptable cost. In military terms, this may have been debatable, given the devastation visited upon the Communist opposition during the 1968 Tet Offensive, which cost the Communists thirty-seven thousand men, compared to 2,500 Americans. Even a year later, at Nixon’s inauguration, the Communist main force was still reeling from its 1968 decimation.

But the situation at home precluded any attempt to exploit this temporary enemy weakness militarily. The war was tearing apart a country already raw from recent assassinations of commanding political figures. Campus buildings were being burned and bombed. Urban race riots following the killing of Martin Luther King Jr. raised questions about the country’s essential stability. Hundreds of thousands of antiwar demonstrators were flocking to Washington.

Accordingly, Nixon fashioned a militarily risky and politically dangerous strategy: He ordered a retreat from Vietnam, a slow, methodical withdrawal under enemy fire. He would use the military breathing room from the Communist devastation to bolster the South Vietnamese army so it could pick up the slack. Further, Nixon brought his combat troops home first, ahead of support personnel, in order to reduce casualties and calm the home front. In doing so, he left the remaining support troops vulnerable to the kind of Tet-like Communist offensive that had destroyed the presidency of his predecessor, Lyndon Johnson.

Thus, Nixon placed himself in a predicament of epic proportions. Militarily, he had to calibrate a risky maneuver in Vietnam, which could lead to disaster in the field and also result in political crisis at home. Politically, he had to manage an unstable domestic scene, which could engulf him at home and upset his military calibrations in Vietnam. Wending his way through this thicket, he got all U.S. troops home by the end of his first term.

And yet as this harrowing drama unfolded, Nixon viewed it as merely a sideshow, the necessary cleanup effort that enabled him to pursue simultaneously his broad Asian vision, as reflected in a Foreign Affairs article he wrote in October 1967. Entitled “Asia After Viet Nam,” it foreshadowed a new Cold War strategy based on significant developments in the geopolitics of Asia. These included the growing tensions between China and the Soviet Union; the rise of economically progressive nations in “non-communist Asia,” notably Japan, Hong Kong, Singapore, Taiwan and South Korea; these nations’ lingering concerns about the threat from China; and America’s exhaustion from playing the role of global policeman.

All this posed an opportunity for America to work with these rising Asian nations to fashion a collective regional defense posture against a menacing China while also trying to lure China out of its “angry isolation.” The rising tensions in Sino-Soviet relations provided a promising opening to this new policy. “Taking the long view,” wrote Nixon, “we simply cannot afford to leave China forever outside the family of nations, there to nurture its fantasies, cherish its hates and threaten its neighbors.” The aim, he said, should be to persuade China that it “cannot satisfy its imperial ambitions, and that its own national interest requires a turning away from foreign adventuring and a turning inward toward the solution of its own domestic problems.”

Nixon’s article presaged his later overture to China and also helped prepare China intellectually for that overture when it came. Meanwhile, he believed, it was crucial that he prevent a Communist victory in Vietnam. Otherwise, America’s Asian presence would have been severely attenuated. And without a clear American commitment to the region, the rising non-Communist nations likely wouldn’t have been emboldened to resist the Chinese giant, and China wouldn’t have been emboldened to break decisively with the Soviet Union.

By pulling together Asia’s rising non-Communist states and bringing China into the world as a responsible player, Nixon began a process of bolstering regional stability. He also diminished the prospect that America would be pulled into endless wars in the region. Further, in applying pressure on the Soviets he induced them to show more flexibility in their dealings with the United States. This was brilliant foreign policy with far-reaching, positive and long-lasting consequences.

This kind of strategic thinking is missing from today’s foreign-policy discourse. Obama isn’t pursuing it, and his critics aren’t asking for it. So we get the binary debate focused on how many troops should be left in Afghanistan, and for how long. Obama says not many and not for long; his critics say it should be more, over a longer time span. This is essentially a meaningless debate when considered alongside the big strategic questions regarding the threat of Islamic fundamentalism and how the country can meet it effectively without kindling more anti-Western fervor throughout the world of Islam.

We need the kind of grand strategic vision that Nixon applied to a chaotic Asia four decades ago. It isn’t enough to leave Afghanistan, just as it wasn’t enough for Nixon to execute his harrowing Vietnam retreat. A chaotic world needs U.S. leadership that can take the country beyond simplistic binary debates.

Robert W. Merry is editor of The National Interest and an author of books on American history and foreign policy. His latest book is Where They Stand: The American Presidents in the Eyes of Voters and Historians. 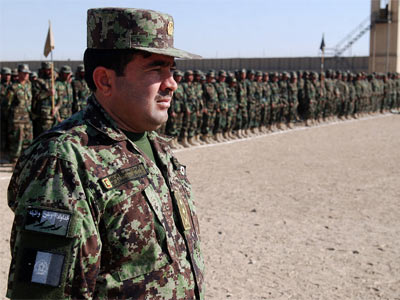 Pullquote: By pulling together Asia’s rising non-Communist states and bringing China into the world as a responsible player, Nixon began a process of bolstering regional stability.Essay Types: The Realist