IN THE late autumn of 1962, there was a short, intense border war between India and China. It resulted in the complete rout of an underprepared and poorly led Indian Army. For the two rising powers, the battle—and its outcome—was seen in national, civilizational and ideological terms. These nations were, or at least saw themselves as, carriers of ancient civilizations that had produced great literature, philosophy, architecture, science and much else, but whose further evolution had been rudely interrupted by Western imperialists. India became free of British rule in 1947; China was united under Communist auspices in 1949. The recovery of their national independence was viewed as the prelude to the reemergence of China and India as major forces in the world.

That debacle at the hands of China still hangs as a huge cloud over Nehru’s reputation. And there is an intriguing comparison to be made here with his fellow Harrovian, Winston Churchill. British historian Robert Rhodes James once wrote a book called Churchill: A Study in Failure, whose narrative stopped at 1939. It excavated, perhaps in excessive detail, its subject’s erratic and undistinguished career before that date. But of course, all Churchill’s failures were redeemed by his heroic leadership in World War II. It is tempting to see Nehru’s career as being Churchill’s in reverse; marked as it was for many decades by achievement and success, these nullified by the one humiliating failure which broke his nation’s morale and broke his own spirit and body. The war began in October 1962; a year and a half later, Nehru was dead.

It is a legacy that still haunts the Sino-Indian relationship.

NEHRU WAS long interested in (and influenced by) China. His prolific writings—books, letters, speeches—reveal much of the man and how he came to be so deeply misled by the threat he (and his country) faced. Nehru saw China at once as peer, comrade and soul mate. His first major book, Glimpses of World History, published in 1934, puts his predilections on full display. It has as many as 134 index references to the Middle Kingdom. These refer to, among other things, different dynasties (the Tang, Han, Qin, etc), corruption, Communism, civil war, agriculture and banditry. Already, the pairing of China and India was strongly imprinted in Nehru’s framework. Thus China is referred to as “the other great country of Asia” and as “India’s old-time friend.” There was a manifest sympathy with its troubles at the hands of foreigners. The British were savaged for forcing humiliating treaties and opium down the throats of the Chinese, this being an illustration of the “growing arrogance and interference by the western Powers.”

In all his pre-1947 writings, Nehru saw China from the lens of a progressive anti-imperialist, from which perspective India and China were akin and alike, simultaneously fighting Western control as well as feudal remnants in their own societies. Chiang Kai-shek and company, like Nehru and company, were at once freedom fighters, national unifiers and social modernizers. It stood to reason that, when finally rid of foreign domination, the two neighbors would be friends and partners.

In the spring of 1947, with India’s freedom imminent, Nehru organized the Asian Relations Conference in New Delhi. Representatives of Asian nations already free or struggling for independence from European rulers were in attendance. There, Nehru called China “that great country to which Asia owes so much and from which so much is expected.” The conference itself he characterized as

an expression of that deeper urge of the mind and spirit of Asia which has persisted in spite of the isolationism which grew up during the years of European domination. As that domination goes, the walls that surrounded us fall down and we look at each other again and meet as old friends long parted.

Nehru believed that the fundamental areas of disagreement between India and China could be bridged; in particular, the unresolved detritus of the imperialist era that largely centered on Tibet. For back in 1913–14, a meeting was held in the British imperial summer capital, Shimla, convened by the government of India and attended by Chinese and Tibetan representatives (Tibet was by then enjoying a period of substantial, indeed near-complete, political autonomy from Chinese overlordship). Here the McMahon Line (which sought to demarcate the frontiers of British India) was drawn. When India became independent in 1947 it recognized this boundary, which largely followed the path of the Himalaya, and adopted it as its own. By this, Nehru and his government thought that the border between India and China, determined at the Shimla Conference, had been reaffirmed.

Even when the Communists took power on the mainland in 1949 and began to voice their reservations about the McMahon Line, the prime minister continued to give Beijing the benefit of the doubt. So did other influential Indians. The ambassador to China, K. M. Panikkar, was greatly impressed by the new ruler, comparing Mao Tse-tung to his own boss, Nehru. Both, he claimed—or fantasized—“are men of action with dreamy, idealistic temperaments,” both “humanists in the broadest sense of the term.”

In October 1950, China invaded Tibet. Now, the home minister, Vallabhbhai Patel, in a show of realism, wrote to Nehru that

Communism is no shield against imperialism and that the Communists are as good or as bad imperialists as any other. Chinese ambitions in this respect not only cover the Himalayan slopes on our side but also include important parts of Assam. . . . Chinese irredentism and Communist imperialism are different from the expansionism or imperialism of the Western Powers. The former has a cloak of ideology which makes it ten times more dangerous. In the guise of ideological expansion lie concealed racial, national or historical claims.

This was not what Nehru wanted to hear. As he saw it, China, like India, had embarked on an ambitious and autonomous program of economic and social development, albeit under Communist auspices. Once more the two great civilizations could interact with and learn from each other. As Nehru wrote to his chief ministers in June 1952: “[A] variety of circumstances pull India and China towards each other, in spite of differences of forms of government. This is the long pull of geography and history and, if I may add, of the future.” Later the same year, after a visit to India’s northeast, Nehru insisted that there was not “the slightest reason to expect any aggression on our north-eastern frontier.”

was particularly anxious, of course, for the friendship and co-operation of India. . . . His talk was wholly different from the normal approach of the average Communist, which is full of certain slogans and cliches. He hardly mentioned Communism or the Soviet Union or European politics.

Nehru made a return visit to China in October 1954. In Beijing, a million people lined the roads to greet and cheer Nehru and Chou as they drove in an open car from the airport to the city. Then he visited Canton, Dalian and Nanjing to much the same applause.

This reception must certainly have flattered Nehru. But it seems also to have convinced him of the depth of popular support for the regime and of the desire for friendship with India. He had “no doubt at all that the Government and people of China desire peace and want to concentrate on building up their country during the next decade or so.” Indeed, in a 1954 speech on Sino-Indian relations, Nehru articulated his policy of nonalignment, based on the principle of mutual nonaggression and noninterference with (and from) any great powers.

Toward the end of 1956, Chou En-lai visited India again. The Dalai Lama was also in his party. The Tibetan leader briefly escaped his Chinese minders and told Nehru that conditions were so harsh in his country that he wished to flee to India. Nehru advised him to return home. In 1958, the Indian prime minister asked to visit Tibet but was refused permission. The first seeds of doubt, or at least confusion, were thus planted in Nehru’s mind—perhaps the Chinese were not as straightforward, or indeed as progressive, as he had supposed.

Adding to the uncertainty, in July 1958 a map was printed in Beijing which showed large parts of India as Chinese territory. It was also revealed that the Chinese had built a road linking the two troublesome provinces of Xinjiang and Tibet that passed through an uninhabited and scarcely visited stretch of the Indian district of Ladakh. There were protests from New Delhi, whereupon Chou En-lai wrote back saying that the McMahon Line was a legacy of British imperialism and hence not “legal.” The Chinese leader suggested that both sides retain control of the territory they currently occupied, pending a final settlement. 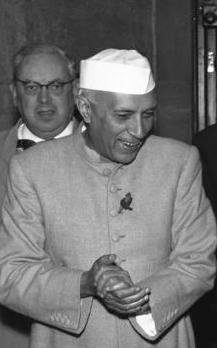 Pullquote: A view now quite common in New Delhi is that India must actively pursue closer military and economic ties with the United States to thwart and combat an assertive China.Essay Types: Essay