The Deepening Chaos in Sinai THE GROWING instability in Egypt’s Sinai Peninsula represents one of the most dangerous, and most anticipated, crises in the Middle East. Even before the 2011 Egyptian revolution, the security vacuum in the Sinai allowed criminals and terrorists, including those with an ideology akin to Al Qaeda’s, to expand their operations. In the chaos after the revolution, these problems have worsened. Meanwhile, various Palestinian groups use the Sinai as a launching pad for attacks against Israel. The large-scale smuggling of weapons and civilian goods to and through this territory—much of it bound for Gaza—has fostered an illicit economy in both Gaza and Sinai while helping Hamas bolster its military capacity and political grip over Gaza. Increasing violence and instability in Sinai could complicate Egypt’s already-troubled transition and raise the prospect of renewed large-scale conflict between Israel and Hamas. And the reverse is also true, as witnessed by the dramatic spike in deadly violence in Sinai following the ouster of Egypt’s Islamist president Mohamed Morsi in July. In addition to instability in Egypt, prospects for an Egyptian-Israeli military clash also could be heightened, in which case the United States could find itself caught between its closest ally in the region, Israel, and a vital Arab partner on which regional stability depends.

On the surface, the Sinai-Gaza crisis looks simply like an issue of border security. Fighters and weapons go to and from Gaza via the Sinai, and these, in turn, are used to attack Israel and undermine stability in Egypt. Meanwhile, the illicit economies that have grown on both sides of the Gaza-Sinai border are largely the product of increased smuggling operations that grew in response to the closure of Gaza’s borders. But this surface picture shrouds much deeper and far more complex political issues. For Egypt, policing the Sinai is caught up in the country’s turbulent internal politics, with successive civilian governments, including the former Muslim Brotherhood–led government, the military and the intelligence services all wanting to avoid responsibility while asserting their power vis-à-vis one another. For Hamas, the smuggling economy is vital both to its military power and its ability to prop up Gaza’s feeble economy. Meanwhile, for the Fatah-led Palestinian Authority (PA), which was forced out of Gaza by Hamas in 2007, the Sinai problem underscores its growing political irrelevance.

The irony is that all of the main actors—Egypt, Israel, Hamas and the PA—would prefer to see changes in the status quo. Israel, of course, would like to have calm on its borders as well as neighbors that can deal effectively and responsibly with violence and smuggling, even if they are not openly friendly. Egyptian officials worry that instability in the Sinai will become a lightning rod for renewed war and a breeding ground for radicalism in Egypt, further undermining the credibility of the security services and any government, be it military or civilian. They also fear, with some reason, that Israel seeks to dump the Gaza problem in Egypt’s lap. Cairo also seeks to reassert its sovereignty in the Sinai, where restrictions imposed by the 1979 Egyptian-Israeli peace treaty are seen by Egyptians as an affront to national pride. Palestinian president Mahmoud Abbas and other PA figures would welcome the chance to return to Gaza as well as the added legitimacy that would come simply from being part of any new arrangement.

Even Hamas—or perhaps especially Hamas—worries about the Sinai. Many of the radicals there have links inside the Gaza Strip and oppose Hamas nearly as much as they oppose Israel, seeing the Palestinian group as insufficiently zealous in its pursuit of an Islamic state in Gaza and too accommodating with Israel. Moreover, whereas Hamas’s fortunes had improved following the Arab uprisings, the toppling of Morsi and the Brotherhood in Egypt dealt the most serious blow yet to Gaza’s Islamist rulers. Even under Egypt’s short-lived Muslim Brotherhood government Gaza’s borders were never fully opened. Moreover, since Morsi’s ouster, Egyptian authorities have imposed even tighter restrictions on the Gaza border and stepped up efforts to destroy the smuggling tunnels beneath the border, renewing and intensifying Gaza’s and Hamas’s isolation.

By working with Israel, Egypt, the PA and friendly governments in the region, the United States can help forge a new regional dynamic. All involved would have to make concessions, some of which would require risks. Doing so, however, would reduce the chance of a confrontation over Sinai, help protect Israel from attacks, make the success of peace talks more likely and improve regional stability. The goal would be to ensure not only that everyone gets something but also that everyone has a stake in continuing at least de facto cooperation.

EGYPT AND ISRAEL have long enjoyed a largely peaceful border, but even before the fall of Hosni Mubarak in February 2011 the Sinai had become home to numerous groups bent on attacking Israel. On February 4, 2008, a suicide bomber entered Israel from Sinai and attacked Dimona, a city close to the border that is the home of Israel’s nuclear establishment. Later, in two separate incidents in 2010, rockets fired from Sinai hit the resort town of Eilat.

The situation became more fraught after Mubarak’s fall. The most deadly cross-border event in years occurred in August 2011, when infiltrators based in the Sinai conducted multiple attacks near Eilat, killing eight Israelis. The Eilat attacks were dangerous not only because of the lives lost, but also because of the risk of escalation. Israeli forces pursued the attackers into Sinai and accidentally clashed with Egyptian troops there, killing five. Israel initially blamed the Gaza-based Popular Resistance Committees (PRC) and bombed several sites in the Strip, killing fifteen Palestinians, including the leader of the PRC. Hamas responded with rocket attacks, in which one Israeli was killed. A few weeks later, Egyptian protesters angry at the killing of Egyptian soldiers stormed the Israeli embassy in Cairo, prompting the evacuation of the ambassador and his staff and sparking a diplomatic crisis between Egypt and Israel.

Cooler heads in both Egypt and Israel prevailed (aided by U.S. mediation), and Hamas also backed down. But should another clash occur at a tense time in Egyptian politics—and Egyptian politics are very tense now—it may be hard for the regime in Cairo to avoid a confrontation. Israeli-Egyptian relations could sour, jeopardizing broader cooperation.

During 2012, the number of attacks on Israel originating in the Sinai grew considerably. According to a report from Israel’s intelligence service, eleven attacks emanated from the Sinai that year, including rocket attacks and five attempted infiltrations. Militants also routinely targeted the pipeline running from Egypt to Israel, exchanged fire with Israeli troops and planted explosives along the border. Many more attacks were thwarted.

Although Israel often blames Hamas or other Gaza-based Palestinian groups for the violence, frequently the attackers are Sinai-based jihadists, who are ideologically more like Al Qaeda than Hamas. As a report from Israel’s Intelligence and Terrorism Information Center concluded: “The Sinai Peninsula has been turned into a convenient venue for terrorist organizations affiliated with the global jihad.” Khalil al-Anani, a Middle East expert at Durham University in England, similarly warns, “Sinai is ideal and fertile ground for al Qaeda. It could become a new front for al Qaeda in the Arab world.” Although the threat is predominantly homegrown, the mix also includes a handful of foreign fighters. Israel asserts that Iran-backed groups such as Palestinian Islamic Jihad are also active in Sinai.

The threat comes primarily from elements within isolated and often-disaffected communities in Sinai or Gaza—and very often both, given the many tribal, commercial and other links that exist particularly among the bedouin communities of Sinai, Gaza and even Israel. Within these marginalized and interconnected communities, various Salafi-jihadi groups have emerged. These groups do not always cooperate with one another, but they often share a common leadership, cadres, training and supplies. And they are highly dangerous. Some wish to affiliate formally with Al Qaeda, while others do not. However, Al Qaeda has so far been reluctant to embrace these groups, perhaps due to doubts about their operational sophistication and overall level of support, though in 2011 Al Qaeda leader Ayman al-Zawahiri praised the “heroes” in Sinai who attacked the gas pipeline to Israel.

The jihadists, who see attacking Israel as their main mission, seek to exploit the Sinai’s strategic position and instability to inflame regional tension. By attacking Israel, they hope to provoke Israeli strikes on Egypt, thereby inflaming the Egyptian public and forcing Egyptian authorities into a military response. Their objective is to set off a chain reaction, triggering tension, strife and even war. In so doing, they hope to destroy the thirty-year peace between Egypt and Israel.

THE REMOVAL of Egypt’s first Islamist president in July breathed new life into jihadi elements in Sinai and elsewhere in Egypt. The weeks immediately following Morsi’s ouster saw a major spike in deadly attacks on both civilian and military targets in Sinai, while calls for jihad and the black flag of Al Qaeda became common features of pro-Morsi rallies across Egypt. After fifty Brotherhood protesters were killed by the army on July 8, one speaker in Cairo declared, “The era of peace has ended. If the army attacks us we will attack back. We say to the Egyptian army that the day might yet come when we tell it to leave Sinai.” While there is no clear evidence of any operational ties with the Brotherhood, the nearly daily attacks in the Sinai are looking increasingly like a low-level insurgency. 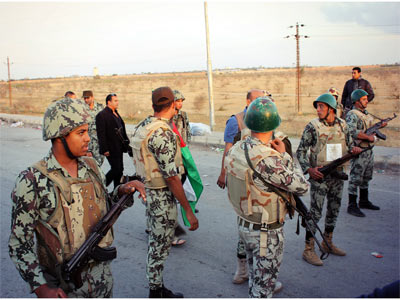 Pullquote: Increasing violence and instability in Sinai could complicate Egypt's already-troubled transition and raise the prospect of renewed large-scale conflict between Israel and Hamas.Essay Types: Essay