The Divided Map of Europe THE IDEA of Europe, in the minds of Westerners today, is an intellectual concept—liberal humanism with a geographical basis—that emerged through centuries of material and intellectual advancement, as well as a reaction to devastating military conflicts in previous historical ages. The last such conflict was World War II, which spawned a resolve to merge elements of sovereignty among democratic states in order to set in motion a pacifying trend.

Alas, this grand narrative now is under assault by underlying forces of history and geography. The economic divisions seen today in the European Union, manifest in the Continent’s debt crisis and pressures on the euro, have their roots, at least partially, in contradictions that stretch far back into Europe’s past and its existential struggle to grapple with the realities of its immutable geographical structure. It is this legacy—somewhat deterministic and rarely acknowledged—that Europe still must overcome and that therefore requires a detailed description.

In the years immediately before and after the collapse of the Berlin Wall, intellectuals celebrated the ideal of Central Europe—Mitteleuropa—as a beacon of relative multiethnic tolerance and liberalism within the Hapsburg Empire to which the contiguous Balkans could and should aspire. But while the Continent’s spiritual heart lies in Mitteleuropa, the political heart now lies slightly to the northwest, in what we might call Charlemagne’s Europe. Charlemagne’s Europe starts with the Benelux states, then meanders south along the Franco-German frontier to the approaches of the Alps. To wit, there is the European Commission and its civil service in Brussels, the European Court in the Hague, the treaty town of Maastricht, the European Parliament in Strasbourg and so on. All these places lie athwart a line running southward from the North Sea “that formed the centerpiece and primary communications route of the Carolingian monarchy,” observes the late scholar of modern Europe Tony Judt.1 The fact that this budding European superstate of our own era is concentrated in Europe’s medieval core, with Charlemagne’s capital city of Aachen (Aix-la-Chapelle) still at its very center, is no accident. For nowhere on the Continent is Europe’s sea and land interface quite as rich and profound as along this spinal column of Old World civilization. In the Low Countries, there is the openness to the great ocean, even as the entrance to the English Channel and a string of islands in Holland form a protective barrier, giving these small states advantages out of proportion to their size. Immediately to the rear of this North Sea coast is a wealth of protected rivers and waterways, all promising trade, movement and consequent political development. The loess soil of northwestern Europe is dark and productive, and the forests provide a natural defense. Finally, the cold climate between the North Sea and the Alps, much more so than the warmer climate south of the Alps, has been sufficiently challenging to stimulate human resolve from the late Bronze Age forward, with Franks, Alamanni, Saxons and Frisians settling in late antiquity in Gaul, the Alpine foreland and the coastal lowlands. Here, in turn, would be the proving grounds of Francia and the Holy Roman Empire in the ninth century, of Burgundy, Lorraine, Brabant and Friesland, too, and of city-states such as Trier and Liege, all of which collectively displaced Rome and then fostered the polities that today drive the machinery of the European Union.

Of course, before all of the above came Rome—and before Rome, Greece. Both, in University of Chicago scholar William H. McNeill’s choice words, constitute the antechamber of the “anciently civilized” world that began in Egypt and Mesopotamia and spread from there through Minoan Crete and Anatolia to the northern shore of the Mediterranean. Civilization, as we well know, took root in warm and protected river valleys such as the Nile and Tigris-Euphrates, then continued its migration into the relatively mild climates of the Levant, North Africa, and the Greek and Italian peninsulas, where living was hospitable with only rudimentary technology.

But though European civilization had its initial flowering along the Mediterranean, it continued to develop, in ages of more advanced technology and mobility, further to the north in colder climes. Rome expanded here in the decades before the start of the Common Era, providing for the first time political order and domestic security from the Carpathians in the southeast to the Atlantic in the northwest—that is, throughout much of Central Europe and the region by the North Sea and English Channel. Large settlement complexes, called oppida by Julius Caesar, emerged throughout this sprawling, forested and well-watered European black-soil heartland, which provided the rudimentary foundation for the emergence of medieval and modern cities.2

Just as Roman expansion gave a certain stability to the so-called barbarian tribes of northern Europe, Rome’s breakup would lead over the centuries to the formation of peoples and nation-states in what was to become Charlemagne’s empire and Mitteleuropa. To be sure, the world of the Middle Ages replaced the world of antiquity as the geographic hold of the Mediterranean “slackened,” when northern Europe simply broke free of Rome.3 (Mediterranean unity was, of course, further shattered by the Arab thrust across North Africa.)4 By the eleventh century, the map of Europe already had a modern appearance, with France and Poland roughly in their present shapes, the Holy Roman Empire in the guise of a united Germany and Bohemia—with Prague at its center—presaging the Czech Republic. Thus did history move north. And this is absolutely key for our own economically troubled time.

Mediterranean societies, despite their innovations in politics—Athenian democracy and the Roman Republic—were by and large defined by “traditionalism and rigidity,” in the words of the French historian and geographer Fernand Braudel. The poor quality of Mediterranean soil favored large holdings that were, perforce, under the control of the wealthy. And that, in turn, contributed to an inflexible social order. Meanwhile, in the forest clearings of northern Europe, with their richer soils, a freer civilization grew up, anchored by the informal power relationships of feudalism that would be able to take better advantage of the invention of movable type and other technologies yet to come.5

As deterministic as Braudel’s explanation may appear, it does work to explain the broad undercurrents of the European past. Obviously, human agency in the persons of such men as Jan Hus, Martin Luther and John Calvin was pivotal to the Protestant Reformation and hence to the Enlightenment that would allow for northern Europe’s dynamic emergence as one of the cockpits of history in the modern era. Nevertheless, all that could not have happened without the immense river and ocean access and the loess earth, rich with coal and iron-ore deposits, which formed the foundation for such individual dynamism and industrialization. Great, eclectic and glittering empires certainly flowered along the Mediterranean in the Middle Ages—notably the Norman Roger II’s in twelfth-century Sicily, and, lest we forget, the Renaissance blossomed first in late-medieval Florence, with the art of Michelangelo and the secular realism of Machiavelli. But it was the pull of the colder Atlantic that opened up global shipping routes that ultimately won out against the enclosed Mediterranean. While Portugal and Spain were the early beneficiaries of this Atlantic trade—owing to their protruding peninsular position—their pre-Enlightenment societies, traumatized by the proximity of (and occupation by) North African Muslims, lost ground eventually in the oceanic competition to the Dutch, French and English. So just as Charlemagne’s Holy Roman Empire succeeded Rome, in modern times northern Europe succeeded southern Europe, with the mineral-rich Carolingian core winning out in the form of the European Union. All this is attributable, in some measure, to geography.

THE MEDIEVAL Mediterranean was itself divided between the Frankish West and the Byzantine East. For it isn’t only divisions between north and south that both define and plague Europe today but also those between west and east and, as we shall see, between northwest and center. Consider the migration route of the Danube Valley that continues eastward beyond the Great Hungarian Plain, the Balkans and the Black Sea, all the way through the Pontic and Kazakh steppes to Mongolia and China.6 This geographical fact, along with the flat, unimpeded access to Russia further north, forms the basis for the waves of invasions of mainly Slavic and Turkic peoples from the East, which have, as we know, greatly shaped Europe’s political destiny. So just as there is a Carolingian Europe and a Mediterranean Europe, there is, too, often as a result of these invasions from the East, a Byzantine-Ottoman Europe, a Prussian Europe and a Hapsburg Europe, all of which are geographically distinct and have an echo today through somewhat differing economic-development patterns, however many other factors may be involved. And these varying patterns cannot simply be erased by the creation of a single currency.

Indeed, in the fourth century AD, the Roman Empire itself divided into western and eastern halves. Rome remained the capital of the western empire, while Constantinople became the capital of the eastern one. Rome’s western empire gave way to Charlemagne’s kingdom further north and to the Vatican—Western Europe, in other words. The eastern empire, Byzantium, was populated mainly by Greek-speaking Orthodox Christians and later by Muslims when the Ottoman Turks, migrating from the East, captured Constantinople in 1453. The border between these eastern and western empires ran through the middle of what after World War I became the multiethnic state of Yugoslavia. When that state broke apart violently in 1991, at least initially the breakup echoed the divisions of Rome sixteen centuries earlier. The Slovenes and Croats were Roman Catholics, heirs to a tradition that went back from Austria-Hungary to Rome in the West. The Serbs were Eastern Orthodox and heirs to the Ottoman-Byzantine legacy of Rome in the East. The Carpathian Mountains, which run northeast of the former Yugoslavia and divide Romania into two parts, partially reinforced this boundary between Rome and Byzantium and later between the Hapsburg emperors in Vienna and the Turkish sultans in Constantinople. Passes and thus trade routes existed through these formidable mountains, bringing the cultural repository of Mitteleuropadeep into the Byzantine and Ottoman Balkans. But even if the Carpathians were not a hard and fast border, like the Alps, they marked a gradation, a shift in the balance from one Europe to another. Southeastern Europe would be poor not only compared to northwestern Europe but also in comparison to northeastern Europe, with its Prussian tradition. That is to say the Balkans were not only poor and politically underdeveloped compared to the Benelux countries but also compared to Poland and Hungary. 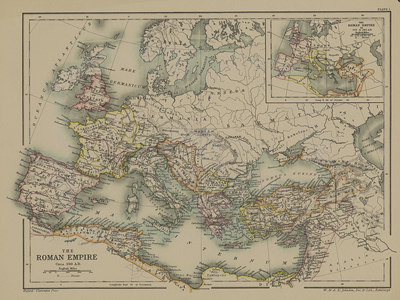 Pullquote: The fact that this budding European superstate of our own era is concentrated in Europe’s medieval core, with Charlemagne’s capital city of Aachen still at its very center, is no accident.Essay Types: Essay