PRESIDENT OBAMA’S pivot to East Asia is well-timed. The geostrategic importance of the Middle East is vastly overblown. The region matters to the United States chiefly because of its influence in the world oil market, but that influence has been in terminal decline for a generation, a fact almost wholly unnoticed by outside observers. A confluence of developments—including rising prices and production costs, declining reserves, and the availability of alternate fuels and unconventional sources of oil—will decisively undermine the defining role of the Middle East in the global energy market. Meanwhile, the United States has vital interests at stake elsewhere in the world at least as pressing, if not more so, than its interests in the Middle East. These include thwarting the proliferation of weapons of mass destruction, fighting transnational terrorism and maintaining stability in key strategic locations of the world.

For centuries prior to World War II, the Middle East was considered strategically irrelevant. Alexander the Great marched across the impoverished Arabian Peninsula only because it lay between him and his goal: the fabled wealth of Persia and India. The region was merely an expanse to be crossed for traders on the Silk Road between Europe and China in the Middle Ages. The great empires of modern Europe turned to every other region in the world, including Africa, before colonizing the Middle East late in the age of empire because the vast desert appeared to be of little use to them. The British occupied Egypt in the nineteenth century and invested in the Suez Canal not because of anything Egypt had to offer but because it was the fastest way to get to India.

The contemporary strategic importance of the Middle East stems from its comparative advantage in producing oil, a commodity vital to the modern world economy. This comparative advantage is based on four factors. First, Middle Eastern oil is the cheapest in the world to produce because of simple geology. Middle Eastern oil lies under flat desert, not under an ocean or in the Amazonian river basin. In 2008, producing a barrel of oil cost between $6 and $28 in the Middle East and North Africa, compared to up to $39 elsewhere in the world and up to $113 per barrel of oil shale.

Second, most Middle Eastern oil is a superior product. The chemical properties of Middle Eastern “light sweet” crude oil make it easier and cheaper to refine than the “heavy” crude of Venezuela, for example. Third, Middle Eastern oil developers benefit from economies of scale because the cheap oil there is so plentiful. Even today, the region is still home to more than half the world’s proven, commercially viable conventional oil reserves and a third of world oil production. Fourth, the Middle East’s dominance of oil production and reserves makes it “too big to fail,” which effectively lowers producers’ risks. Buyers believe, with justification, that neither the governments in the region nor the developed world would allow a significant disruption to oil production (especially after the embargoes in the 1970s backfired).

This comparative advantage translates into global power and influence because of the modern world economy’s high demand for oil. Oil was used for lighting and lubrication long before the industrial era, but the modern market for oil started in 1886, when Karl Benz invented a machine for automated mobility powered by an internal-combustion engine fueled by refined petroleum. In a remarkably short time, the world abruptly ceased using steam, coal and animals to power the transport of people and goods, transitioning almost entirely to petroleum products. One hundred twenty-five years after Benz patented the automobile, Americans consumed thirty-six quadrillion BTUs of energy from petroleum. This provided 94 percent of their transportation-energy needs and 40 percent of their industrial-energy consumption; it also accounted for more than a third of the nation’s entire energy demand. The United States’ experience has been mirrored in countries across the globe. Global transportation—by car, truck, airplane, bus, motorcycle, boat and even some trains—is overwhelmingly powered by fuels derived from oil.

THESE TWO factors—the Middle East’s comparative advantage in oil production and the world economy’s need for oil to power transport—made the modern Middle East what it is today. The region would not be as strategically important otherwise.

But the Middle East’s comparative advantage in energy production and the world’s need for oil both peaked around 1974, and both have been in long-term decline ever since. In reaction to the oil embargoes and disruptions of 1974 and 1979, the Western world embarked on a generational and largely successful effort at energy conservation. The United States’ energy intensity—a measure of how much energy is used per dollar of GDP—has been cut in half since 1973, falling from 15,400 BTUs per dollar to 7,470 in 2010, according to the U.S. Energy Information Administration. This unheralded success means that because of advances in efficiency and conservation practices, the world economy is less dependent on all forms of energy, oil included, than previously. Additionally, the world’s energy needs are being met by an ever-expanding menu of inputs, including nuclear power and renewable sources. In 2010, petroleum’s share of America’s energy sources was the lowest it had been since 1951. The world economy’s oil intensity, or “the amount of oil needed to produce one dollar of GDP,” in the words of the International Energy Agency (IEA), “has fallen steadily over the last three decades.” That is not the whole story: “The decline has accelerated since 2004, mainly as a result of higher oil prices, which have encouraged conservation, more efficient oil use and switching to other fuels.” The introduction of electric and hybrid cars in recent years, while still in its infancy, promises to accelerate the decline in demand for petroleum-based fuels.

The Middle East’s comparative advantage in oil production also is eroding. It will always have a superior product, but the three other factors comprising its advantage are disappearing. First, oil-production costs in the Middle East are certain to rise. Oil is so cheap in the region because it is easy to get out of the ground. But as the world uses up the cheapest and most easily developed oil, Middle Eastern crude will become more costly to produce. Some fields in the Middle East have been producing continuously for eighty years and are rapidly maturing (meaning they are almost past their peak production). Saudi Arabia in particular has a high percentage of mature or maturing oil fields. Thirteen of the twenty largest oil fields in the world are located in the Middle East, and they all entered production between 1928 and 1968. As a field passes its peak, it becomes more technically difficult and costly to extract its oil. This is especially true once a developer switches to secondary, tertiary and unconventional methods to extract the remaining oil. Production costs in the Middle East inevitably will rise in coming years; that is as certain as the laws of geology and economics. The oil market will be characterized increasingly by harder-to-develop, more expensive oil.

This trend will accelerate as demand for oil increases in the developing world and prices rise. After the oil-price spikes of the 1970s, the rest of the world invested in oil production (and energy conservation). The Middle East’s share of production fell to less than 19 percent by 1985, its lowest point since 1953. Overcapacity then caused prices to collapse, and the Middle East recovered its relative position in the market, but the episode shows what is in store for the future. Prices are on a long-term and relentless increase, driven largely by rising demand in places like China and India; global liquid-fuel consumption is likely to reach 111 million barrels per day by 2035—up from 85 million barrels per day today. Prices have risen sharply since 2002, partly because of political instability in the region but also in part because of the long-term, underlying pressures on the market. This is likely to spur worldwide investment in capacity, further eroding the Middle East’s market share over the next decade.

Second, rising prices are a powerful incentive for producers to develop new production capacity in other regions and through unconventional methods. Oil recovered from secondary and tertiary drilling technology or from shale, sand and deep-water rigs will become more commercially viable as prices rise. The Middle East’s market share will shrink, and other regions will start to benefit from the same economies of scale that Middle Eastern producers have enjoyed, leveling the playing field. Already, the Middle East accounts for a decreasing amount of the world’s proven oil reserves. It accounted for 56 percent of reserves in 2010, its second-lowest point since 1953. This was down from 66 percent in 2002 and below the long-term average of 61 percent over the last three decades. Even those numbers may be inflated; much of the Middle East’s reserve growth in recent decades came in a single leap, from 1986 to 1987, when several states reported sudden and massive increases in their estimated reserves without further exploration or technological development. Industry experts speculate these “paper reserves” were primarily a bargaining tool in negotiations between OPEC states—because OPEC members’ production quotas are linked to their proven reserves, claiming more reserves allows them to produce more. Reported figures since then are unreliable. Even under the inflated numbers, the Middle East accounts for only 46 percent of remaining reserves of oil and liquid natural gas ultimately recoverable with conventional means, according to the IEA. 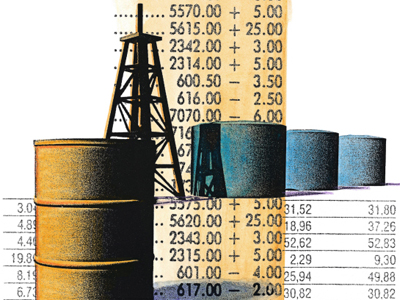 Pullquote: Our rationale for guaranteeing the Middle East's stability in exchange for cheap oil is fading, and that mission quickly is becoming more trouble than it is worth.Essay Types: Essay