The False Neocon View of Reagan OF ALL the U.S. presidents since Franklin Roosevelt, none stands taller in history or exercises a greater lingering influence on American politics than Ronald Reagan. Republican politicians invoke his name as example and lodestar, and Democrats have granted him increasing respect as the passions of his presidential years have ebbed with time. Surveys of academics on presidential performance, initially dismissive, now rank him among the best of the White House breed. Even President Obama has extolled his approach to presidential leadership.

This veneration poses a dark danger—that Reagan will become associated with philosophies he never held and policies he never pursued. This is happening today with increasing force as neoconservative intellectuals and politicians seek to conflate Reagan’s Cold War strategy with their push for American global dominance in the name of American values. Their aim is to equate today’s Islamic fundamentalism with Russian Bolshevism and thus boost the argument that U.S. military actions in the Middle East are a natural extension of Reagan’s forceful—and successful—confrontation with Soviet Communism in the 1980s.

Back in 2002, when neoconservative war advocates were beating the drums for the Iraq invasion, William Kristol, editor of the neoconservative Weekly Standard, told the Financial Times: “Americans see clearly which are democratic states and which are tyrannies in the world today, as they did when the Soviet Union was the main enemy.” Writing in Kristol’s magazine, Reuel Marc Gerecht declared that George W. Bush’s “liberation theology” constituted a “Reaganesque approach.” Bush himself, in declaring that the “advance of freedom is the calling of our time,” invoked Reagan as a progenitor of his missionary drive. Some months later, Kristol noted admiringly that Bush’s foreign-policy advisers, nudging the country to war, were “all Reaganites.”

More recently, these efforts to wrap Bush’s aggressive foreign policy in a Reagan blanket have been duplicated in the rhetoric of the now-dwindling field of candidates for this year’s GOP presidential nomination. Mitt Romney, Rick Santorum and Newt Gingrich all identified Reagan as a model for the foreign-policy bellicosity they espoused with such zeal during the campaign.

This is all specious. The West’s Cold War victory was a triumph of foreign-policy realism, not neocon pugnacity. It came about through measured, deliberate decision making over decades. If the victory teaches us anything about American foreign policy in our time, it is that the country should not have abandoned its successful Cold War steadiness for the provocative sledgehammer approach adopted after 9/11.

Kristol captured the neocon Cold War narrative when he wrote in 2005 that Truman’s defensive “containment” policy was appropriate to the early Cold War challenge, but “Reagan was able, two decades later, to go further and to talk of transcending or overwhelming communism.” This suggests Reagan’s approach departed fundamentally from what had come before.

Not so. Reagan’s policies were built upon the foundation established by his two GOP predecessors, Presidents Richard Nixon and Gerald Ford, and their predecessors going back to Truman. Like them, Reagan sought to contain the Soviets and deflate their influence while engaging them on matters ripe for discussion. But there were four differences between Reagan and, for example, Nixon. First, Reagan, unlike Nixon, had sufficient political support at home to expand the American military and force the Soviets into an arms race they could not win. Second, Reagan exploited that opportunity by wrapping his real-world maneuverings in the rhetoric of American idealism and democratic virtue. Nixon thought he could stir the nation with his ultimate success. Reagan, a far better politician, understood that stirring the nation was a precondition of success. Third, Reagan expunged from government the lingering vestiges of historical pessimism that had seeped into the Nixon-Ford presidencies—a feeling that the Soviets were on the right side of history and the United States needed to negotiate accordingly. Finally, Reagan encountered an entirely different Kremlin sensibility when Mikhail Gorbachev emerged as Soviet leader. Gorbachev presented an opening for serious dialogue far more promising than anything Nixon encountered, and Reagan quickly moved to exploit that opportunity.

Like Reagan, the neoconservatives of that day rejected the pessimism that had encumbered the Nixon and Ford administrations. But they also embraced the idea of morality in foreign policy far more than Reagan did. Along the way, they perpetrated the myth of the Reagan presidency: the notion that the fortieth president was a champion of foreign-policy initiatives based on an emotional devotion to moral precepts.

If that were the case, why did candidate Reagan in 1979 pluck from relative obscurity a Georgetown University political scientist named Jeane Kirkpatrick based on her attack on the Carter administration for attempting to force democratic reforms on autocratic leaders aligned with the United States? And why, as president, did he manifest such reluctance to withdraw U.S. support from Ferdinand Marcos of the Philippines when a popular uprising emerged against his autocratic rule?

No, Reagan’s focus was on winning the Cold War, and his genius was in seeing that it was actually possible to do so when almost nobody else in America could visualize it. True, he employed stronger anti-Soviet rhetoric than his predecessors considered politic or prudent. And he unfurled stirring language of democratic idealism, which he genuinely felt. But he deployed no large armies to foreign lands in the name of Western democracy. He never sought to roll back communism in places where Soviet interests were most pronounced and would be most vociferously protected. His policies were the same policies of containment that had guided America’s Cold War strategy since the time of Truman.

It is true that a fundamental debate emerged within the Republican Party during the Nixon and Ford presidencies. And Reagan stood foursquare against the “détente” policies adopted by those two presidents, guided as they were by that historical pessimism that shrouded from their vision the underlying strength of America vis-à-vis the Soviets. Had Reagan adopted that approach, America’s Cold War victory would have been thwarted or much delayed.

But that was a debate over how to wage the Cold War, not whether the Cold War should become a hot war. It was a debate within the realm of realism, not between realism and neoconservatism. Indeed, the neoconservatives of Reagan’s day splattered him constantly with criticism for not waging the Cold War more aggressively. Only after his policies contributed to Washington’s eventual triumph did they jump aboard and craft the narrative now put forth by Kristol and others—that Reagan, with themselves at his side, departed from traditional Cold War doctrine and set the nation on a new course that led directly to their Wilsonian ethos, to the Iraq invasion and to today’s foreign-policy adventurism.

Probably the most intriguing conflation of the Cold War with the West’s current challenge from Islamic fundamentalism was George W. Bush’s pronouncement that Iraq, Iran and North Korea constituted an “axis of evil”—an obvious throwback to Reagan’s controversial characterization of the Soviet Union as an “evil empire.” Herein we see the fundamental contrast between America’s Cold War adversary and today’s far different Islamic fundamentalism. The Cold War was a war of ideology, waged against a secular dogma divorced from the cultural heritage of any civilization or nation. With brutal efficiency, it superimposed itself upon the culture of civilizations and nations, smothering those cultural traditions in the name of an artificial world outlook. If this isn’t civic evil, then the word has no meaning.

Islamic fundamentalism emanates from the culture of Islam. It can be seen as a perversion of that culture but also as an inevitable outgrowth of that culture—what German historian Oswald Spengler called the Magian civilization—at this particular point in its historical development. Either way, it has perpetrated plenty of evil acts. But it can’t be divorced from the definitional struggles within Islam and hence can’t be divorced from Islam. Nor can it be divorced from the historical lesson that Samuel P. Huntington so brilliantly demonstrated—namely, that civilizational clashes are most likely to be brutal, bloody and persistent because they concern the fundamental identities of peoples. Hence they are not easily adjudicated or negotiated away.

And so it should be clear that, if America’s patient and measured realism was the right formula for the ideological struggle of the Cold War, which ultimately was about power and the will to use it, then it is even more apt for today’s civilizational confrontation, which is about emotional issues of cultural identity. And no effort to recast Ronald Reagan or redefine Reaganism will change that reality. 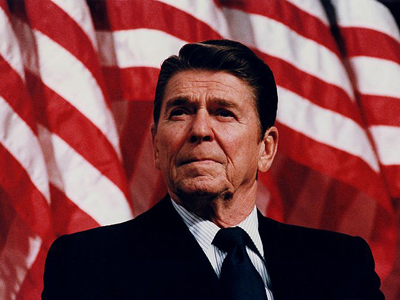 Pullquote: The West’s Cold War victory was a triumph of foreign-policy realism, not neocon pugnacity. It came about through measured, deliberate decision making over decades.Essay Types: The Realist