The Global Power Shift from West to East WHEN GREAT powers begin to experience erosion in their global standing, their leaders inevitably strike a pose of denial. At the dawn of the twentieth century, as British leaders dimly discerned such an erosion in their country’s global dominance, the great diplomat Lord Salisbury issued a gloomy rumination that captured at once both the inevitability of decline and the denial of it. “Whatever happens will be for the worse,” he declared. “Therefore it is our interest that as little should happen as possible.” Of course, one element of decline was the country’s diminishing ability to influence how much or how little actually happened.

We are seeing a similar phenomenon today in America, where the topic of decline stirs discomfort in national leaders. In September 2010, Secretary of State Hillary Clinton proclaimed a “new American Moment” that would “lay the foundations for lasting American leadership for decades to come.” A year and a half later, President Obama declared in his State of the Union speech: “Anyone who tells you that America is in decline . . . doesn’t know what they’re talking about.” A position paper from Republican presidential candidate Mitt Romney stated flatly that he “rejects the philosophy of decline in all of its variants.” And former U.S. ambassador to China and one-time GOP presidential candidate Jon Huntsman pronounced decline to be simply “un-American.”

Such protestations, however, cannot forestall real-world developments that collectively are challenging the post-1945 international order, often called Pax Americana, in which the United States employed its overwhelming power to shape and direct global events. That era of American dominance is drawing to a close as the country’s relative power declines, along with its ability to manage global economics and security.

This does not mean the United States will go the way of Great Britain during the first half of the twentieth century. As Harvard’s Stephen Walt wrote in this magazine last year, it is more accurate to say the “American Era” is nearing its end. For now, and for some time to come, the United States will remain primus inter pares—the strongest of the major world powers—though it is uncertain whether it can maintain that position over the next twenty years. Regardless, America’s power and influence over the international political system will diminish markedly from what it was at the apogee of Pax Americana. That was the Old Order, forged through the momentous events of World War I, the Great Depression and World War II. Now that Old Order of nearly seven decades’ duration is fading from the scene. It is natural that U.S. leaders would want to deny it—or feel they must finesse it when talking to the American people. But the real questions for America and its leaders are: What will replace the Old Order? How can Washington protect its interests in the new global era? And how much international disruption will attend the transition from the old to the new?

The signs of the emerging new world order are many. First, there is China’s astonishingly rapid rise to great-power status, both militarily and economically. In the economic realm, the International Monetary Fund forecasts that China’s share of world GDP (15 percent) will draw nearly even with the U.S. share (18 percent) by 2014. (The U.S. share at the end of World War II was nearly 50 percent.) This is particularly startling given that China’s share of world GDP was only 2 percent in 1980 and 6 percent as recently as 1995. Moreover, China is on course to overtake the United States as the world’s largest economy (measured by market exchange rate) sometime this decade. And, as argued by economists like Arvind Subramanian, measured by purchasing-power parity, China’s GDP may already be greater than that of the United States.

Until the late 1960s, the United States was the world’s dominant manufacturing power. Today, it has become essentially a rentier economy, while China is the world’s leading manufacturing nation. A study recently reported in the Financial Times indicates that 58 percent of total income in America now comes from dividends and interest payments.

Since the Cold War’s end, America’s military superiority has functioned as an entry barrier designed to prevent emerging powers from challenging the United States where its interests are paramount. But the country’s ability to maintain this barrier faces resistance at both ends. First, the deepening financial crisis will compel retrenchment, and the United States will be increasingly less able to invest in its military. Second, as ascending powers such as China become wealthier, their military expenditures will expand. The Economist recently projected that China’s defense spending will equal that of the United States by 2025.

Thus, over the next decade or so a feedback loop will be at work, whereby internal constraints on U.S. global activity will help fuel a shift in the distribution of power, and this in turn will magnify the effects of America’s fiscal and strategic overstretch. With interests throughout Asia, the Middle East, Africa, Europe and the Caucasus—not to mention the role of guarding the world’s sea-lanes and protecting U.S. citizens from Islamist terrorists—a strategically overextended United States inevitably will need to retrench.

Further, there is a critical linkage between a great power’s military and economic standing, on the one hand, and its prestige, soft power and agenda-setting capacity, on the other. As the hard-power foundations of Pax Americana erode, so too will the U.S. capacity to shape the international order through influence, example and largesse. This is particularly true of America in the wake of the 2008 financial crisis and the subsequent Great Recession. At the zenith of its military and economic power after World War II, the United States possessed the material capacity to furnish the international system with abundant financial assistance designed to maintain economic and political stability. Now, this capacity is much diminished.

All of this will unleash growing challenges to the Old Order from ambitious regional powers such as China, Brazil, India, Russia, Turkey and Indonesia. Given America’s relative loss of standing, emerging powers will feel increasingly emboldened to test and probe the current order with an eye toward reshaping the international system in ways that reflect their own interests, norms and values. This is particularly true of China, which has emerged from its “century of humiliation” at the hands of the West to finally achieve great-power status. It is a leap to think that Beijing will now embrace a role as “responsible stakeholder” in an international order built by the United States and designed to privilege American interests, norms and values.

These profound developments raise big questions about where the world is headed and America’s role in the transition and beyond. Managing the transition will be the paramount strategic challenge for the United States over the next two decades. In thinking about where we might be headed, it is helpful to take a look backward—not just over the past seventy years but far back into the past. That is because the transition in progress represents more than just the end of the post-1945 era of American global dominance. It also represents the end of the era of Western dominance over world events that began roughly five hundred years ago. During this half millennium of world history, the West’s global position remained secure, and most big, global developments were represented by intracivilizational power shifts. Now, however, as the international system’s economic and geopolitical center of gravity migrates from the Euro-Atlantic world to Asia, we are seeing the beginnings of an intercivilizational power shift. The significance of this development cannot be overemphasized.

THE IMPENDING end of the Old Order—both Pax Americana and the period of Western ascendancy—heralds a fraught transition to a new and uncertain constellation of power in international politics. Within the ascendant West, the era of American dominance emerged out of the ashes of the previous international order, Pax Britannica. It signified Europe’s displacement by the United States as the locus of global power. But it took the twentieth century’s two world wars and the global depression to forge the transition between these international orders.

Following the end of the Napoleonic wars in 1815, at the dawn of the Industrial Revolution, Britain quickly outstripped all of its rivals in building up its industrial might and used its financial muscle to construct an open, international economic system. The cornerstones of this Pax Britannica were London’s role as the global financial center and the Royal Navy’s unchallenged supremacy around the world. Over time, however, the British-sponsored international system of free trade began to undermine London’s global standing by facilitating the diffusion of capital, technology, innovation and managerial expertise to emerging new centers of power. This helped fuel the rise of economic and geopolitical rivals.

Between 1870 and 1900, the United States, Germany and Japan emerged onto the international scene more or less simultaneously, and both the European and global power balances began to change in ways that ultimately would doom Pax Britannica. By the beginning of the twentieth century, it had become increasingly difficult for Britain to cope with the growing number of threats to its strategic interests and to compete with the dynamic economies of the United States and Germany. 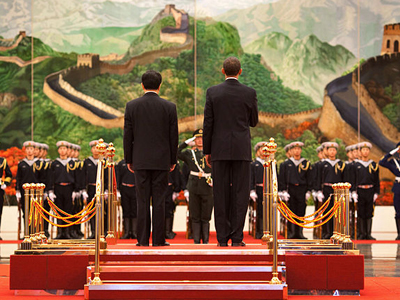 Pullquote: Periods of global transition can be chaotic, unpredictable, long and bloody. Whether the current transitional phase will unfold with greater smoothness and calm is an open question.Essay Types: Essay