The answer, it seems, is that “Marx” has become something like a shortcut or a symbol indicating a predilection for radical change in a wide variety of fields loosely called “cultural studies.” It has little or nothing to do with what Marxism was really all about.

An exploration of this modern phenomenon of Marxism requires that we go back in time. Marx was a genius, but he was not the most reliable of prophets. He provided insights of great importance to the study of economics and of society. Without historical materialism, the importance of the class struggle in history would not have been understood as clearly as it has been. His impact on twentieth-century politics was enormous. But even before the nineteenth century ended, some people closest to him realized that history was not moving in the direction he predicted.

One of these was Eduard Bernstein, a native of Berlin who lived many years in London. He was a friend of the family and, together with Marx’s daughter Eleanor, edited much of the unpublished correspondence and papers of the master after his death. Writing in 1898, he said his intent was not to refute Marx but simply to bring him up to date in light of events. Bernstein saw clearly that pauperization—the process of increasing misery of the proletariat predicted by Marx—was not taking place. Neither was the concentration of capital in a few hands, which Marx saw as an inevitable cause of the collapse of capitalism. Neither did Marx foresee the emergence of the welfare state.

True, there were recurrent crises of capitalism, but they were not those anticipated by Marx. The workers of the world did not unite. The industrial working class did not grow but shrank. Following technological progress, the composition of the working class changed significantly. In Europe, it encompassed many immigrants for whom religion was more important than class-consciousness. And the native working class frequently gravitated to the right—sometimes even to the far right, as in France.

Revolutions did emerge in some countries, but not in the most developed capitalist countries that Marx saw as the spawning ground for revolution. Rather, they occurred in less developed nations whose new revolutionary societies were quite different from what Marx had imagined.

Thus did Marxism rise not on the scientific character of its teaching but on the utopian and romantic idea of revolution. Marx had been contemptuous of the utopian socialists of his time, and his doctrine contained scientific elements. But these elements soon gave way to the general discontent among intellectuals with the status quo, the wish of many to do away with the system’s social and cultural imperfections, and the yen for new cultural values and norms.

What fresh impetus can reasonably be expected from the contemporary Marx renaissance? Expectations should be modest. Marx’s preoccupation was with the inner contradictions of capitalism and the political future of the industrial working class. The renaissance was triggered by the crisis in the developed countries that began in 2008. Marx focused primarily on Britain but also, to a lesser extent, on other European countries that then represented the capitalist vanguard. Yet any serious analysis of capitalism today would focus less on England and more on China.

Among the topics of interest embraced by those involved in the Marx renaissance, in addition to those noted above, are alienation, reification, and other such literary and philosophical pursuits. But such matters have almost nothing to do with today’s crisis of capitalism in Europe and America. It is a debt crisis, raising powerful questions about whether stimulus or austerity is the best medicine to get the economy balanced and moving again. This crisis has almost nothing to do with, say, Marx vs. Eugen von Böhm-Bawerk, the Austrian School economist whose views differed from Marx’s in important ways that now seem trivial. Today the more relevant debate is John Maynard Keynes vs. Friedrich Hayek and Milton Friedman.

In this situation, it is likely that the regulatory state will play a greater role than in the past. A great deal of ill will has welled up against the financial system in part because of the greed displayed by some of its leading movers and shakers but also because of their devastating incompetence. Still, no one so far—neither individuals nor political parties—has suggested the wholesale nationalization of key branches of the economy, the means of production or the banks. That’s what a Marxist approach would look like.

THE CHALLENGE facing Europe and America now is that a new economic world order is emerging. Europe—no longer the main exploiter—will have to think and work hard to save the welfare state, and America will have to do the same for its entitlements. How can these societies find a niche that will enable them to keep their standards of living, or at least prevent too rapid a decline?

Where will they find guidance on how to meet such challenges? It isn’t likely to be found in the venerable works of the British classical economist David Ricardo or the later British economist Nassau William Senior. And not even geniuses such as Adam Smith or Marx can really lead us much further in the pursuit of such guidance. History has moved on. The nineteenth century and its industrial fervor are far behind us.

Will America lead the way? Will China? Marx wrote in an 1850 article for a German newspaper, “When our European reactionaries in the flight to Asia . . . come at length to the Great Wall of China . . . who knows if they will not find there the inscription: République Chinoise. Liberté, Égalité, Fraternité.” But of course no such inscription is to be found at that wall. At most it symbolizes the observation of the late Giovanni Arrighi, the Italian American economics professor of Marxist persuasion, who once wrote that China had a market economy but not a capitalist one. An interesting point but not particularly helpful in meeting the challenge of the world’s contemporary problems.

And so it appears we shall have to wait a bit longer for some kind of lodestar to emerge. In the meantime, it is clear that the perceived renaissance of Marxism, such as it is (which isn’t much), doesn’t offer anything of value in this search. No doubt it will continue to stir fascination in the breasts of activists in various fields of cultural studies, weary of the status quo and hungry for a revolutionary new ethos. But it has nothing to offer the economists of our day—or the rest of mankind, for that matter.

Walter Laqueur is a historian and political commentator. His most recent book is After the Fall: The End of the European Dream and the Decline of a Continent. 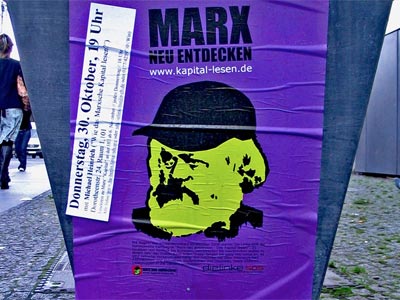