The Myth of the New Isolationism SINCE SEPTEMBER 11, 2001, the United States has damaged its reputation and national security by lurching from one war to the next. Afghanistan, which began triumphantly for the Bush administration, has devolved into a protracted and inconclusive war in which the Taliban is making fresh inroads as American and allied forces hand over security to the Afghan army. Then there is Iraq. It was purveyed by the Bush administration to the American public as a mission that could be accomplished swiftly and smoothly. Neither occurred. Since then, President Obama’s self-styled humanitarian intervention in Libya has led to instability, allowing local militias, among other things, to pretty much bring the oil industry to a standstill by disrupting major export terminals. Most recently, it looked as though Syria might be Libya all over again—an American president embarks on an uncertain crusade, and Britain and France join to provide the necessary diplomatic persiflage for justifying a bombing campaign.

But this time a funny thing happened on the familiar path to war. The British parliament, scarred by memories of Tony Blair’s bogus campaign for war in Iraq, just said no. A similar development occurred on Capitol Hill. Though Secretary of State John Kerry declared that this was a “Munich moment,” no conversion on the road to Damascus took place in the House and Senate. Instead, antiwar Democrats and conservative Republicans made common cause. Faced with a congressional vote in the House and Senate that likely would have been the most humiliating presidential rebuff since Woodrow Wilson lost the League of Nations vote in 1919, Obama pivoted. He acceded to a Russian proposal for a diplomatic solution that may have preserved not only the peace, but also his presidency.

So habituated have America’s media and foreign-affairs elites become to intervening abroad, however, that a chorus of liberal hawks and neoconservatives is decrying what it sees as a resurgence of nasty isolationist sentiments. The New York Times’ Bill Keller, who previously championed the Iraq War, wrote, “America is again in a deep isolationist mood.” After Obama signed off on the agreement with Russia, Richard Cohen fumed in the Washington Post, “Because of Obama’s fecklessness—abetted by a Congress that has turned darkly isolationist—the world is now a less safe place.” And in the Wall Street Journal, the neoconservative columnist Bret Stephens wrote: “The Syria debate is also exposing the isolationist worm eating its way through the GOP apple.”

Actually, it isn’t. Questioning intervention in Syria is not tantamount to a reversion to the most blinkered isolationist sentiments that percolated on both the right and left before Pearl Harbor. Rather, it represents something else—a healthy and sensible and overdue embrace of prudent foreign-policy principles that have, more often than not, been scanted in recent decades.

A GLANCE back at the history of isolationism helps to clarify what is not at stake today. For likening the contemporary controversy over Syria to the one over World War II obscures more than it reveals. Though there were undoubtedly anti-Semitic conservatives on the isolationist side, its adherents, as both Lynne Olson and Susan Dunn show in recent books, ranged across the political spectrum, with such future liberal stalwarts as Kingman Brewster and Sargent Shriver joining the movement. The debate over intervention was not always as irrational as it might seem in retrospect. The burden of proof, given America’s long-standing detachment, was on those who wanted to make the case for intervention. Nor is this all. Though it often tends to be forgotten, the ferocious debate over entering World War II did serve a valuable purpose. Absent that debate Franklin Roosevelt would not have had a unified country behind him as he battled the Germans and Japanese.

The antipathy toward intervention was largely rooted in bitter disappointment with the outcome of World War I, when the punitive Treaty of Versailles flouted the idealistic principles that Woodrow Wilson had enunciated in his Fourteen Points. Instead of ending conflict, the Great War, as it was known, only seemed to prepare the ground for the next one. There was thus vigorous opposition to entry on both the left and right. Many worried that U.S. participation in yet another war would transform the country itself into a dictatorship. As Sidney Hook observed in his memoir Out of Step, Wilson’s own draconian restrictions on civil liberties during World War I, which included the imprisonment of socialist leader Norman Thomas and the passage of the Espionage Act of 1917 that the Obama administration is currently exploiting to silence government whistle-blowers, left a lasting mark:

The recollection of the reign of terror against political dissenters and radical aliens . . . swept the country in the wake of World War I. Members of the Socialist Party, which had heroically resisted giving support to that war, had very vivid memories of the mob action and official lawlessness of those years. Thoroughly exposed and denounced in the twenties and thirties, the terror was fresh in everyone’s memory.

Perhaps the most powerful current running through the isolationist movement was the conviction that World War II simply amounted to another Old World balance-of-power struggle. This was wrong. The realists—whose ranks included Herbert Hoover and the Wall Street Journal editorial page—were unrealistic. They failed to grasp that Hitler was not simply a new version of Kaiser Wilhelm. He was something far more fearsome—a mad tyrant intent on a global war for racial supremacy. After World War II, the isolationist impulse briefly resurfaced in the GOP as Ohio senator Robert Taft—known as “Mr. Republican”—opposed the Marshall Plan, the establishment of NATO and the Korean War. But it became impotent and obsolete once Dwight Eisenhower crushed Taft in the 1952 Republican primaries and won the presidency. Since then isolationism has been a phenomenon confined to figures such as former representative Ron Paul and columnist Patrick J. Buchanan.

Which, in fact, is what it remains. Yes, the Syria debate has created new blocs on both the right and left that are warning about the perils of attacking Syria. But the concerns that they are raising—about the extent of American commitments, about possibly aiding jihadist factions, about a slippery slope—are commonsense ones that should be enunciated before the United States enters any conflict abroad. To call this a retreat from the world amounts to defining isolationism down.

NO DOUBT this territory appears more virgin to the Republicans than to the Democrats. The Democrats were faster off the mark in reconstituting their antiwar faction during the Iraq War. By contrast, the GOP, goaded on by neoconservative thinkers and writers who defected to it en masse during Ronald Reagan’s first run for the Oval Office, successfully depicted many Democrats, from Jimmy Carter onward, as ninety-eight-pound foreign-policy weaklings. In his 1982 novel The Dean’s December, Saul Bellow acutely captured neoconservative disquiet with liberals: “We are used to peace and plenty, we are for everything nice and against cruelty, wickedness, craftiness, monstrousness. . . . Our outlook requires the assumption that each of us is at heart trustworthy, each of us is naturally decent and wills the good.” After 9/11, the neocons achieved suzerainty over Republican foreign-policy debate during the George W. Bush administration, and it has not been successfully dislodged since then. But as the Republican Party reinvents itself, the neocons may be the ones who find themselves in the minority. The Syria debate, along with the brouhaha between leading Republicans such as New Jersey governor Chris Christie and Senator Rand Paul over the National Security Agency’s spying efforts, indicates that the old consensus in the GOP isn’t just fraying. It’s cracking.

A new generation of leaders is emerging in the Senate. Gone is neoconservative stalwart former senator Joseph Lieberman, who is now huddled together with former senator Jon Kyl at the American Enterprise Institute, where the two issue regular pronunciamentos lamenting America’s purported retreat from the international stage. Senators John McCain and Lindsey Graham have been upstaged by the likes of Senators Rand Paul and Ted Cruz, both of whom opposed the Syria venture (though the latter has adopted a very hard line on Iran). Paul has distanced himself from his father’s views—“there are definite differences,” in his words—and hailed the containment strategy and realist wisdom of George F. Kennan in a February speech at the Heritage Foundation. Among the Democrats, liberal hawks such as Kerry, Ambassador to the United Nations Samantha Power and National Security Adviser Susan Rice seem to have believed that a second Obama term would permit them to embark upon a new crusade for international norms abroad.

They were mistaken. Public opinion does not back such norms, and Americans will not support going to war for the Kennedy School. The proponents of war often act as though military force is the only tool that America can employ. “The inescapable truth is that only the United States can play cop,” says Richard Cohen. “We have the wherewithal. A further inescapable truth is that evil exists and needs to be fought.” This is dangerously solipsistic, the kind of thinking that imputes a unique moral virtue to the United States. It rests on the easy assumption that good intentions are enough to effect even better results. Yet a right to protect does not always mean that the United States is protecting righteously. 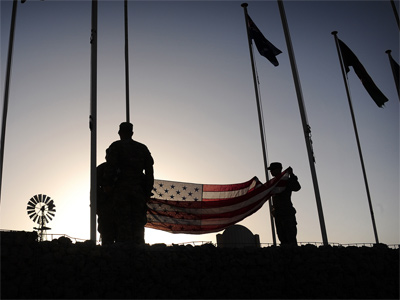 Pullquote: Questioning intervention in Syria is not tantamount to a reversion to the most blinkered isolationist sentiments that percolated on both the right and left before Pearl Harbor.Essay Types: The Realist