In some respects, the 1848 revolutions were nineteenth-century Europe’s equivalent of the Arab Spring. Uprisings that began in the name of freedom and constitutional rights quickly fell victim to other political phenomena. The liberal gains of 1848 were soon lost as the would-be revolutionaries were swatted down by coercive governments who restored their authority or were overtaken by more powerful social forces such as class, religion and nationalism.

The liberal dream of a united Germany under the rule of law was thwarted. In the multifarious states and principalities of Germany, autocrats, monarchists and the landed classes quickly reestablished their control and scattered the revolutionaries into prison or exile. Over the following two decades, Germany was indeed to be united but not by the means that the men of 1848 envisaged. Rather than constitutionalism and representative government, it was the “blood and iron” of the Prussian chancellor, Otto von Bismarck, that forged the creation of the German Empire in 1871.

Nor was this all. In France, the Second Republic was established in early 1848 and the French people were granted universal suffrage. But democracy did not prove to be a vehicle for liberalism, as might have been expected. The people (chiefly the peasants) elected Napoleon’s nephew Louis, who used this mandate to abolish the representative assembly, marginalize the liberals and install himself as emperor in 1852. It was the implosion of the 1848 French revolution that Karl Marx wrestled with four years later in The Eighteenth Brumaire of Louis Napoleon, noting—referring to the resurrection of Bonapartism—that history tends to repeat itself, “the first time as tragedy, the second time as farce.” In Italy, meanwhile, where Rochau also visited, a series of local rebellions were swiftly suppressed.

As Rochau watched the dreams of the liberals dissipate in smoke, he thought it time for some hard thinking. Liberals had to get real. “The castles that they have built in the air have evaporated into blue mist,” he wrote. “A work that had begun with aimless enthusiasm and carried out with an overestimation of one’s capabilities ended in dishonour and injury.”

It was as an antidote to their failure to understand the nature of power and politics that this budding realist invoked the need for a new realpolitik. This was juxtaposed with “idealpolitik,” which had inspired Rochau and his comrades but won them no real gains. “Realpolitik does not move in a foggy future, but in the present’s field of vision,” he wrote. “It does not consider its task to consist in the realisation of ideals, but in the attainment of concrete ends.”

Rochau was far from ready to give up on the ideas he had held so far. In his view, the great achievement of modernity had been to undermine the notion that might is right in politics—or that kings or certain classes had a God-given right to rule because they were strong. But that did not mean liberals could simply dismiss the laws of politics. In making such progress, they had mistakenly assumed that the “law of the strong” had simply evaporated overnight. In reality, this law was as unavoidable as the “law of gravity over the material world.” The foundational truth of politics was the link between power (Macht) and dominance (Herrschaft).

Rather than abandoning his liberalism, he challenged his fellow liberals to think of smarter ways to achieve their goals. They had much to fight for. The regimes that had been restored after 1848 were “anachronisms” because they did not adequately reflect the balance of social forces within German society. The only viable government for Germany, he argued, was one that was constructed around and harnessed the full potential of the Mittelstand (the middle classes). But the intellectual progress made by the Enlightenment had hit the brick wall of reality. To get through that wall, it needed more than ideological purity. When it became “a matter of trying to bring down the walls of Jericho, the Realpolitik thinks that lacking better tools, the most simple pickaxe is more effective than the sound of the most powerful trumpets.”

The strange afterlife of realpolitik showed just how difficult it was for liberals to balance their ideals with a true understanding of means and ends. After Rochau, the concept became entrusted into the hands of the historian and fellow National Liberal politician Heinrich von Treitschke, a virulent anti-Semite—his credo was “the Jews are our misfortune”—who set out to show the German people “how brilliant Realpolitik is.” But Treitschke’s influence—and his ideas of racial struggle and war—represented an increasingly rightward turn in German liberalism. Among the National Liberals, liberal values were increasingly subordinated to the German national cause, which had been seized upon and exploited by Bismarck. Rochau had regarded anti-Semitism as repugnant, absurd and delusional.

Rochau remained a fierce critic and opponent of Bismarck until his death in 1873. Bismarck’s government banned the publication of the weekly journal that Rochau edited in the 1860s. By a strange twist of fate, however, the phrase that Rochau coined became increasingly associated with Bismarck himself. Detached from its original meaning, it was used to describe Bismarck’s brand of practical and ruthless statecraft in the domestic and international arena: his astute management of different social forces within the state and his ability to combine diplomacy with the threat of force. Thus the true meaning of realpolitik began to be drowned out as it was harnessed by conservatives for a very different cause. For those watching the rise of the German nation from outside, therefore, realpolitik soon became a byword for German dastardliness.

FROM ITS German origins, realpolitik seeped into the English language (and the Anglo-American conscience) in two ways, and in two distinct waves. The first was in the slow buildup of Anglo-German antagonism in the late nineteenth century. For Britons, increasingly conscious of threats to their position as the leading global superpower, realpolitik—as practiced by Bismarck and then the kaiser—was an unpleasant and disconcerting discovery. It was taken to imply cynical and uncivilized conduct on the international stage—a lack of respect for the treaties and laws that provided some semblance of order in global affairs and a fetishization of naked self-interest as an end in itself.

The first mention of realpolitik in the English language came in 1872. It was in a translation of an attack on Rochau by the Prussian nationalist Constantin Frantz, who believed that the very notion of realpolitik betrayed the Christian spirit of benevolence that was central to the essence of liberalism. After this, the word was barely mentioned again until the 1890s, when it began to seep into the press with growing frequency, as Wilhelmine Germany became an increasingly aggressive and assertive actor on the international stage. Following Frantz, realpolitik was identified as the source of a sort of gangrene in German philosophy and intellectual life. The traditions of Goethe and Kant, which had been so admired in England, had been marginalized by what seemed to be a neo-Machiavellian obsession with power and the interests of the state.

In 1895, the Times, for example, bemoaned the fact that there were few “survivors of a period when the old-fashioned idealism of the German character had not been superseded by what is now called ‘realpolitik.’” By 1904, as German naval rearmament gained pace, the Fortnightly Review noted how the German state “works exclusively upon a science of self-interest, more definitely methodized than in any other Foreign Office, and applied with more tenacious consistency.”

Not everyone accepted the implication that realpolitik was a uniquely German condition. In 1902, the English radical economist J. A. Hobson published Imperialism: A Study, in which he suggested that the growing ambitions of the great powers—reflected in colonialism and huge military and naval rearmament programs—were all symptoms of the same sickness. It was a

greedy type of Machiavellianism, entitled “real-politik” in Germany, where it was made, which has remodelled the whole art of diplomacy and has erected national aggrandisement without pity or scruple as the conscious motive force of foreign policy.

What Hobson called “earth hunger”—the scramble for markets and resources and the repudiation of treaty obligations—was reflected in the “sliding scale of diplomatic language” and words like “hinterland, sphere of interest, sphere of influence, paramountcy, suzerainty, protectorate.” Even the Americans, too, were being drawn into the imperial game, engaging in what the Germans now called Weltpolitik (world politics).

In India, the philosopher Sarvepalli Radhakrishnan, a future president of the country, echoed Hobson’s views:

Realpolitik, which has for its principle, “It is good when I steal your cow, and bad when you steal my cow,” has been the governing force of European relations all these four or five centuries. Self-interest is the end; brute-force, the means; conscience is taboo.

The Great War, he added, was “the penalty which Europe pays for its steadfast loyalty to a false ideal.”

OF ALL THE great powers, America came late to realpolitik. It was, after all, in Rochau’s pithy description, one of those nations that “have hardly stepped out of the shoes they wore as children.” Before its entry into the Great War, America was often chided in the English press for its lack of understanding of the true nature of realpolitik, much as Rochau rebuked his liberal colleagues for their naïveté about the nature of politics after 1848. 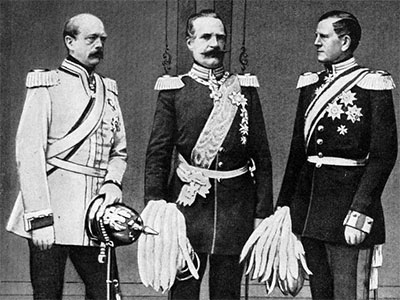