SINCE EGYPTIAN president Hosni Mubarak was pushed aside on February 11, 2011, many U.S. academics and policy makers have issued warnings, reassurances and speculations on the question of how relations with Egypt will be affected by the rise of its largest opposition movement, the Muslim Brotherhood. True to expectations, the Brotherhood did well in the first post-Mubarak parliamentary elections, with its Freedom and Justice Party (FJP) collecting almost half of the seats in the new People’s Assembly. The biggest election surprise, however, was that its greatest rival was not one of Egypt’s many secular parties, all of which did poorly, but rather another set of Islamists—the Salafi Islamist bloc won almost a quarter of the seats.

This surprising Salafi showing stirred many Egyptian liberals and international human-rights activists to warn that the Salafis, if given any power, would curtail the rights of women and non-Muslim minorities, particularly Egypt’s large Coptic Christian population. For the United States, the potential consequences of the Salafi rise are also profound. In some circles, the label “Salafi” is understood to mean one particular stream of Salafism championed by Ayman al-Zawahiri (an Egyptian), Osama bin Laden’s successor as head of Al Qaeda. And indeed, some of the Salafis in politics once were jihadis. Even if the Salafis are not all closet jihadis, they are feared because of their unrelenting hostility toward Israel, harsh stance on women’s and minority rights, rejection of democratic principles and general anti-Americanism. The Brotherhood presents itself as a group of pragmatic, kinder and gentler Islamists. The Salafis do not.

Thus, a big question hovering over events in Egypt is how a strong Salafi influence there will affect U.S. interests in the region. Recognizing the concerns of the international community, the leadership of the largest Salafi party has gone out of its way to strike a pragmatic tone on foreign-policy priorities. However, it is hostile to U.S. military actions in the region and opposes U.S. counterterror measures and support of Israel. Tensions on issues such as minority rights also seem likely, as the primary Salafi focus is on domestic political and social issues. Perhaps most worrisome, many of the problems the United States has with the Salafis reflect mainstream Egyptian public opinion. Hence, far from being radical outliers, Egypt’s Salafis represent a kind of barometer on the thinking of significant elements of the country’s population, and any democratic leaders will take these feelings into account. As most U.S. interests in the region will not—and should not—change, the United States will only be able to offset some of this criticism, and often we simply must anticipate problems. Ideally, areas of disagreement should not be put at the center of the U.S.-Egyptian relationship.

THE SALAFI movement gets its name from the Arabic al-salaf al-salih (the worthy ancestors, or venerable forefathers), which refers to the early generations of Muslims, “who had first-hand experience of the rise of Islam and are regarded as exemplary for the correct way to live for future Muslims,” in the words of author Roel Meijer. Though they are not inherently antimodernity, Salafis strive to emulate the Prophet Muhammad and maintain a literalist reading of the Koran and the traditions of the Prophet. Historically, Salafis have focused more on personal behavior and less on politics.

There is no centralized international Salafi leadership, and Salafi practices may differ regionally, by country, within individual countries and even (or especially) among the followers of different Salafi preachers within a city. Particularly important to Salafis are charismatic religious leaders, and divisions often occur due to personal rivalries masquerading as doctrinal disputes.

The Sharia Assembly was created as a Salafi association in Egypt in 1912—sixteen years before the founding of the Muslim Brotherhood. However, Salafism really took off in the 1970s and 1980s with the return of Egyptian laborers from the Arabian Peninsula, specifically Saudi Arabia. The Saudi legal system is based on Wahhabi doctrine—perhaps the most well-known Salafi movement—and both the government and wealthy Saudi individuals export Wahhabism across the ummah (Islamic community) by funding preachers, building mosques and spreading Salafi religious materials.

Egyptian government policy also fostered the spread of Salafism. While Islamists faced many restrictions and brutal treatment at the hand of Gamal Abdel Nasser’s government, his successor, Anwar Sadat, lifted the lid and portrayed himself as a pious leader in hopes of using the Islamists to counter the strong Nasserist current. However, his relations with Islamists soured because of his refusal to implement Islamic law, his close ties to Washington and his peace deal with Israel. Radical Salafis, some of whom were linked to a young jihadi leader named Ayman al-Zawahiri, assassinated Sadat in 1981. One assassin declared, “I have killed Pharaoh.”

The Sadat assassination led to ferocious repression of many Salafi groups. The level of repression rose and fell during the Mubarak years, but the regime kept a heavy hand on Salafi organizations if they showed any political inclination. As a result, many Salafis focused their activities on preaching and community service, trying to Islamicize society from the bottom up. The Mubarak regime encouraged this, hoping to use apolitical Salafis to counter the influence of the more political Muslim Brotherhood.

As Georgetown University’s Jonathan Brown argues, Egypt’s Salafi movement split three ways in its reactions to last year’s January 25 revolution. When the uprising began, most Salafi leaders backed Mubarak and condemned the demonstrators. However, as the demonstrations progressed and the government became more repressive, some Salafi leaders criticized the government’s actions against demonstrators. Meanwhile, another Salafi contingent remained silent.

The revolution offered the Salafis both a challenge and an opportunity. Salafi groups long have criticized democracy as an invention of man, whereas God’s law should rule. Fallible humans should not be allowed to sanction or encourage un-Islamic activity and justify it in the name of the people’s will. So Salafis in most of the Arab world had been politically quiescent—a decision that the lack of political opportunities and regime repression reinforced. After the revolution, however, many Salafis realized that by not participating in elections, they would miss an opportunity. Shortly after Mubarak’s fall, Salafi movements and the Muslim Brotherhood mobilized their followers to support a constitutional referendum to protect an Islamic space in society and stop secular activists from controlling the process. Other Salafi groups such as the Salafi Call saw the revolution as an opportunity to implement an Islamic society from the top down. Salafi organizations ran candidates in Egypt’s first post-Mubarak parliamentary elections, hoping Salafi members of parliament would be able to influence Egypt’s political system for years to come, either by protecting the current status of Islam in Egypt’s governance or strengthening Islamic rule by clarifying ambiguities and codifying sharia.

The Salafis did unexpectedly well in the elections. Their local organizations mobilized followers effectively, as did their charismatic leaders. They appealed to poorer Egyptians, in contrast to the more staid and middle-class Islamists associated with the Muslim Brotherhood. They probably also appealed to many Egyptians who accepted the Brotherhood’s mantra that “Islam is the solution” but saw the Salafis, not the Brotherhood, as the standard-bearers for religion.

Because Salafi views on democracy are evolving and inconsistent, and because some still consider the movement undemocratic, it remains unclear where its participation in elections will lead. Salafi political parties may run candidates in this one election to protect the status of Islam in Egypt or to lay the foundation for an Islamic state. They may seek to legislate an end to democracy itself. Or they may become accustomed to democracy and continue to run in future elections as parties that will work for and uphold Islamic ideals. Whether they would surrender power, particularly to secularists or others they deem “un-Islamic,” is also an open question. Indeed, Salafi groups themselves are unclear on their future role.

THE SALAFI parties abandoned the Democratic Alliance, dominated by the Brotherhood’s Freedom and Justice Party, to form the Islamist bloc in November 2011, with the political party of the Salafi Call, Al Nour, as its main component. The Salafi Call is Egypt’s largest Salafi movement. Omar Ashour of the University of Exeter notes that Al Nour and the Salafi Call have a political jump on other Salafi parties and movements because of “their long organizational and administrative experience and their charismatic leaders.” The Asala Party, a far smaller Salafi party that joined the Islamist bloc, in contrast, has a support base limited to the Cairo area. These formal parties are supported in turn by the Salafi front, a coalition of different Salafi strands that claims it will do whatever is necessary to solidify the role of Islam in society.

The most troubling component of the Islamist bloc is the Building and Development Party, the political wing of Al Gamaa al-Islamiyya (GI). The GI was one of Egypt’s most notorious terrorist groups in the 1980s and 1990s, with its members responsible for attacks on Egyptian government officials and Coptic Christians as well as the 1997 tourist massacre in the Egyptian city of Luxor. Although the GI formally renounced violence in 2003 (and began its recantation well before then), the group remains on the U.S. State Department’s list of foreign terrorist organizations. Indeed, the founder of the Building and Development Party is Tareq al-Zomor, who was released from prison in March 2011 after serving around thirty years for planning Sadat’s assassination. Nevertheless, the party insists it has “accepted the principles of political pluralism and has renounced violence.” The GI’s terrorist past did not preempt its party’s approval. 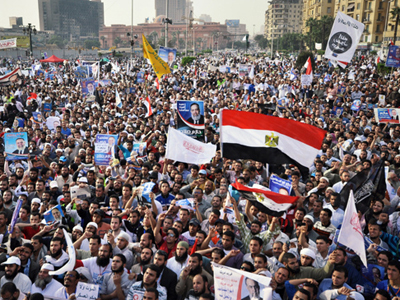 Pullquote: As the largest and most politically vibrant alternative to the Brotherhood, the Salafis will project their influence at least indirectly in all parliamentary action.Essay Types: Essay