LAST YEAR, during his visit to the United States, Chinese president Xi Jinping introduced the idea of a “new type of great-power relationship.” In March of this year, in apparent response, President Obama’s national-security adviser, Tom Donilon, suggested an interest in building “a new model of relations between an existing power and an emerging one.” This June, the two presidents met in California to explore whether their strategic outlooks can be reconciled.

I suspect that President Xi’s concept reflects the senior leadership’s study of history. At last year’s meeting of the U.S.-China Strategic and Economic Dialogue, former president Hu Jintao stated, “We should prove that the traditional belief that big powers are bound to enter into conflict is wrong, and [instead] seek new ways of developing relations between major countries in the era of economic globalization.”

In the United States, professors Graham Allison and Joseph Nye at Harvard have referred to this challenge as “the Thucydides trap”: in explaining the cause of the great Peloponnesian War of the fifth century BC, Thucydides pointed to the rise of Athens and the fear it inspired in Sparta. In the centuries since, scholars have pondered how power shifts have led to competitive tensions, which sometimes have been managed and sometimes led to conflict.

This essay will pose a question: What might be the substance of a new type of great-power relationship between China and the United States?

Kevin Rudd, former prime minister and foreign minister of Australia, has also taken up this topic in a series of thoughtful speeches. His approach points to the need for reinforcing dialogues and cooperative efforts.

I will complement Rudd’s observations by suggesting specific policies that could forge this new type of relationship. I will focus particularly on economic and security issues, as well as on impediments that China and the United States need to address.

In 2005, I suggested that the United States should encourage China to become a “responsible stakeholder” in the international system that had provided a supportive context for China’s extraordinary modernization and economic rise. Deng Xiaoping had shrewdly recognized that China’s opening could capitalize on the existing international system of trade, investment, technology, growth and security. Through the hard work of China’s people, Deng was proven correct.

Yet the international system of the late twentieth century has to evolve with new times. Responsibilities for preserving and extending systemic interests—and adapting to new challenges—need to be considered as part of great powers’ national interests. The United States, China and others will not be able to adapt to an evolving system successfully, however, if they do not share a basic commitment to that international system.

Some observers believe that China has acted like a “reluctant stakeholder,” especially when it comes to translating common interests into complementary policies. In speculating why, they have asked: Is China still debating or adapting to its role? Or, as some voices in China suggest, does China want a new system? If so, what would it look like? Does China want to add different ideological content to international relations—which would represent a shift from past Chinese policy?

These uncertainties have prompted another important query: Have Chinese critics of the current international system considered the costs of, and others’ reactions to, new Chinese aims? Not surprisingly, these questions are arising most prominently in the Asia-Pacific region.

Therefore, in considering a possible new type of great-power relationship, we need a serious, in-depth exchange about whether China and the United States share common systemic interests—as well as about specific policies. Interdependence, by itself, will not overcome twenty-first-century problems and threats. We need to consider how economics and security interconnect in today’s foreign policy.

But the United States still accounts for about 22 percent of global GDP. Although productivity gains are harder to achieve as advanced economies move to the technological frontier, recent American innovations in energy, software and business models reveal a developed economy that retains an unusual capability to adapt and revitalize itself. In contrast to most other advanced economies—and even many developing ones—the U.S. demographic outlook is modestly positive. U.S. integration with its North American partners also offers good prospects.

Yet a host of global structural shifts, in particular the rapid rise of developing economies, along with the stumbling global revival from the Great Recession, necessitate more changes for China, the United States and the world.

China’s developmental challenges are described well in last year’s “China 2030” report prepared by the Development Research Center of the State Council along with other Chinese ministries and an international team from the World Bank Group.

The researchers sought to address the basic problem of how China could avoid the so-called middle-income trap—the tendency for productivity and growth to slow after developing economies reach middle-income levels. Our Chinese colleagues wisely recognized that straight-line growth projections rarely come to pass.

Consider this problem in historical perspective: when the World Bank reviewed the performance of 101 economies that the Bank categorized as middle income in 1960, it discovered that by 2008—almost fifty years later—only thirteen had made it to high income. And one was Greece!

China has relied heavily on investment in fixed assets, principally by the government, and on export-led growth. China will need to adapt to global structural shifts: now that developing economies account for half of global output—and indeed about two-thirds of global growth over the past five years—China can no longer base its growth model principally on sales to developed economies.

China needs to change its growth model to rely on greater domestic demand and consumption—as well as on a greater role for the private sector. Investment in human capital will be of increasing importance, as will the encouragement of the innovative spirit of China’s talented people. This shift could also enable more Chinese to benefit from their decades of diligence; in doing so, increased consumption might ease social tensions as well.

The “China 2030” report outlined a pathway to a new growth model that would include: completing the transition to markets for land, labor, enterprises and financing; moving to an open innovation system, so as to enable China to move up the value chain; offering equal opportunity and basic social protections to all Chinese; restructuring fiscal systems to match accountability for revenues and expenditures at various levels of government; cleaning up the environment and pricing resources for scarcity; and considering the international implications of China’s structural shifts.

I do not expect China’s new leaders to act through any kind of “Big Bang” reform. I do think they—and provincial leaders—will pursue pragmatic experimentation. Prime Minister Li Keqiang has pointed to urbanization as the portal through which China can pursue connected change, combining issues of labor, land, enterprises, education and other services, consumption, living standards, new infrastructure, housing, sustainability, financing and governance.

Yet China’s next reform push will be difficult. The Chinese leadership will need to balance a near-term growth strategy, relying principally on the current economic structure, with the need to change that structure for future growth.

A NEW type of great-power relationship would anticipate the economic and even institutional changes that lie ahead. China and the United States should identify mutual interests in supporting structural reform and “rebalancing” in both countries.

Consider what a search for a new, cooperative economic approach might entail:

• For example, to boost productivity, create jobs, expand entrepreneurial opportunities and increase consumption, China needs to open competition in the services sector. The Chinese private sector should expand its role. In addition, U.S. and other foreign businesses and investors can bring know-how, technologies and global connections to support an expanded Chinese services sector. This cooperation can help alleviate trade imbalances and frictions while promoting mutual interests.

• Stronger but flexible social safety nets in China could draw from international experience with insurance, savings and delivery of service models. The United States, in turn, needs to address the costs, financing and incentives of its older and much more expensive safety nets.

• There are mutual opportunities in the energy and environmental sectors—including lower-carbon sources, alternative technologies and systems, and experience for clean air, water, biodiversity and land use. 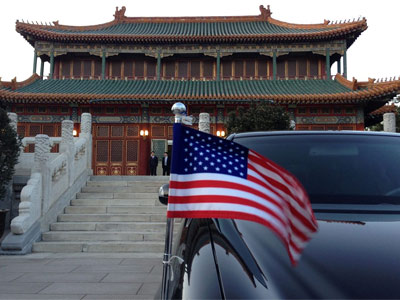 Pullquote: The current dialogue has taken up important topics, but too briefly, too infrequently and with limited engagement at the highest levels, where strategic decisions are likely to be made.Essay Types: Essay