‘The Queen’s Gambit’ Lures Viewers with a Post-#MeToo Utopia 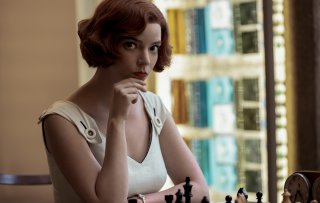 If you haven’t heard already, The Queen’s Gambit on Netflix is a phenomenal success. After its release last October, it became the No. 1 Netflix show in 63 countries and has prompted meteoric increases in the sales of chess sets and books. At this year’s Golden Globe Awards, it won for best limited series or TV movie and its star, Anya Taylor-Joy, won for best actress in the same category.

The show is largely set in the 1960s and recreates a captivating esthetic from that decade. The hero is Beth Harmon, a young chess prodigy who, despite time in an orphanage and an addiction to prescription drugs, enters and eventually conquers the world of chess — one that is inhabited entirely by men.

Some viewers and commentators have revelled in what is absent from Beth’s trajectory: toxic masculinity and sexual violence. Aside from hostile looks and gruff responses from the over-confident men she defeats early on, Beth is surrounded by a community of male allies who train her in chess and provide emotional support, allowing her to fulfil her potential.

Beth’s birth and adoptive mothers have their ambitions and ultimately their lives cut short by gender-based limitations and the ensuing damage. By contrast, Beth inhabits a parallel, post-#MeToo society. Beth’s post-#MeToo world is worth celebrating — but the way the show imagines it won’t make it any easier for us to achieve.

From our perspective as scholars who have studied social criticism generated by the Frankfurt School for Social Research, shows designed for mass popular appeal always contain ideological and utopian components. This is especially true in post-Second World War advanced or late capitalist societies, where participating in mass consumer culture is perceived to be an authentic source of individual freedom and identity.

Leading Frankfurt School figures from the middle of the 20th century, such as Max Horkheimer and Theodor Adorno, emphasized that one way ideology functions is to distort social reality. Such distortions often misrepresent society’s pathologies as problems that do not need to be solved through collective political action.

For example, in The Queen’s Gambit, overcoming addiction is presented as a matter of will power. Beth’s reliance on prescription drugs (and later alcohol) helps her to visualize chess at an elite level but leaves her, briefly, at rock bottom — until an old friend appears at her doorstep and helps turn Beth around simply by urging her to live straight.

Meanwhile, the sexism Beth experiences is real yet somehow inconsequential. There is no harassment, no assault, no doors that won’t open or ceilings that won’t shatter. Given the absence of persistent social complications, it is little wonder that Beth lacks a political consciousness in a time when second-wave feminism was taking off as fast as the Beatles.

If Beth’s path to the top seems historically implausible, what helps to keep viewers’ interest? This is where a show’s utopian features can compensate. Few people would watch any scripted drama that did not have something that acts as a lure, something that many viewers do not have but that they want. Utopia functions here as a critical reflection on what exists.

In this case, especially for women, the utopia is the (unbelievable) meritocracy that Beth enjoys. From the janitor who teaches Beth chess at her orphanage, to the state and national champions she defeats, these men experience her talent as a revelation. Their initial skepticism turns into astonishment and then reverence. These “conversions,” so to speak, that the men experience, are bewildering because they misrepresent men both then and now.

The Queen’s Gambit may at first appear to trade on nostalgia by recreating a past that never existed. But nostalgia of this type is inherently conservative, appealing to people’s sense of the familiar and their desire for apparently simpler times during periods of disruption. Much more than a nostalgic reimagining of gender relations in the 1960s, this show is in fact forward-looking. It offers a utopian vision of what women’s lives could be if all men were good.

Crucially, however, we must always be alert to whether the utopian aspect of any show misrepresents social reality in a way that has detrimental political consequences. In this case, the show presents a neo-liberal vision of how radical social change occurs: the notion that self-interested individuals have free agency and can easily adapt their behaviour independent of social relations or the institutions of our society.

This particular utopia suggests what women need to succeed is for individual men to be good, to overcome the all-too-typical moral failings that sexism involves. But this amounts to moralism by implying that the primary means to progress, including gender-based equality, involves correcting the defects in specific people rather than reconstructing the institutions in which individuals are rooted. The illusion of meritocracy succeeds because Beth ends up living apart from major institutions in which male domination is reproduced: the family, the school, the workplace.

Also, very few women (or men) are like Beth, who is exceptional. Can everyday women expect men in their lives to dramatically revise their sexist attitudes like the men surrounding Beth? The #MeToo utopia answers: Why shouldn’t they?

Utopia means “no place,” not necessarily forever, but at least for now. What men need to do is recognize women as possessing equal dignity — and exceptionalism is no requirement for this. What is required is to reconstruct the power dynamics inside the institutions that we all inhabit. Good men can help, but more of them have to be made. Until we can radically transform human relations within the family, the school and the workplace, too many women will need to find ways to be exceptional.

Elizabeth Vlossak is an Associate Professor of History, Brock University

Why Top-Level Chess is Still a Boys' Club