100,000 Bayonets Cut to the Core of the Pentagon’s Spending Problem 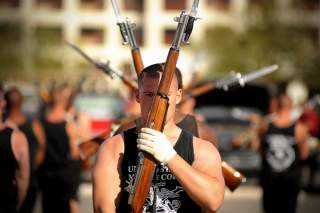 Just the other day, I noted how outgoing Air Force procurement chief Bill LaPlante has been insisting that the Pentagon’s business of buying weapons has been improving over the past few years. Not everyone, however, is equally moved. On November 18, at our event on “The Space Race in Business,” Jay Gibson of XCOR told of how he had recently brushed off entreaties from the access-to-space-vexed Pentagon. “I’m not interested in doing business with you,” he told the Building, “but after I’m commercially successful, call me, and I’ll do business on a FAR 12 basis with you.” Gibson was referring to the chapter of the Federal Acquisition Regulations on commercial items, and space flight increasingly qualifies. That got me thinking about three recent cases of procurement and non-procurement of much more quotidian systems—bayonets, pistols, and armored trucks—and what they tell us about the relative burden of administrative overhead for companies big and small in military procurement.

Bayonets. Back in 2010, the U.S. Army stopped training with bayonets. Lieutenant General Mark Hertling, head of Training and Doctrine at the time, said that he was just seeking to make training “relevant to the conditions on the modern battlefield.” After all, as his spokeswoman put it then, the “last time the US had a bayonet assault was in 1951.” When the Army announced its change, a spokesman for the Marine Corps insisted that its recruits would continue to “have to go through a whole checklist of bayonet drills, including slash techniques,” because the blade was “still relevant for us in Afghanistan.” The Marines may have remembered how, in May 1982, the Scots Guards had assaulted the Argentines on Mount Tumbledown with bayonets. Indeed, in 2002, the USMC launched a program to procure new bayonets. After testing 33 entries over the next year, the Corps selected the OKC-3S, and bought over a hundred thousand. Bayonets continued to be occasionally vital, at least for the British Army. In May 2004, a few soldiers of the Princess of Wales' Royal Regiment relied on their bayonets to break up an ambush in Basra. In July 2008, an officer of the Royal Regiment of Scotland killed a Taliban fighter with his bayonet. In Afghanistan in 2012, a patrol of the Princess of Wales’s Royal Regiment would again successfully charge through an ambush with theirs.

Pistols. Pistols get used a little more often. Over the past fifteen years, an American general recently told me, troops have had to shoot their enemies with their Berettas somewhat more than a hundred times. The Army has long been unsatisfied with the lethality of the 9 mm, and so launched some years ago a replacement program. At the Reagan National Defense Forum last month, Pentagon procurement chief Frank Kendall lamented how this has now tragically jammed his inbox. Scores of West Point classmates (Class of ’71) have been lambasting the 351-page request for proposals (RFP) that the Picatinny Arsenal recently released. Bob Owens of the website BearingArms called the document “a trainwreck.” After West Point and the Army, Kendall earned graduate degrees in law, business, and engineering, so he’s knows that no one chooses to run a purchasing organization this way. All that paper, he insisted, was needed simply to comply with all the statutes the Congress has piled onto the military acquisition process in the interests of fairness, transparency, and ensuring that civil servants aren’t stealing money. Stephen Goldsmith—professor of government at Harvard, and former mayor of Indianapolis and deputy mayor of New York—once wrote of his own experience with that kind of administrative burden. “We used standard government accounting principles,” he wrote in Harvard Business Review back in 1997, “that prevented our managers from stealing money, but we did nothing to stop them from wasting it.” Writing 350-page RFPs—for pistols—and requiring every would-be bidder to read through them, is a terrible waste of time and money.

JLTVs. As Ellen Mitchell of Inside Defense reported in late October, Kevin Fahey, the Army’s director of system-of-systems engineering and integration, has offered an interesting idea for how to decide whether to recapitalize some of the service’s tens of thousands of armored Humvees. The alternative, of course, would be staying the course with the full program to buy tens of thousands of Joint Light Tactical Vehicles (JLTVs). If JLTVs seem expensive at $399,000 each, the much-less-sturdy armored Humvees would still cost about $180,000 each. Fahey thinks that the Army should resolve not to spend more than $100,000 each, “and then go out to industry and say, what can you do? To me that would be the best, almost like JLTV. Then you would have a competitive bid, have three guys run the hell out of it and then pick one.” JLTV was indeed competitive, but it’s notable that the RFP, excluding annexes, ran to about 350 pages too. Oshkosh and AM General and Lockheed Martin could afford to deal with that complexity. Smaller companies couldn’t, though it’s the rare smaller company that’s successful as an automotive assembler. Here then, the administrative burden is absolutely comparable, just not so relatively burdensome.

What do these three cases tell us about the problems of procurement? That the sclerosis is not scalable. It’s binary, and too often, one-size-fits all. Armored trucks in Iraq and Afghanistan saved lives almost every day in those campaigns, so the attention paid to both emergent and carefully crafted procurement programs was warranted, whatever the bureaucratic overhead. Just remember that back in 2005, the promise of the JLTV was held up as the reason that the MRAP should be foregone. Bypassing that resistance took not just an alternate pathway, but a total short-circuiting of the system, in which the defense secretary nearly set himself up as the program manager. Bayonets are fixed not even annually, so it’s not surprising that neither the Marines nor the British Army have a 350-page RFP on the street for a new short sword. Pistols dispatch enemies maybe monthly, so some concern is understandable, but the burden is then comparatively outrageous. The particular problem is that there’s hardly a middle path in procurement.

What might that be? A two-page RFP for an armored truck wouldn’t do the job, and bayonets, I suppose, really aren’t commercial items. But could pistols be bought under FAR Part 12? According to the Bureau of Alcohol, Tobacco, and Firearms, manufacturers in the United States produced over four million handguns in 2012 (the last year for which statistics are available). That sounds like a bunch of companies have on-the-shelf items backed by ongoing development programs and hot production lines. Or here’s another crazy idea. Treat pistols like running shoes—another very personal item where one size doesn’t fit all. Give the troops vouchers, and then let them pack whatever they want, just like some police still do. Either way, as Byron Callan wrote in Aviation Week the other day, the Pentagon needs to figure out how to be not just a more powerful buyer, but a better customer for the suppliers it casually exasperates.