5 Things Joe Biden Can Do to Win the Presidential Debates 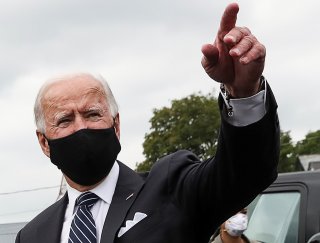 The first time President Donald Trump and Democratic presidential nominee Joe Biden will take the debate stage is nearly two weeks away—and it looks like Biden may see a defeat under the national spotlight.

According to a poll conducted by USA TODAY/Suffolk University, 47 percent of respondents predicted that Trump will win the presidential debates, while 41 percent said the same about Biden. The former vice-president has been known to be a weak debater, as his performances were broadcasted during the Democratic primaries.

Trump, however, uses strategies of aggression and wants to reiterate his “Sleepy Joe” narrative that would frustrate his opponent, but also has noted that he doesn’t plan on practicing at a single mock debate.

Although debates don’t have much of an impact in swinging voters, they do tend to boost voter knowledge and confirm party positions. As Trump has a strong debate presence, it’ll be crucial for Biden to win the upcoming presidential debates if he wants to land a spot in the Oval Office in November.

Here’s what he can do to win the presidential debates.

During the first night of the Republican National Convention, speakers painted a picture of a world where the Democratic party wants to defund the police. Reps. Steve Scalise (La.) and Jim Jordan (Ohio) firmly stated that Biden yearns to defund the police and allow “the mob” to take over America’s streets.

This rhetoric was echoed throughout the night, as speeches were filled with anti-Biden talk and how the radical-Left plans to wipe out all Republican sentiment as they move to abolish law enforcement. Although some progressive Democrats have called to defund the police, Biden has not.

“No, I don’t support defunding the police,” the former vice-president said in an interview with CBS Evening News. “I support conditioning federal aid to police, based on whether or not they meet certain basic standards of decency and honorableness. And, in fact, are able to demonstrate they can protect the community and everybody in the community.”

According to Vox, Biden’s police reform plan “would actually increase the number of police officers in Black and brown communities. He wants a $300 million investment in the Community Oriented Policing Services (COPS) program, which he helped spearhead in the 1990s, to reinvigorate community-oriented policing.”

Despite Biden’s anti-defunding the police stance, Trump and his supporters have emphasized that Biden hopes to wipe out the police force and create more social and political unrest in America’s major cities and suburbs. At the presidential debates, Biden must clarify this position, as some undecided voters might believe the GOP’s persistent communication that the former vice-president wants to defund the police.

Not a Socialist Candidate

Biden’s decision to choose Sen. Kamala Harris (D-Calif.) as his running mate for the upcoming election “breaks the trend.” In the past, other Democratic candidates—including Hillary Clinton and Barack Obama—selected vice-presidents that embrace more right-leaning ideology and identity than the politician at the top of the ticket.

There’s no question that Biden is shifting more Left after serving as the vice president under the Obama administration, but he’s not becoming a socialist. Although Harris is known to be one of the most liberal members of the Senate in the last three years, according to DW-NOMINATE system that tracks the ideology and legislative actions of the different members of Congress, Biden chose her welcome diverse ideas to his platform and rally a Left base that he couldn’t have obtained by himself.

His decisions as the Democratic nominee have pushed his agenda to the left—with his views on climate change being at the forefront of his most Leftist ideology—but he’s not seen as a radical or a socialist. Members of the GOP have boasted that Biden will pave the path for an even more socialist candidate to take over the federal government in the future.

According to polls, however, 26 percent of voters think Biden is a moderate candidate, while only 15 percent see Trump as one. At the presidential debates, Biden needs to highlight this—that yes, his agenda is more progressive, but his administration is willing to accept diverse and new ideas of how to operate the federal government, unlike Trump who champions radical rhetoric.

Leadership During a Pandemic

When the coronavirus struck the United States at the beginning of the year, top White House officials told Trump that this would be the most challenging and life-threatening issue he’ll have to face as president. Despite hearing this news early on, Trump downplayed the severity of the coronavirus—which he admitted to doing in recently released recordings with journalist Bob Woodward—and never created a definitive, federal plan to lead the country to health and economic recovery.

Biden can use this against Trump at a debate.

During Obama’s presidency, Biden gained experience on how to operate in a time of national crises. Hit with the swine flu and then later Ebola, Obama and Biden worked with constant pressure from the media, as outlets said it was perhaps the deadliest pandemic in U.S. history.

When the swine flu expanded to the country’s borders, Biden encouraged Americans to stay home and remain isolated from any potential exposure to the threat of the deadly flu. Obama’s team “quickly adapted to the situation” and met the medical needs to successfully respond to the pandemic including distributing emergency equipment from the nation’s stockpile, coordinating with public health experts and communicating to the public the brutal, honest truth.

Biden can utilize these experiences and bring them on the debate stage to challenge the incumbent president about how to handle a pandemic. Although he didn’t lead the response, he argues that he “took the threat of a pandemic very seriously.”

Back in May, headlines shouted that Biden’s staff donated to a group that bails out jailed Minneapolis protesters who have destroyed the city. But, there is no evidence to prove this.

As a whole, Biden’s campaign didn’t push to endorse this type of violent behavior, as the former vice president has spoken out against the brutal protests that erupted after the killing of George Floyd. Instead, “several campaign staff members did donate their own money to a Minnesota nonprofit that pays the bail for low-income individuals. But the campaign itself did not donate the money and there is no evidence for the $20 million figure,” according to PolitiFact.

When PolitiFact asked about the accusation against Biden’s campaign, a campaign official said that “‘staff members exercised their First Amendment right to donate to the Minnesota Freedom Fund, on an individual basis.’”

Some Republicans interpreted the bail as Biden protecting violent protesters. This is completely false. Biden has actually made public anti-violence statements and rejects cash bail in his justice platform. On the debate stage, this serves as another issue that’s been misrepresented and manipulated in the press, as the Democratic nominee won’t bail out violent protesters, but it was, in fact, some of his individual staff members who decided to bail some of them out.

Trump will likely interject Biden’s argument if the incident were to rise, arguing that Biden will endorse the radical-Left and encourage unlawful protests that deal with policing and racial injustice issues.

Trump’s work towards the Israel-United Arab Emirates (UAE) deal was something his administration has seen as a substantial achievement. The initiative earned the president a 2021 Nobel Peace Prize nomination as he’s played a vital role in “facilitating contact between conflicting parties and . . . creating new dynamics in other protracted conflicts,” according to the nomination letter.

The agreement has encouraged Israel and the outer ring of Arab states to negotiate, while also motivating Palestinian flexibility by denying the power to the Palestinian Authority to “veto over other Arab leaders’ policies toward Israel.” It includes Israeli annexation of the West Bank, which was approved by the president but has temporarily been put on hold. In a Biden administration, however, the annexation “would not be on the table.”

As noted by reporter James Phillips, “The new agreement makes public the expanding strategic, economic, and diplomatic cooperation behind the scenes between Israel and the UAE. Both countries consider Iran to be their chief threat and were motivated to explore secret contacts by strong opposition to the Obama administration’s flawed nuclear deal with Iran.”

Biden, on the other side of the aisle, wants to “undo damage” done by the Trump administration, and the peace deal may be included. Biden’s campaign has said the former vice president wants to return to the “traditional” U.S. role in forming two separate states for Israelis and Palestinians, despite avoiding the issue as it's become on the backburner due to the pandemic's current needs. He “supports the creation of an independent Palestinian state alongside Israel,” according to the Los Angeles Times.