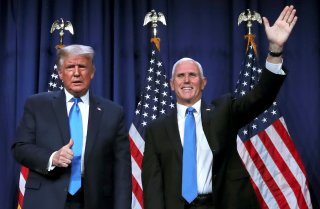 President Donald Trump’s coronavirus diagnosis has made the vice-presidential debate one of the most important election-related events for the 2020 campaign season.

Trump and Democratic nominee Joe Biden went head-to-head on the debate stage last week in a night filled with utter chaos, as insults and jabs flooded the night. Days after the debate, Trump tested positive for the coronavirus and was admitted to Walter Reed Military Medical Center, where he’s received an experimental drug cocktail to mitigate the virus’s deadly spread. His test results, however, spark uncertainty over whether he and his political opponent will face a second match in the political boxing ring.

That puts the vice-presidential debate at the forefront of the final campaign sprint for both candidates. Vice President Mike Pence and Sen. Kamala Harris (D-Calif.) are slated to debate Wednesday night in Salt Lake City, Utah, a night that can also offer a foreshadow of presidential candidacy.

With pressure looming over Trump’s campaign as the election is less than a month away and overall disapproval have hit record-setting numbers, Pence’s debate performance will be critical for the president’s re-election bid. Here are some ways Pence can win the Veep debate and help boost the Trump campaign during the last few weeks until the election.

A resilient and strong economic message has topped the Trump-Pence ticket since the 2016 presidential campaign.

Four years later — Trump has touted his accomplishments in office, as his administration earned record unemployment numbers, boosted wages and stock market gains. But the economy has taken a tailspin, with the unemployment rate reaching the double-digits at its peak in April and businesses across the country shuttering doors permanently. The nation is amidst a widespread recession that could have a devastating economic toll for the next two years.

Although the country is seeped in an economic downturn, Trump’s approval on handling the economy is higher than that of Biden’s. Considering general election poll figures with the president trailing behind his political opponent, the economy will likely come up at the vice presidential debate — a topic that Pence, if argued effectively, could win over some key voters.

“As our economy is beginning to stand back up, as we’re putting millions of Americans back to work, you need to ask yourself, who do you trust to rebuild this economy, a career politician who presided over the slowest recovery since the Great Depression? Or a proven leader who created the greatest economy in the world?” Pence said at a campaign rally in Pennsylvania in September, referring to Biden.

At the debate, Pence must focus on restoring the pre-coronavirus economy that the Trump administration maintained for three years. Rather than attempting to respond to the current state of the economy, the vice-president must propose a plan for the future to rebuild employment, small businesses and the stock market. During Pence’s campaign trail in recent weeks, the vice-president has traveled to working-class areas that were hit hard by the coronavirus pandemic’s impact on the economy. He’s spoken to localities who yearn to get back in the workforce. Pence can refer to these stories and examples as a tool to win over viewers’ support in promising to reinstate the dwindling economy — a goal that’ll only happen if Trump wins his re-election bid.

One of the president’s weak spots heading into the election that’s less than a month away is his handling of the coronavirus that’s killed more than 210,000 Americans. As head of the White House coronavirus task force, Pence must form an effective and powerful rebuttal to Trump and his own mismanagement of the deadly disease.

Since the start of the pandemic, Trump has outwardly downplayed the threat of the coronavirus, as he noted it was “under control” and would inevitably “go away.” As the country faces a potential second wave of the infection, the coronavirus will remain a top priority for voters participating in the upcoming election, especially with the president being infected.

During Pence’s time as chairman of the task force, he welcomed the help from public health officials to join the force in guiding the country out of the crisis. Pence has embraced all of the resources and tips from health officials to effectively respond to the pandemic, an initiative that’s often gone unnoticed amid the major crises boiling the nation.

At the debate, Pence must capitalize on these accomplishments in the White House and boast that the country would have been far worse off if the Trump administration didn’t shut down the economy at the onset of the pandemic. The vice-president can argue that he and the president acted in the best way to respond to a crisis at this scope, by delegating responsibility to governors, so that each state’s corresponding response would be more laser-focused on tackling the spread at the state level, with the help of federal funding for widespread testing efforts and effective medical supplies.

A new area of concern — Trump testing positive for the coronavirus — has raised concerns about Pence not quarantining, as he’s come into close contact with top White House aides that have been exposed to the virus. According to the Centers for Disease Control and Prevention guidelines, it is encouraged to quarantine for up to 14 days after coming into close contact with someone who has contracted or has been exposed to the novel coronavirus. Pence, however, will not be quarantining since he tested negative for the infection. The vice-president must loop back to the fact that he tested negative and will continue to act safely to avoid any potential exposure.

On the forefront of Trump’s campaign is his promise to restore law and order as spurts of racial unrest erupt in America’s major cities and suburbs, as protestors believe that systemic racism exists within the police system.

The president’s campaign has barked that a Biden administration would only make the violence worse and destroy any sense of safety in the country. The vice-president has even referred to the Democratic nominee as a “Trojan horse for the radical left” that embraces “rioting and looting.”

"The hard truth is you won't be safe in Joe Biden's America. Under President Trump, we will stand with those who stand on the Thin Blue Line, and we're not going to defund the police – not now, not ever," Pence said at the Republican National Convention, referring to the "defund the police" movement that’s been associated with Biden’s campaign ideology.

Pence will continue to echo Trump’s vow to re-establish law and order — an argument that Trump supporters champion the president for — as the topic has been an area of unease for suburban voters where violence has persisted since the police killing of George Floyd.

Harris is a Flip-Flopper:

When Biden announced that Harris would be his running mate for the upcoming election, Trump’s campaign set fire to Harris’s candidacy, tagging her as a “phony” and a flip-flopper on policy positions during her prosecution career and her primary presidential run in 2020.

Trump’s campaign targeted her changed beliefs in supporting Medicare For All, legislation sought to provide health care for all individuals without needing to pay any out-of-pocket expenses and would abolish private health insurance. Harris served as a co-sponsor on the bill that was originally introduced by Sen. Bernie Sanders (I-Vt.) but later morphed her views on the legislation, as she released a new health care plan that included room for private insurers.

In 2010, Harris served as San Francisco’s district attorney and rejected a ballot proposal that would call for the legalization of marijuana in the state of California, deeming the bill a “flawed public policy.” Eight years later, Harris reversed her opinion and advocated for the Marijuana Justice Act that would make marijuana legal at the federal level.

Harris has earned the reputation of being a flip-flopper on Capitol Hill, a measure that Pence could likely use to his advantage at the Veep debate. How can Harris be trusted in the second-highest public office if she can’t commit to a certain ideology?

Although it might not be a pre-planned topic selected to cover at the debate, it’s likely that Trump’s tax revelations will come up in the midst of arguing.

The explosive unraveling of the New York Times report last week revealed that Trump paid no income taxes for ten of the fifteen years prior to getting elected in 2016, and just $750 in 2016 and $750 in 2017. The report sparked numerous questions about Trump’s finances. Records show that the president owes over $400 million in loans and debts, with most of it having to be paid during his second term in the White House if elected in November.

With the president dealing with his own coronavirus recovery, Pence will have to respond to the president’s concerning tax bill. But as his running mate, he can shimmy around the big tax question since he isn’t the president and instead, divert the jabs to the fact that a Biden administration seeks to raise taxes on Americans making a salary of more than $400,000.