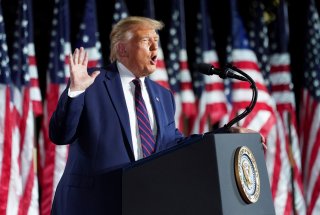 President Donald Trump addressed a maskless crowd of supporters on the White House lawn during the last night of the Republican National Convention, where he formally accepted the party’s presidential nomination for the upcoming election. According to Trump, the convention had “great ratings,” as he clapped at his own accomplishments from his first presidential term and slammed Democratic nominee Joe Biden.

Both the Republican and Democratic conventions have proven to be historic—the country is experiencing a time of extreme uncertainty as the coronavirus pandemic struck the US in March, leaving thousands of Americans unemployed and infected with no clear end in sight. Democrats led the first virtual convention last week, as speakers sent pre-recorded messages praising Biden’s campaign.

As the race continues to tighten in some crucial, battleground states with the election nearly two months away, the two candidates’ respective nomination acceptance speeches crushed the other, striking at the faults, mistakes and potential threats the competitor could bring if elected in November.

In 1992, Bush ran for reelection, despite the backlash he received from conservatives for breaking his promise from four years earlier at the GOP convention. “No new taxes” — three words that helped him grasp the win in 1988 also made him suffer a harsh defeat against former President Bill Clinton.

At the party’s convention in 1992, he referred to the bipartisan legislation on raising taxes as a mistake.

Bush blatantly attacked his political rival—a tactic that proved to be unsuccessful for the Republican nominee since he lost the election to Clinton. It's ironic, considering Trump and Biden mirror this method, publicly ousting and jolting at the other for their failures in the national spotlight.

"One of the most instructive lessons here is, don't go after your opponent by name, and also be blessed in not having opposition in your own party. And this President Bush is blessed that way," NPR News Analyst Cokie Roberts told NPR.

Although he won the election by a landslide, the statements from his convention speech came back to haunt him throughout his term, when he agreed to a bipartisan budget that actually increased taxes. Fiscal conservatives slashed Bush for being a flip-flopper, which likely diminished his chances of being reelected when he ran for president in 1992.

The speech came at a time of extreme budget deficits and spending issues, so when he broke his pledge to conservatives about “no new taxes,” his presidential candidacy grew distrusted, losing widespread support as his term in the White House advanced.

Ford—the only president to not get elected through the Electoral College system as he became commander-in-chief after President Richard Nixon resigned—struck at Congress during his GOP convention speech, words that resonated with some lawmakers, which prompted him to lose the 1976 presidential bid.

"I respect the convictions of those who want a change in Washington. I want a change, too. Let's change the United States Congress," Ford said during his nomination acceptance speech.

Ford pointed at Congress as the antagonist, where “change” must happen to improve the safety and order for the country.

Although the race between Ford and former President Jimmy Carter was tight, Ford tanked in the polls leading up to election day.

McGovern’s acceptance speech was considered a disaster, as the Democratic candidate didn’t take the stage until almost 3 a.m.

McGovern—who represented anti-Vietnam War and black civil rights activists—inherited new party rules during the election, enabling him to gain traction in the spring primaries and caucuses, which granted him the party’s nomination. His candidacy—similar to that of Trump’s—initiated “Stop McGovern” movements that attempted to block him from office. At the roll call vote, nearly 40 percent of delegates didn’t vote for McGovern, diminishing his chances of winning the White House that November.

At the convention, where the party formally nominated McGovern as the Democratic presidential candidate and former Senator Thomas Eagleton of Missouri as his running mate, McGovern’s speech was significantly delayed as other contenders for the vice presidential spot refused to drop out of the running. The lack of compromise forced hours of speeches and a lengthy roll call on viewers, stalling McGovern’s speech until 3 a.m. At that time, when the candidate advocated for his “Come Home America” message, convention listeners had already left.

“This most unusual of conventions,” The New York Times dubbed it.

The McGovern-Eagleton ticket lost in a brutal defeat, where they only gained support from one state.

The 1964 presidential election occurred at a time when the country was outwardly polarized on a number of key social and political issues. That year, moderate Republicans wanted to stop Goldwater from receiving the party’s nomination, as he supported radical ideals including resisting the Civil Rights Act and encouraging military involvement against the Soviet Bloc. But, that didn’t happen.

Civil unrest flooded the country when Goldwater supporters mocked certain cultures and rejected policies that moderate Republicans advocated for. The days leading up to the presidential election were vicious, as a leader of the New York Young Republicans referred to a cold-blooded debate—where an intense scuffle almost happened in the crowd—as “horrible. I felt like I was in Nazi Germany.”

Fast forward to Goldwater’s infamous acceptance speech, when he said, "Extremism in defense of liberty is no vice… and moderation in the pursuit of justice is no virtue." Goldwater was condemned for leading a deepening divide within the Republican party, as his acceptance speech seemingly endorsed the concept of “extremism” where Americans who didn’t fully support the candidate felt unsafe, fearful and hated. His convention speech destroyed any chances of moderate Republicans backing his campaign in November, as he lost the Electoral College by more than 400 votes.