AOC Is Not Exactly a Fan of Joe Biden. Here's Why. 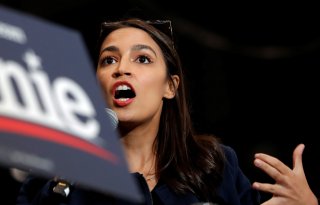 As he consolidates his support among the Democratic Party, presumptive presidential nominee Joe Biden has received endorsements from former challengers Bernie Sanders and Elizabeth Warren, along with former President Barack Obama. The most difficult figure to assuage, however, might be the party member nearly fifty years Biden’s junior: Alexandria Ocasio-Cortez.

The freshman congresswoman from New York blew up the country’s political scene when she defeated a ten-term incumbent in the 2018 primary. Since then the thirty-year-old has become one of the most recognizable politicians in the country, and a progressive superstar.

The self-described democratic socialist has little in common with Joe Biden, who spent decades building a career in the U.S. senate based on working across the aisle. “In any other country, Joe Biden and I would not be in the same party, but in America, we are,” groaned Ocasio-Cortez in January.

Nevertheless, she has not withheld her endorsement of Biden, although it comes with a heap of strings. “I’ve always said that I will support the Democratic nominee. But unity is a process, and figuring out what that looks like is part of this whole conversation that I think Bernie and Warren and other folks are a part of as well,” Ocasio-Cortez said on Monday. “The whole process of coming together should be uncomfortable for everyone involved—that’s how you know it’s working. And if Biden is only doing things, he’s comfortable with, then it’s not enough.”

If the goal was to make Joe Biden uncomfortable, Ocasio-Cortez accomplished that. On Tuesday during an internet stream, she said she supported having a discussion about the sexual assault accusation that has been leveled against Biden.

Biden is being accused by his former congressional aide Tara Reade, who claims that in 1993 the then-senator held her against a wall and sexually assaulting her consent. Biden has issued a full denial regarding the supposed event.

“I think a lot of us are just in this moment where it's like, how did we get here? You know, it almost felt like we started this cycle where we had kind of moved on from, you know, from all of this. And now it feels like we're kind of back in it," said Ocasio-Cortez, musing about the state of the #MeToo movement against sexual assault. "And, you know, the most diverse field that we've ever seen—that we're kind of back kind of replaying old movies in a way."