Can Mitch McConnell and Lindsey Graham Shake the Ghost of Merrick Garland? 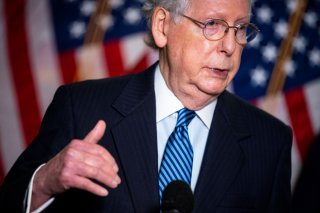 The news of Ginsburg’s death instantly ignited a feud over whether Trump and a GOP-majority Senate could fill the vacant seat before Election Day, as McConnell vowed shortly after the tragedy that he would push the president’s nominee on the Senate floor. Following McConnell’s remarks, Democrats launched attacks at the majority leader and other Republican lawmakers, as the GOP blocked President Barack Obama’s 2016 nominee, Merrick Garland, during the last few months of Obama’s presidential term.

In 2016, McConnell released a statement noting that “the American people” should vote for the next justice since the nomination was initiated in an election year. McConnell and his Republican colleagues, however, now claim that the circumstances were different in 2016 since the White House and the Senate were divided, being controlled by opposing parties.

“Apart from that one strange exception, no Senate has failed to confirm a nominee in the circumstances that face us now,” McConnell said Monday on the Senate floor, referring to Supreme Court Justice Abe Fortas, who served in the 1960s but later resigned. “The historical precedent is overwhelming and it runs in one direction. If our Democratic colleagues want to claim they are outraged, they can only be outraged at the plain facts of American history.”

McConnell referred to the incident in 2016, adding that Obama had requested “Senate Republicans for an unusual favor that had last been granted nearly 130 years prior.”

Senate Judiciary Chair Lindsey Graham (R-S.C.), who is running for reelection, has been working closely with McConnell to pave a clear path for a swift confirmation, but the chairman has also faced serious pushback from Democrats as he joined the Republican blockade in 2016. Graham said in 2016 that the court shouldn’t confirm a nominee during an election year, even if it meant rejecting a Republican president’s nomination. But his stance is a complete reversal from four years ago as he’s vowed to immediately work to press Trump’s nomination.

“I am certain if the shoe were on the other foot,” Graham wrote Monday to his Democratic colleagues on the judiciary panel, “you would do the same.”

“Why not just come to the floor and say I’m going to do whatever is best for my political party, consistency be damned, reason be damned, democracy be damned,” Schumer said. “They know there is no reason, no reason, no argument, no logic to justify flipping your position 180 degrees and calling it some kind of principle. It is not.

The vacancy set fire to a brutal fight between Republicans and Democrats, as Trump said he will announce his pick Saturday. McConnell now has a smoother path to deliver the nomination, especially since Sen. Mitt Romney (R-Utah) just released that he will vote to confirm Trump’s nomination.

In history, it’s unheard of to hold a Senate vote in regards to a Supreme Court nomination just days before a presidential election. It’s unclear if the upper chamber will be able to confirm a nomination before the election, as it’s less than two months away.

With only two Republican lawmakers reaching across the aisle to help blockade the nominee, Sens. Lisa Murkowski (Alaska) and Susan Collins (Maine), Democrats remain powerless in a 53-47 GOP-controlled Senate.

“How can we trust each other if when push comes to shove, when the stakes are the highest, the other side will double-cross their own standards when it’s politically advantageous,” Schumer said. “Tell me how this would not spell the end of this supposedly great deliberative body.”