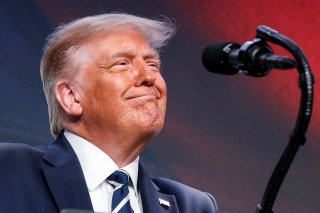 “As president of the United States,” President Richard Nixon said, “I would be untrue to my oath of office if I allowed the policy of this nation to be dictated by the minority who holds that point of view and who try to impose it on the nation by mounting demonstrations on the street.”

“And so tonight, to you, the great silent majority, my fellow Americans, I ask for your support,” he said on television in November 1969, catching a glimpse at the papers in his hands to remind him of his next thought.

“I pledged in my campaign for the presidency to end the war in a way that we could win the peace. I have initiated a plan of action, which will enable me to keep that pledge.”

Nixon’s famous “silent majority” speech served to push back anti-war peace activists who protested, sometimes violently, against America’s involvement in the Vietnam War. Deadly riots and violent protests scattered throughout America’s cities destroying any sense of unity the country had achieved. A war that had been begun by liberal elites during the Kennedy administration devolved into anarchy. Nixon’s promise—indeed, his mandate--was to restore order at home and extricate America from a hopeless war abroad. During his presidency, he was relentlessly attacked by the very foreign policy establishment that had originally plunged into the jungles of Vietnam.

During Nixon’s presidency, there was a large group of Americans, predominantly in the South, who supported the Vietnam War initiatives and opposed integration. Nixon popularized the phrase “the Silent Majority” to reach those voters who weren’t vocal like the anti-war demonstrators, and who weren’t radical. Instead, they were mainstream Americans who were revolted by the antics of the anti-war left. Nixon tried to capture the attention of those who wouldn’t publicly support the war and didn’t defend racist ideals but also weren’t actively involved in the civil rights era. Put otherwise, the broad “silent majority” craved order and stability and “wanted to conserve the status quo.”

At the time, the country was polarized on a number of key social and political issues—similar to the current political climate—as there was an unmanageable left and an assembled middle of Americans who strived for an organized political system. Most of this broad sector was made up of white Americans—some with a college education—who had fled the country’s major cities for a more suburban lifestyle, as part of the “white flight” movement that changed the domestic landscape of the country.

Before Nixon’s notable speech, he formed a group he titled the “Middle America Committee,” that was “deeply troubled, primarily over the erosion of what they consider to be their values.” This group believed they had “lost control of a complicated and impersonal society which oppresses them with high taxes, spiraling inflation and enforced integration.” Nixon welcomed the fears of the radical left overpowering social and political order, as he spoke with the group about “rapid cultural change, as well as its resentments toward those groups” that praised civil rights movements. Nixon was able to connect with that middle ground of voters who debated between supporting the Democratic or the third-party candidate in the 1972 presidential election. He won in a landslide, despite media outlets predicting the election would see a considerable shift to the left. Then, as now, the media often got it wrong.

President Donald Trump’s “silent majority” is different than that of nearly fifty years ago. In 2016, journalists, as well as the Trump administration, turned to this majority as the reason for his presidential win. However, Trump only won 46 percent of the electorate that represented 55 percent of the entire country—and most of his tight win was attributed to the support from swing states—which is different from Nixon’s overwhelming win.

Trump, however, has called on this supposed “silent majority” in 2020 to help him defeat Democratic nominee Joe Biden. The inconsistency in the historic and modern “silent majority” is that Nixon won it by discovering the common ground among voters, who didn’t preach radical ideas on either end of the political spectrum, but instead, sought stability.

Although Trump has pushed for law and order due to the political and social unrest dividing the country—like Nixon did in the late 1960s—he’s done so in ways that don’t necessarily appeal to the broad “silent majority.” It’s important to remember that Nixon won in 1968 by steering between George Wallace, on the right, and Hubert Humphrey, on the left. He was a shrewd and canny politician who sought out the mainstream. So far, Trump hasn’t proven that he’s willing to follow Nixon’s playbook--and work to find that middle ground.