Could Texas Actually Back Joe Biden in 2020? 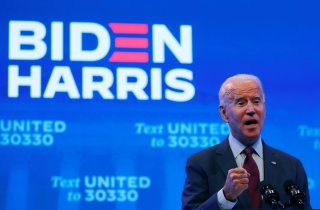 Virginia -- a state that voted red for nearly four decades -- supported former President Barack Obama (D) in 2008 and hasn’t turned back since. In the 2020 presidential race for the White House, the state will surely stand behind Democratic nominee Joe Biden who has maintained a double-digit edge over President Donald Trump since June.

In a tangled year filled with growing uncertainty over the deadly coronavirus, a strained economy and a divided Capitol Hill, the results of the presidential election are “more uncertain than any in modern history.”

Typically red states like Georgia, Arizona and North Carolina have landed a spot on the battleground map for this year’s election, as polls from each state reveal tight races with the candidates see-sawing for the leading spot. But another state just edged onto the list -- historically conservative Texas that’s sided with the Republican ticket since 1976.

“On the whole, it’s something that’s always been, kind of a Democratic dream of flipping Texas because it places the three largest electoral vote states in Democratic hands and can really be a linchpin for a Biden landslide,” John Cluverius, assistant professor of political science and associate director of the Center for Public Opinion at the University of Massachusetts Lowell, said.

Could Texas -- home to 38 electoral votes -- become a state like Virginia and back the Democratic ticket on Nov. 3?

Why It Could Happen:

The Cook Political Report and Inside Elections -- both well-respected election predictors -- changed Texas from tilting Republican in the 2020 race to being a toss up, significant shifts that indicate a blistering race in the southern state. While the RealClearPolitics Texas polling average between Trump and Biden shows the president ahead by 2.3 percent and the FiveThirtyEight polling average for the state reveals Trump leading by 1.3 percent, these are unfamiliar, small leads for the president that he didn’t experience in 2016.

“Classifying Texas as a toss-up is a change from past expectations for the state's elections. It just means that experts expect the Biden-Harris ticket is just as likely to win as the Trump-Pence ticket,” Mark Owens, assistant professor of political science at the University of Texas at Tyler, said. “The biggest reason for this uncertainty is that more Texans have voted in 2020 than 2016, however close to half of the registered voters in the state have still not cast a ballot with two days remaining.”

The 2016 election represented a low voter turnout year for Texans, as less than nine million voters in the state cast a vote for president, representing just 51.4 percent of the population of eligible voters, according to the United States Election Project -- that amounts to one of the lowest turnouts in the country. Fast forward four years, and more than 8.5 million Texans have already voted, almost surpassing the number of total ballots in 2016, and there’s still one more day of early voting.

According to The Texas Tribune’s election results data, estimated turnout in the state will be historic from anywhere between 10 million to 12 million.

“Texas is a must win for Trump,” Cluverius said. “It’s not a must-win for Democrats.”

In a recent poll conducted by The New York Times-Siena College, Trump reported a four-point lead over Biden among Texas likely voters. The president’s margin then puckered in a UMass Lowell survey of likely voters in the state to just one point.

According to a poll released Sunday by The Dallas Morning News and University of Texas at Tyler, Biden garnered a three-point advantage over Trump, opening a sizable opportunity for the Democratic ticket to welcome Texan voter support.

“The recent competitiveness of states like Texas and Georgia in the presidential election, speaks more to how the electoral map has shifted in southern states that have growing populations,” Owens said. “Both states have large populations of independent voters who in difficult times like this often begin to vote against the incumbent.”

More than 16.9 million Texans registered to vote for the Nov. 3 election, a 1.9 million-person jump in voters compared to the 2016 presidential election.

Experts suggest that fluctuating demographic and economic trends “appear to be rising the Democratic vote in the state,” according to Stephen Ansolabehere, professor of government and director of the Center for American Political Studies at Harvard University, said.

“The gains that Trump has made among Hispanic voters, particularly Hispanic men, have not reliably played out in Texas the way they’ve played out in other states like Florida,” Cluverius said.

“The thing about Texas is that for any Republican, it’s good because Texans have voted reliably Republican for so long,” Cluverius added. “The reason it’s particularly good for Biden and particularly dangerous for Trump are all of the demographic trends are really on Biden’s side.”

The Latino vote will be crucial for this election, particularly in competitive races in swing states like Arizona and Florida, as the group makes up the “largest nonwhite eligible voting bloc in the country.” While Biden has towered over Trump among Hispanic women, according to recent polls, the race for the Hispanic male voter support favors the president.

In polls conducted by Equis Research in Arizona and Nevada, Trump leads Biden in terms of Hispanic male voters.

Despite these findings among minority voters across the country, Sen. Ted Cruz (R-Texas) acknowledged that the race for the Lone Star State’s electoral votes could be a slight battle for Trump.

Back in 2018, Senate Democratic candidate Beto O’Rourke experienced a “closer-than-expected defeat” against Cruz, as the political underdog lost by less than three percent. The Times reported that Cruz warned Trump to take the race against Biden seriously: “There’s no doubt that it’s a real race.”

With the demographics shifting to have more Hispanic residents in the state, there has also been a surge in urban and suburban voters, as well as first-or second-time voters who tend to be less conservative.

“Both have sizable suburban populations, including college-educated White Republican and Independent voters who are turned off by Trump; many showed that in 2018 and if anything they are more turned off now,” Norman J. Ornstein, a resident scholar at the American Enterprise Institute, said, referring to Texas and Georgia.

Experts also said that the coronavirus -- which has killed nearly 20,000 people in the state and infected more than 938,000 -- has also impacted the Texan vote.

“This election changed with COVID. Before COVID this looked like a strong Republican year,” Ansolabehere said. “The election was thrown into chaos with the outbreak in March, and as it dragged into summer, the electorate realigned.”

Ornstein echoed Ansolabehere’s remarks, adding that the pandemic made a difference, especially among “older voters,” but noted it’s “still an uphill battle for a Democrat in either state, in part because of obstacles to voting, from Texas's Voter ID law to Georgia's limited polling places and machines.”

With the continuous uncertainty of 2020, Trump, however, could grasp a historically expected Texas win and resume his spot in the Oval Office on Nov. 3.

But Cluverius asked: “The question is, how resilient are these shifts and how much are suburban Biden voters of every color willing to stick with the Democratic party long term?”

In other words, will Texas behave like Virginia and switch blue after decades of voting red?