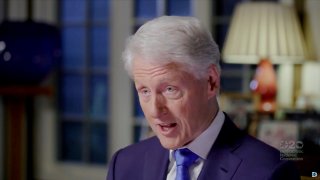 Viewership for the Democratic National Convention experienced a massive drop, yet again.

On the second night of the convention, major broadcast and cable news networks ABC, CBS and NBC rallied about 6.13 million viewers, according to preliminary data -- a 48 percent drop compared to the same night at the convention in 2016.

The Nielsen Media Research figures from Tuesday come after the trio had a combined 6.7 million viewers for the first night of the convention, a 42 percent decrease from the same night at the 2016 convention.

The massive plummet in TV viewership is not surprising considering the event wasn’t live in a convention hall thanks to Coronavirus concerns and because there has been a steady decline in watching cable and other pay-tv news with the emergence of online streaming platforms.

Democratic presidential nominee Joe Biden’s spokesperson, T.J. Ducklo tweeted Tuesday that digital viewership spiked in comparison to 2016 and the Biden campaign is “producing a digital convention, and people are watching.”

The Republican National Convention is slated to take place next week, with President Donald Trump to give the party’s presidential nomination acceptance speech on the South Lawn at the White House, joined by a socially distanced crowd.