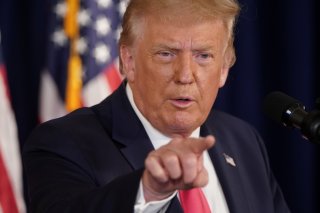 President Donald Trump understands full well that when it comes to presidential elections it is generally the economy, stupid. He also knows that in November, when he goes to the polls, he will be doing so with the United States still experiencing its worst economic slump and its highest unemployment rate in the last ninety years.

Yet despite the economy’s sorry state, Mr. Trump is far from throwing in the towel on the economic issue. Instead, he is hoping that electors will ask themselves not whether they were better off today than they were four years ago, but rather whether they were better off now than they were six months ago at the COVID-19 pandemic’s economic low point. At the same time, Mr. Trump is trying to cast himself as someone who is actively doing something responsible about the economy in contrast to an obstructionist and spendthrift Democratic Congress.

The main risk for Mr. Trump’s strategy is that his Executive Order might fall well short of what is now needed to avoid a double-dip economic recession before the election. Heightening the chances that this could occur is the pandemic’s recent resurgence, coupled with dire warnings from U.S. health experts about a likely second wave this fall. This now already seems to be halting the U.S. economy in its tracks. As Federal Reserve Chairman Jerome Powell recently noted, high-frequency economic data on consumer demand as well as disappointing employment figures are suggesting that the U.S. economy might already be plateauing at an unacceptably high unemployment rate.

It is not just that many states are responding to the pandemic’s recent resurgence by rolling back at least in part the earlier lifting of their lockdowns. Rather it is also that individuals are adjusting their behavior in a manner that is putting renewed pressure on those very sectors of the economy that have been hardest hit by the pandemic. With the pandemic raging, the American public once again appears to be increasingly reluctant to travel, frequent restaurants, or engage in indoor shopping.

It is far from clear that Mr. Trump’s Executive Order will do much to kickstart the economy. Employed workers receiving temporary payroll tax relief will know that this is only a tax deferment that will have to be paid soon after the election. As such, they are likely to be very cautious about spending that temporary windfall especially in an environment of great economic uncertainty about their future job prospects. Meanwhile, those 15 million cash strapped unemployed workers, who now will be receiving only half the weekly supplement to their benefits that they were receiving before, are bound to be forced to cut back heavily on their spending.

It is also well known that investors abhor political uncertainty and gridlock. One would think that Mr. Trump’s showdown with the Democrats might confirm investors’ worst fears about the U.S. becoming ungovernable and might induce them to scale back on their investment plans before we get greater political stability. At the same time, the severely cash strapped States, to which Mr. Trump is denying support and asking them instead to foot a quarter of the bill for the weekly unemployment supplement, are being forced to slash spending to balance their budgets.

While there certainly is room to debate whether or not the U.S. economy will have another leg down before the November election, of one thing we can be certain. If the US economy falters again, Mr. Trump will be the last to take the blame. Rather he will be pointing fingers at Nancy Pelosi and Chuck Schumer for their failure to strike a deal with him on a bipartisan stimulus package.