Donald Trump Won’t Debate Virtually. That Could Come Back To Haunt Him. 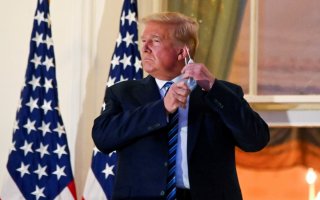 No sooner did the vice-presidential debate end than Donald Trump moved to recapture the spotlight. His opportunity arrived with the Commission on Presidential Debate’s announcement Thursday that the second debate between President Donald Trump and Democratic nominee Joe Biden will be virtual, after the president tested positive for the coronavirus last week. “The second presidential debate will take the form of a town meeting, in which the candidates would participate from separate remote locations,” the commission said in a statement, citing the priority to “protect the health and safety of all involved.” But Trump announced that he has no intention of participating. Is it a shrewd tactical move --or is he simply throwing a temper tantrum that will make him look scared to debate Biden again?

“I'm not going to do a virtual debate,” Trump told Fox Business Thursday morning, adding that it’s “not acceptable to us.” “No, I'm not going to waste my time on a virtual debate,” the president said.The president added that he doesn’t “think I’m contagious” with COVID-19. But Centers for Disease Control guidelines state that its prudent to wait 10 days before engaging in contact with anyone.

Biden’s campaign responded to the shift in format, saying that the former vice-president will participate in the virtual second presidential debate. “Vice President Biden looks forward to speaking directly to the American people and comparing his plan for bringing the country together and building back better with Donald Trump's failed leadership on the coronavirus that has thrown the strong economy he inherited into the worst downturn since the Great Depression,” deputy campaign manager and communications director to the Biden campaign Kate Bedingfield said in a statement Thursday morning.

The commission’s announcement follows Biden’s remarks that “we shouldn’t have a debate” if Trump remains infected with the virus. Biden noted that he would consult medical experts before engaging in an in-person meeting with the president.

“I think we were gonna have to follow very strict guidelines. Too many people have been infected. It’s a very serious problem, so I will be guided by the guidelines of the Cleveland Clinic and what the docs say is the right thing to do,” Biden said Tuesday night.

Public health experts have advised that the two candidates, both over the age of 70, should not participate in an in-person debate, as the president could still remain infected and encouraged considering alternatives for it.

Trump says he wants to do a rally rather than a debate. But he may have miscalculated. There is a historical precedent for a virtual debate. John F. Kennedy and Richard M. Nixon engaged in one for their third encounter. In spurning the second debate, Trump could hand Biden the opportunity to pose as someone who is unafraid to confront the president.

But it is also possible that Trump is trying to engage in a maximum negotiating position, walking away from the table, as he has advised in his own books, before trying to settle for a better deal. The battle over the debate could prove as bitter as the debate itself. With Trump on the political defensive, he continues to seek every advantage he can extract, whenever and wherever he can.

Image: U.S. President Donald Trump pulls off his face mask as he returns to the White House after being hospitalized at Walter Reed Medical Center for coronavirus disease (COVID-19), in Washington.