Donald Trump's Poll Numbers Are Awful. Could the Presidential Debates Save Him? 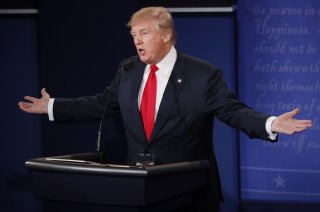 The first time President Donald Trump and presumptive Democratic presidential candidate Joe Biden steal the national spotlight is nearly two months away. In recent weeks, polls revealed Trump’s support has taken a tailspin, with voters disappointed in his handling of the coronavirus pandemic and the deepening economic crisis.

The debate, expected to take place on Sept. 29 at the University of Notre Dame in Indiana, according to the Commission on Presidential Debates, might be Trump’s only chance to convince Republican voters who’ve abandoned him, to unite with the party again, while also picking up key swing voters in the hopes of getting back into contention. But, some experts say that presidential debates can’t swing an entire election.

“On this basic question, which is ‘do debates actually affect who people vote for,’ there’s very little evidence that debates do just that,” Dr. Ethan Porter, author and professor at George Washington University, told the Niskanen Center’s “Science of Politics” podcast. “And there’s good reason to believe given the mounds of research on small media effects that any single debate in any single post-debate coverage isn’t likely to affect most voters attitudes.”

Porter said that post-debate commentary also doesn’t have much of an effect on the decision of the voter, according to an experiment he conducted in 2016. He “incentivized” some participants to watch Fox News and others to watch MSNBC. Porter discovered that MSNBC viewers “were significantly more favorably inclined toward Hillary Clinton,” while those that watched Fox supported Trump. But, the study concluded that different types of news coverage had little direct impact on vote choice.

Debates do matter, but they can’t change the outcome of a whole election.

“Though reporters often look for a winner and loser, viewers experience the debate differently, making two simultaneous judgments - one, whether or not the candidate seems ‘big enough’ to be president and two, whether one of the candidates is a better choice,” Denise-Marie Ordway and John Wihbey wrote for Harvard University Kennedy School’s Journalist’s Resource.

They pointed out debates tend to boost voter knowledge and confirm party positions.

The first presidential debate will show Trump and Biden go head-to-head on a number of ideological issues. It’ll give voters a chance to see how they operate under pressure and how certain applause lines and statements can impact a viewers’ judgement.

“The debates are only one communications data point in the campaign - taking place amid a sea of ads and other cultural conversations - and are difficult to disentangle from other dynamics,” Ordway and Wihbey wrote.

A series of debates may strengthen Trump’s current support base, but, according to experts, his performance on stage probably won’t increase his chances of winning the elections.

October will be flooded with debates, as Trump, Biden and their VPs take the stage and speak to a national audience.

The University of Michigan was supposed to host the second debate on Oct. 15, but recently announced that due to COVID-19, it’ll no longer welcome the candidates to its campus. University president Mark Schlissel said, “Given the scale and complexity of the work we are undertaking to help assure a safe and healthy fall for our students, faculty and staff and limited visitors - and in consideration of the public health guidelines in our state as well as advice from our own experts - we feel it is not feasible for us to safely host the presidential debate as planned.”

The third debate is expected to take place at Belmont University in Tennessee. There will also be a vice presidential debate in early October.

After months of rejecting to participate in the debates, Trump officials are now proposing a fourth one. Trump’s team believes, the “more he talks, the better off we are,” referring to Biden.

Trump officials see debates as an advantage to ramp up lost support in the polls, but the president wants a strong say in who’s moderating them.

“We want fair debates. We want them sooner, and we want a bigger schedule. We also don’t want them up against football games competing for viewers. As many Americans as possible need to see the stark differences between the accomplishments and leadership of President Trump and the failed record and sleepiness of Joe Biden,” Brad Parscale, Trump’s former campaign manager who was recently demoted, said.
Rachel Bucchino is a reporter at the National Interest. Her work has appeared in The Washington Post, U.S. News & World Report and The Hill.