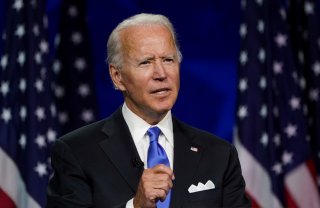 Democratic nominee Joe Biden has held a striking national lead over President Donald Trump for most of 2020, but recent polls suggest that crucial, battleground states are ticking in favor of the president, as the race for the White House bid inches closer.

Compared to polling averages from the 2016 election, Trump is polling slightly higher against Biden in battleground states than against then-Democratic nominee Hillary Clinton, indicating a more competitive race, according to RealClearPolitics.

In heated Michigan, the race has moved closer, as Biden held an average polling lead of 8.4 percentage points on July 28, which dropped to 2.6 percentage points just one month later. At this point in the race in 2016 in Michigan, RealClearPolitics revealed Clinton had more than an 8-point lead, but Trump proved to swipe the traditionally blue state on election day.

Wisconsin polls—another state that Clinton was predicted to win in 2016 but brutally lost—show the state trending red, as Biden only had a 3.5-point margin over Trump on Aug. 26. Compared to Trump’s average polling support from Wisconsin in 2016, his numbers are about 6.5 percentage points more in 2020, indicating that the battleground state may vote to reelect the president in November.

Trump is expected to visit Kenosha, Wisconsin after violent protests plagued the city due to the police shooting of Jacob Blake—who was left paralyzed from the waist down. Trump seized the opportunity to meet with local law enforcement and business owners to monitor the damage done by riots. As a battleground state, his visit could prove to be effective, especially since the race for the state’s support is tightening.

Trump told reporters his visit “could also increase enthusiasm and it could increase love and respect for our country,” according to USA Today.

In Pennsylvania, however, Biden still maintained an average polling lead of 4.7 percentage points on Aug. 29—a margin that’s been fairly consistent despite dropping nearly one full percentage point in just one day, according to RealClearPolitics. As another traditionally Democratic state, Trump’s win from the battleground state in 2016 shocked polling analysts, reporters and even Clinton.

Some Republican strategists suggest that the tightening race is due to the clear partisan divide that exists in the country. Even after the Democratic National Convention, Biden didn’t gain a dramatic boost in the polls, which was predicted by some polling analysts and researchers.

As election day moves closer, voters are taking the race more seriously and are clearly picking who to back on the presidential ticket.

Biden’s chances of winning the election have declined to 69 percent in comparison to two weeks ago, as FiveThirtyEight projected Biden’s odds of winning at 73 percent on Aug. 23.

In North Carolina, the race has also boiled as the candidates take turns in the leading spot. As of Aug. 29, Trump holds a tiny 0.3 percentage point margin over Biden, but at the beginning of August, Biden trolled over the president, holding nearly a 5 percentage point average polling lead, according to RealClearPolitics.

When Trump and Clinton were in the political-boxing ring, the two danced around the first place spot in North Carolina, as Clinton held an average lead for most of August before Trump grabbed the majority of support in September. On election day, the state swung red, helping push the current president in the White House.

Back in 2016, Trump held a consistent lead in battleground Arizona, even though the margin was never above roughly four percentage points. Four years later, Arizona’s average polls have switched to blue, but recent surveys suggest Biden losing traction in the traditionally Republican state. Biden reported an average polling lead of just 2.2 percentage points as of Aug. 23 over the president, compared to one month earlier with a 4.6 percentage point advantage.

Some Republican strategists think that Biden’s reluctance to travel amid the coronavirus could be impacting his presidential campaign. Most of his campaign events have been virtual, without him leaving Delaware, which could be a reason for the tightening race.

With the election nearly two months away, the polls seem to be unpredictable as just last month Biden had a substantial polling lead over the president. The real election results remain up-in-the-air as the coronavirus pandemic and economic crisis continues to plunge the United States.