Elizabeth Warren Would Be a Bad Choice for Vice President 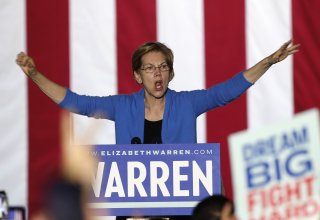 Super Tuesday was most likely one of the worst nights in Sen. Elizabeth Warren’s (D-Mass.) political career.

Warren didn’t just do poorly across the board; she finished the race a distant third behind Joe Biden and Sen. Bernie Sanders (I-Vt.) in her home state during the Democratic presidential primary. The finish was perhaps her strongest one of the night, considering she didn’t win a single state.

Disastrous is an understatement. Headlines thwarted her campaign and poll numbers for the senator tanked.

Nearly five months later and Warren is rumored to be on Biden’s shortlist for vice president -- a decision that’s left Democrats boiling in suspense as the Democratic National Convention is less than two weeks away.

Would a Biden-Warren ticket end Donald Trump’s presidency in November? Probably not.

Warren is obviously qualified and can do the job, as she’s a veteran on Capitol Hill as well as created the Consumer Financial Protection Bureau, where she acted as a special advisor under the Obama administration. Biden has actually shifted some of his policy proposals as president to be more progressive, thanks to Warren's influence and her ability to coax the former vice president -- especially regarding student-loan-debt cancellation and widening social security benefits. The two have huddled frequently over the last few months, collaborating to create a strong path to economic recovery if Biden is elected as president.

Since the meeting, Biden and Warren have developed a strong relationship -- despite their avid disagreements regarding bankruptcy law that erupted nearly 15 years ago -- allowing Biden to welcome progressive, loyal supporters who were pro-Warren as well as pro-Sanders.

Warren even headlined a virtual fundraiser for Biden’s campaign, bringing in $6 million, which was one of the highest figures the presumptive nominee has raised from a single event.

“We’re so lucky to have you one the front line,” Biden told Warren.

The fundraiser is ironic, however, since she refused to accept or host large fundraising events during her presidential run.

As vice president, Warren would be a fast thinker and understands the pressures of being in the national political spotlight. On the debate stage earlier in the year, she dodged and shot verbal bullets at her rivals, jabbing Michael Bloomberg and avoiding tough questions on her health care reform plan.

During primary debates, Warren steered clear of answering whether her healthcare plan would raise taxes on the middle-class, but Sanders -- a similar politician in terms of ideology -- said Medicare for All would, in fact, raise taxes on middle-class Americans. Warren started losing voters. Her campaign became healthcare-centered. At that point, she no longer appealed to many Democrats and progressives.

Warren’s political stances mirror Sanders and are strictly progressive, which could worry moderates within the party. However, there are benefits to a big tent mentality and Biden likes diversity -- he’s hired staffers from Warren, Sen. Kamala Harris (D-Calif.), Pete Buttigieg and former Texas Rep. Beto O’Rourke. Biden’s commitment to engage more than just one faction of the party has enabled him to gain support from moderate Democrats and even some independents. Recent polls reveal that Biden holds a consistent lead over Trump with the election just three months away.

Considering Warren’s ideals, she doesn’t exactly align with Biden. She’s a progressive political figure that doesn’t please other factions of the Democratic party, which Biden needs to win the election. It’s also rumored that a woman of color is needed to lock in more minority voters.

At the top of Biden’s shortlist are two prominent black women -- Harris and Susan Rice -- both of which can rally support from Black voters and especially Black women. Selecting a black running mate and then potentially getting elected would be historic and the first time an African American woman would serve at that high of a political office.

Although Warren would make history being a female, she doesn’t command as many minority voters as a woman of color could. Biden also doesn’t need her home state’s votes, as winning Massachusetts seems all but certain.

Biden needs a running mate who’s willing to adapt to more moderate policies and attract minority votes needed to defeat Trump in November. In just about a week, America should expect to know who Biden’s pick will be, but it most likely won’t be Warren.